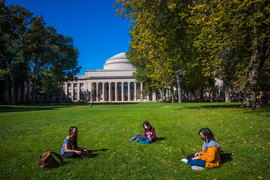 ↓ Download Image
Caption: In a year of challenges and opportunities, 2020 at MIT was a time for reflection, innovation, and reaffirmation of the Institute’s values.
Credits: Image: Gretchen Ertl

Caption:
In a year of challenges and opportunities, 2020 at MIT was a time for reflection, innovation, and reaffirmation of the Institute’s values.
Credits:
Image: Gretchen Ertl

We’ve reached a reflective time in an especially reflective year for the MIT community. The challenges of 2020 have been unique, shaped in countless ways by the Covid-19 pandemic, renewed calls for social justice, an unprecedented election cycle, and more. Here are some of the top stories in the MIT community this year.

Like everyone else, the Institute was forced to reckon with the Covid-19 pandemic — though it accomplished this with a distinctive MIT flair that included high-impact Covid-19 research; faculty creating new modes of teaching; heroic efforts from MIT Medical, including the development of unique testing facilities; the virtualization of everything from Campus Preview Weekend to Commencement to the Great Glass Pumpkin Patch; MIT-affiliated startups working to solve challenges brought on by the pandemic; and creative community-building efforts from students and others, including MIT Minecraft and a revamped first-year orientation.

The Institute recommits itself to supporting racial justice

Shortly after MIT hired a new Institute Community and Equity Officer, John Dozier, the community mourned together in the aftermath of high-profile killings of Black Americans at the hands of law enforcement. President Reif followed up with renewed commitments to address systemic racism at the Institute, and activist and scholar Angela Davis spoke with community members about the work ahead.

Astrophysicist and Professor Nergis Mavalvala is renowned for her pioneering work in gravitational-wave detection, which she conducted as a leading member of LIGO, the Laser Interferometer Gravitational-Wave Observatory. In September, Mavalvala was appointed to serve as dean of the MIT School of Science, becoming the first woman in this role.

MIT and Harvard University filed a lawsuit challenging a policy that would have had the effect of banning any international student with an F-1 student visa if their classes were fully online as a result of Covid-19. The policy, which was issued by the U.S. Immigration and Customs Enforcement (ICE) and the Department of Homeland Security, was rescinded shortly after the lawsuit was filed.

Standing by its commitment to provide equitable and open access to scholarship, MIT ended negotiations with Elsevier for a new journals contract. Elsevier was not able to present a proposal that aligned with the principles of the MIT Framework for Publisher Contracts, which is grounded in the conviction that openly sharing research and educational materials is key to the Institute’s mission of advancing knowledge and bringing that knowledge to bear on the world’s greatest challenges.

Astronomer and Department of Physics alumna Andrea Ghez ’87 shared the 2020 Nobel Prize in Physics “for the discovery of a supermassive compact object at the center of our galaxy.” Ghez is known for her pioneering work using high spatial-resolution imaging techniques to study star-forming regions and the supermassive black hole known as Sagittarius A* at the center of the Milky Way Galaxy. She is the fourth woman to win a Nobel Prize in the physics category and the second MIT alumna to win a Nobel.

The Media Lab charts a course for the future

Today, the Media Lab announced the appointment of its new director, Dava Newman. The move serves as an important step in the lab’s plans to rebuild a culture of trust and support while retaining its culture of creativity. Earlier in January, a third-party review of MIT’s engagements with Jeffrey Epstein shed light on the Institute’s actions pertaining to Epstein donations that MIT received between 2002 and 2017, as well as visits that Epstein made to campus. MIT subsequently made donations totaling $850,000 to nonprofits supporting survivors of sexual abuse, while the Media Lab took initial steps toward establishing a supportive culture through self-examination and group discourse.

Charles Stewart, Ariel White, Adam Berinsky, and others from around the Institute provided important viewpoints on this year’s historic elections — from the election process to voting rights to assessing voter intent — while students and others around the community led civic engagement efforts, including nonpartisan get-out-the-vote campaigns.

In case you missed it…

Additional top community stories of 2020 include the MIT Task Force on the Work of the Future final report; a warning about deepfakes using art and artificial intelligence; the selection of four MIT-connected astronauts as the next possible moon walkers; a new approach to sustainable buildings in Boston; and MIT students (again!) dominating the Putnam Math Competition.