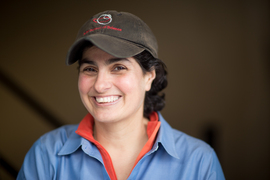 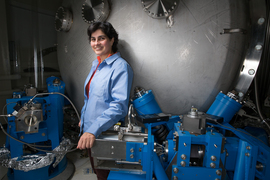 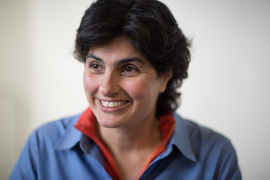 Caption:
Nergis Mavalvala, the Curtis and Kathleen Marble Professor of Astrophysics, has been named the new dean of MIT’s School of Science.
Credits:
Photo: Bryce Vickmark

Astrophysicist Nergis Mavalvala has been named the new dean of MIT’s School of Science, effective Sept. 1. She will succeed Michael Sipser, who will return to the faculty as the Donner Professor of Mathematics, after six years of service.

Mavalvala, the Curtis and Kathleen Marble Professor of Astrophysics, is renowned for her pioneering work in gravitational-wave detection, which she conducted as a leading member of LIGO, the Laser Interferometer Gravitational-Wave Observatory. She has received numerous awards and honors for her research and teaching, and since 2015 has been the associate head of the Department of Physics. Mavalvala will be the first woman to serve as dean in the School of Science.

“Nergis’s brilliance as a researcher and educator speaks eloquently for itself,” says MIT President L. Rafael Reif. “What excites me equally about her appointment as dean are the qualities I have seen in her as a leader: She is a deft, collaborative problem-solver, a wise and generous colleague, an incomparable mentor, and a champion for inclusive excellence. As we prepare for the start of this most unusual academic year, it gives me great comfort to know that the School of Science will remain in such capable hands.”

Provost Martin Schmidt announced the news today in a letter emailed to the MIT community, writing, “I very much look forward to working with Nergis and to benefiting from her unerring sense of scientific opportunity, infectious curiosity, down-to-earth manner and practical wisdom. I hope you will join me in congratulating her as she brings her great gifts as a leader to this new role.”

As with most everything she takes on, Mavalvala is energized and optimistic about the role ahead, even as she acknowledges the unprecedented challenges that the school, and the Institute as a whole, are facing in these shifting times.

“We’re in this moment where enormous changes are afoot,” Mavalvala says. “We’re in the middle of a global pandemic and economic challenge, and we’re also in a moment, at least in U.S. history, where the imperative for racial and social justice is really strong. As someone in a leadership position, that means you have opportunities to make an important and hopefully lasting impact.”

Leading with heart and mind

For the past five years as associate head of physics, Mavalvala oversaw the department’s academic programming and student well-being. She implemented new, more flexible doctoral requirements and exams, and expanded the department’s digital learning portfolio with the development of online versions for a number of core subjects. She also introduced changes to the department’s undergraduate and graduate advising, and helped to set in motion an extensive mentoring program.

In collaboration with department head Peter Fisher, she co-founded the Physics Values Committee, a group of faculty, staff, and students who advise the department on issues of well-being, respect, inclusion, collaboration, and mentorship. The committee developed the department’s first values statement, which has become a model for departments and units across MIT, and at other universities.

Mavalvala launched initiatives to meet the department’s goals of education and advising, while aiming to reduce stress and workload on students, faculty, and staff. She also helped to revise the department’s graduate admissions procedures in order to increase equity and promote a more diverse student body.

Mavalvala has also made it a priority to listen to students, through town hall meetings, open office hours, and by including student representatives in key departmental committees.

“I have had the privilege of working with some amazing people,” she says of her time as associate department head. She credits the many students and colleagues she has worked closely with, especially Fisher: “Through him, I’ve learned about leadership with compassion, with heart.”

Mavalvala was born in Lahore, Pakistan, and grew up in Karachi. A tinkerer by nature, she often got up to her elbows in grease as she absorbed herself in the mechanics of bike repair. In school, she gravitated to math and physics early on, and her parents, strong advocates of both their daughters’ education, encouraged her to apply to college overseas.

At Wellesley College, she earned a bachelor’s degree in physics and astronomy, before moving to MIT in 1990, where she pursued a PhD in physics. Her advisor, Rainier Weiss, now professor emeritus of physics, was working out how to physically realize his idea of an interferometer to detect gravitational waves — minute disturbances rippling out through space from cataclysmic events millions to billions of light years away.

Mavalvala dove into the fledgling project, helping Weiss to build an early prototype of a gravitational-wave detector as part of her PhD thesis. Weiss’ idea would eventually take shape as LIGO, the twin 4-kilometer-long interferometers that in 2016 made the first direct detection of gravitational waves, a historic discovery that won Weiss and others the 2017 Nobel Prize in physics.

After completing her PhD work at MIT, Mavalvala went to Caltech in 1997 as a postdoc, studying the cosmic microwave background. In 2000, she joined on as a staff scientist at the LIGO Laboratory, where researchers were collaborating with Weiss’ group at MIT to build LIGO’s detectors. She spent two years with the Caltech team before accepting a position that took her back to MIT, where she joined the faculty in 2002 as assistant professor of physics.

Since then, she has helped to build up the MIT LIGO group, where she has worked to design and improve different parts of the interferometers. She also has led a team of scientists in developing tools to study and manipulate the barely perceptible quantum effects on LIGO’s massive detectors.

“To make an experiment like LIGO work, as large and complex that it is, takes the collaboration of hundreds of scientists, across geographical and cultural distances,” says Mavalvala, who sees useful crossover with her new role at the School of Science helm. “It’s good training for the dean’s position, because that’s going to require also spanning not just different fields of physics, but different fields of science, and learning the language of those fields.”

Mavalvala is a recipient of numerous honors and awards, including in 2010 the MacArthur Fellowship. In 2014, the National Organization of Gay and Lesbian Scientists and Technical Professionals recognized her as the LGBTQ+ Scientist of the year, and in 2015 she was awarded the Special Breakthrough Prize in Fundamental Physics, as part of the LIGO team. In 2017, she was elected to the National Academy of Sciences. That same year, the Carnegie Corporation of New York recognized Mavalvala as a Great Immigrant honoree. She is also the first recipient of the Lahore Technology Award, given by the Information Technology University, a public university in Pakistan.

Mavalvala is optimistic about the road ahead and credits her predecessors, and especially Michael Sipser, for paving the way.

“In some ways, the years leading up to the pandemic have been good years for MIT from the side of scientific discovery, and our impact on the world,” Mavalvala says. “I’m awed by the number of things that Mike has done and has left in good shape. I will always be grateful for that, and plan to carry on with the many things that work well, while also continually improving what we do and how we do it, as needs and demands shift.”

Since LIGO’s first detection of gravitational waves was reported in 2016, Mavalvala, with her deep passion for science and lively personality, has been sought after as a sort of unofficial ambassador to the public on behalf of astrophysics and STEM more broadly. Her identity as an openly queer immigrant woman scientist of color has also brought her public attention. As she takes on her new role, Mavalvala plans to continue to engage a wide audience with her passion for science and discovery.

“MIT is one of the top places in the world for doing cutting-edge science, and we will continue to maintain that eminence. At the same time, we also have to push on issues of diversity, issues of racial and social justice, and of work-life balance,” says Mavalvala, who is also a parent of two children. “There’s this idea at places like MIT that to be as excellent as we are in science and education, that has to come at the cost of all other aspects of being human. I reject that idea. So part of what I’d like to do, and part of my vision of a better MIT, is to find ways for those things to coexist, in good balance. I don’t have any illusions that some of these things will be harder to do, but it doesn’t mean we shouldn’t try.”

Prof. Nergis Mavalvala, dean of the MIT School of Science, speaks with Nobel Peace Prize laureate Malala Yousafzai about what inspired her love of science, how to inspire more women to pursue their passions and her hopes for the next generation of STEM students. “Working and building with my hands has always been something I’ve enjoyed doing,” says Mavalvala. “But I’ve also always been interested in the fundamental questions of why the universe is the way it is. I couldn’t have been more delighted when I discovered there was such a thing as experimental physics.”

Prof. Nergis Mavalvala, Dean of the School of Science, speaks with Becky Ferreira of Motherboard’s “Space Show” about LIGO’s 2015 discovery of gravitational waves and what researchers in the field have learned since then. “Every one of these observations tells us a little bit more about how nature has assembled our universe,” says Mavalvala. “Really, in the end, the question we're asking is: ‘How did this universe that we observe come about?”

Prof. Nergis Mavalvala has been named the new Dean of MIT’s School of Science, reports Zara Khan for Mashable. Khan notes that Mavalvala “is known for her pioneering work in gravitational wave detection,” and will be the first woman to serve as Dean of the School of Science.

Quantum fluctuations can jiggle objects on the human scale