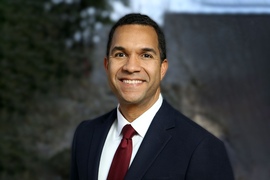 ↓ Download Image
Caption: John H. Dozier joins MIT as its new Institute Community and Equity Officer (ICEO). Dozier was previously at the University of South Carolina, where he has been serving as chief diversity officer and senior associate provost for inclusion.
Credits: Image courtesy of John Dozier, edited by MIT News

Caption:
John H. Dozier joins MIT as its new Institute Community and Equity Officer (ICEO). Dozier was previously at the University of South Carolina, where he has been serving as chief diversity officer and senior associate provost for inclusion.
Credits:
Image courtesy of John Dozier, edited by MIT News

After a nationwide search, MIT has named John H. Dozier, an experienced higher-education leader with significant expertise in the areas of diversity and inclusion, as its new Institute Community and Equity Officer (ICEO).

“I’m very excited to be joining the MIT community,” Dozier says. “I look forward to working with the students, faculty, staff, and alumni to continue the work of building and nurturing a sense of community and belonging at MIT.”

Dozier, who will officially start as the new ICEO effective March 15, adds that he is “honored to be part of such an amazing institution.”

“I am delighted to share the news that John H. Dozier … has agreed to become MIT’s next institute community and equity officer,” Reif wrote, adding: “John brings to this role an outstanding record of leadership, great personal warmth and a sense of curiosity, enthusiasm and experimentation that feel very MIT.”

At MIT, Reif noted, the ICEO “plays a special role: A thought leader on the subjects of community, equity, inclusion, and diversity and a focal point for organizing MIT’s related activities and conversations, the ICEO is also a hands-on practitioner who disseminates best practices and inspires the awareness and enthusiasm to help them flourish.”

Dozier will report to Provost Martin A. Schmidt, with a broad mandate to develop and implement diversity and inclusion strategies for the Institute, while leveraging the strength of existing initiatives and programs.

“We are very pleased to welcome John Dozier to MIT as our new Institute Community and Equity Officer,” Schmidt says. “John’s skills, perceptiveness, and track record of accomplishment all make him an ideal person to help lead our ongoing efforts as we create a fully inclusive environment for learning, working, and living.”

Dozier brings a breadth of higher-education experience to the ICEO role. He held a variety of leadership positions in the Chicago community college system, including vice president of academic and student affairs for Kennedy-King College and Wilbur Wright College; chief information officer for the entire system; and then president of Kennedy-King College. He joined the University of South Carolina in 2013. There, as chief diversity officer and senior associate provost for inclusion, he helped create and oversee strategy and programs to enhance diversity and inclusion for the state’s flagship university, with over 35,000 students. Dozier also received the Richard A. Rempel Faculty Award from the University of South Carolina in 2016.

As an undergraduate, Dozier received his BS in marketing from South Carolina State University, where he received the Distinguished Alumnus Award in 2015. He subsequently earned his MBA and EdD from DePaul University.

Dozier’s wife, Victoria, is a mechanical engineer. They have three children, who are currently in college, high school, and middle school.

A native of South Carolina, Dozier’s professional trajectory demonstrates the possibilities of social progress around campus communities. Dozier’s grandmother, growing up a few blocks from the University of South Carolina, in Columbia, would rarely venture onto the campus, feeling unwelcome there; yet she lived long enough to see Dozier become a leading administrator at the university.

In evaluating the path ahead for community-building at MIT, Dozier says he has been “extraordinarily impressed” by MIT programs such as MindHandHeart, an initiative that seeks new ways to pursue health, well-being, and inclusion for the campus community.

At the same time, he notes that improving inclusion issues is not just the responsibility of select groups, but a task for all of MIT.

“Issues of diversity, equity, and inclusion are best addressed when the entire community is engaged,” Dozier says.

Letter regarding MIT’s next Institute Community and Equity Officer

Bertschinger to leave post as Institute Community and Equity Officer