Bertschinger to leave post as Institute Community and Equity Officer 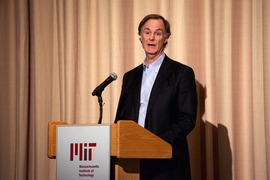 MIT professor Edmund Bertschinger is stepping down from his position as the Institute Community and Equity Officer (ICEO), as he begins a sabbatical this summer.

“I’m very proud to have worked with many dedicated staff across the Institute to help enhance their vision for inclusive excellence at MIT,” Bertschinger says. “MIT has a culture of collaboration, and that applies to diversity, equity, and inclusion as well.”

The announcement was made in a letter to the MIT community from Provost Martin A. Schmidt, who praised Bertschinger’s work in the role. “Thanks to Ed’s leadership, our community has come to embrace a vision of inclusive excellence that honors MIT’s deepest values,” Schmidt wrote.

Bertschinger is the first person at MIT to serve as ICEO, a position which was founded in 2013. MIT developed the office to advance activities and conversations in the areas of community, equity, inclusion, and diversity, for students, staff, and faculty.

During Bertschinger’s tenure as ICEO, the office has produced new action on many fronts, including analyzing diversity issues at the Institute, supporting a wide range of new MIT policies, and significantly increasing the number and profile of on-campus events that address diversity issues and lend support to members of the community.

“To help make a better world, we must work continually to make a better MIT,” says President L. Rafael Reif. “I believe that to thrive as a community, we must see our diversity as a welcome, obvious reality and a vital source of our creative strength. We created the role of ICEO to build mutual understanding across the community and to sustain our shared focus on increasing equity and inclusion. I am grateful to Professor Bertschinger for his dedication in taking on this challenge.”

Bertschinger drove the development and release of a 2015 report, “Advancing a Respectful and Caring Community: Learning by Doing at MIT,” that evaluated inclusion issues broadly, from the nature of everyday interactions on campus to matters of diversity in faculty hiring.

The report observed that until “we can embrace our diversity, exercise empathy, and advance caring and respect, we will never achieve our full potential as individuals or as an Institute.” The document included recommendations for building community, improving equity, and making structural reforms to enhance inclusiveness.

Under Bertschinger’s watch, updated data on diversity at MIT are also more readily available to the larger community than ever before.

“Ed is never better than when he is advocating for those without a voice, or those less able to speak, including those in our own community,” says MIT Vice President Kirk Kolenbrander. “He placed himself in the middle of many challenges and conversations at MIT, to create real improvement at the Institute.”

Bertschinger also contributed to the development of a long-term engagement between the MIT administration and multiple student groups, including MIT’s Black Students Union (BSU), and the Black Graduate Student Association (BGSA), as well as other members of the MIT community. As a result, after initial meetings in late 2015, the Institute has been acting upon a series of recommendations to implement new programs and resources.

“At MIT, we are not afraid to look at ourselves,” says DiOnetta Jones Crayton, MIT’s associate dean for undergraduate education and director of the Office of Minority Education. “Since the creation of the ICEO, we have seen much more open dialogue and discussion on issues related to diversity, inclusion, and equity. Ed Bertschinger’s leadership, along with the efforts of many groups on campus, has helped bring the community together to talk about these issues. We have made significant progress in many areas, but we must continue to build upon these efforts. There is more work to be done.”

As ICEO, Bertschinger ensured that his office had a multifaceted role, connecting with all parts of the MIT community and helping to raise the profile of many groups working for greater campus inclusion.

“For almost five years the ICEO has played an integral part in advancing issues of equity, inclusion, and social justice at MIT,” says Abigail Francis, director of LBGT Services at MIT. “During this time Ed and the ICEO office have been a critical source of visibility, resources, and support for the LBGTQ+ community. As one of the only centralized resources for equity and inclusion efforts, and as one of very few areas of broad-based support for marginalized populations, the ICEO has become an essential part of MIT’s mission.”

In addition to working on behalf of students and faculty, Bertschinger also saw himself as an advocate for MIT’s staff, and sought to ensure that staff members were equal partners in the Institute’s inclusion efforts.

“For the last nine years, I have had the privilege of working with Ed Bertschinger,” says Alyce Johnson, MIT’s manager of staff diversity and inclusion. “I appreciate Ed's contribution as ICEO; he brought a coordinating and reflective voice. His openness, support, and commitment to all members of the community made a difference. His leadership has been critical to advancing diversity, inclusion, social justice, and belonging to our community.”

Bertschinger received his BS in physics from Caltech in 1979, and his PhD in astrophysical sciences from Princeton University in 1984. He was a postdoc at the University of Virginia and a research fellow at the University of California at Berkeley before joining the MIT faculty in 1986. He served as head of the MIT Department of Physics from 2008 until 2013.

Reflecting on the advances the Institute has made during his time as ICEO, Bertschinger says that, speaking broadly, his main achievement is “to have helped change expectations around diversity, equity, and inclusion across MIT,” adding that a focus on these issues is “now a part of our institutional DNA.”

And, noting the surge in campus events dedicated to diversity and inclusion, developed by both the administration and student groups, Bertschinger notes that “the community has come to expect this level of engagement,” and now has many more opportunities for “candid conversations about race, gender, sexual harassment, inclusion, and what it really means to make a better world.”

In his letter to the MIT community, Schmidt described the next steps to fill the ICEO position: “In keeping with the importance of the role, the next ICEO will also be an MIT faculty member. As I begin the search process, I welcome your perspective and suggestions. Please write to iceosearch@mit.edu. I will treat any correspondence as confidential.”