MIT Media Lab charts a course for the future 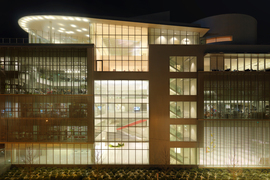 On a typical day, light floods through much of the MIT Media Lab building, with its see-through exterior, multistory atriums, and glass-walled interior workspaces. For the last year, members of the Media Lab community have been developing a community dialogue with the aim of making the lab’s culture and administration as transparent as its physical setting.

Indeed, the Media Lab, known globally as an innovation center, is now involved in another innovation, this time an internal-facing one. It is working to rebuild a trusting and supportive culture through self-examination and group discourse.

While focused on areas such as community trust, inclusion, and diversity, the lab is developing a series of organizational changes, with some already in place and others to be rolled out later this year and over the next few years. A search is underway for a new director who can articulate the lab’s shared vision, will hold the lab to the highest research and ethics standards, and is firmly committed to advancing the difficult work begun over the past year.

Part of this work has focused on a new governance structure with greater emphasis on lab-wide communication, including town halls, and enhanced policies for vetting incoming funding. The lab is also extending its operational connections within MIT, along the lines of existing cross-campus collaborations between the Media Lab, the MIT Schwarzman College of Computing, MIT Open Learning, and the departments of Earth, Atmospheric and Planetary Sciences, and Aeronautics and Astronautics.

“We see this moment in the lab’s history as an opportunity to improve the lab — to lay a solid foundation for the next 35 years,” says Pattie Maes, professor of media technology and chair of the Media Lab’s executive committee, which was formed last fall after the resignation of the lab’s then-director, Joi Ito.

Maes adds: “The town halls, for example, have been key to heightened engagement for a community of more than 400 people. So has the formation of five ongoing working groups, tasked with improving lab procedures across a range of areas: governance, funding, student-advisor interactions, lab culture, and research. Crucially, the working groups are all composed of faculty, staff, and students, to diversify the input and include perspectives of each group.”

The ongoing changes at the Media Lab date back to last September, after it was disclosed that Ito had accepted funding from, and hosted visits by, convicted sex offender Jeffrey Epstein. After Ito’s resignation, members of the Media Lab community, in concert with Institute leaders, began examining how best to move forward constructively. The goal was to work to overhaul the Media Lab’s operations and work environment while maintaining its unique and wide-ranging approach to research and innovation.

“As we reflect on our path forward, we are looking for a deeper kind of change — a change that will not only build a more connected, inclusive, and trusting community, but one that will also forge meaningful and creative cross-disciplinary research,” says Deb Roy, professor of media arts and sciences and executive director of the MIT Media Lab.

Ramona Allen, MIT’s vice president for human resources, notes: “At a time of great upset and mistrust, the Media Lab came together and focused on how to move forward in ways that support all members of the community — staff, students, and faculty. They faced complicated issues head on, worked incredibly hard, and had many difficult conversations. Everyone expects research creativity from the Media Lab, but all of us who worked with them during this time have been impressed by how creatively members of the lab have used their problem-solving skills to work on issues such as improving community culture.”

The lab’s work extends internationally through the more than 100 companies that have been founded by Media Lab faculty members, alumni, and research staff, and the more than 100 Media Lab graduates who have gone on to faculty positions at top institutions worldwide.

The new director will work closely with faculty members in defining the lab’s research direction and will be supported by the executive committee. At present, the executive committee consists of Maes; Roy; Tod Machover, the Muriel R. Cooper Professor of Music and Media and academic head of the Program in Media Arts and Sciences (MAS); Maria Zuber, MIT’s vice president for research; and Allen.

Roy, who also directs the Laboratory for Social Machines, describes the executive committee as “an incredibly important partner” to the director — one that will be “active and engaged, and can consult and provide oversight.” With Zuber and Allen on the board, he notes, “We have two of the top people at the Institute level, who care deeply about the Media Lab and are helping strengthen our connective tissue with other parts of the Institute.”

Maes notes that despite the Media Lab’s significant and rapid growth in size in recent years, its governance structure had not evolved much from when the lab was first created 35 years ago as a smaller, more close-knit entity, which left a great deal of decision-making power in the director’s office.

“Now we’re putting in place a structure more fitting for the larger and more diverse organization the Media Lab has become,” Maes says. “We’re working on ways to give the lab the benefit of lots of different opinions in making critical decisions associated with both research direction and lab culture.”

Earlier in 2020, the five working groups submitted an initial round of recommendations in each of their areas. The executive committee responded to the proposals, which have since been refined. The lab is working to implement concrete changes, which will be announced in more specific terms later this fall.

In the area of MIT Media Lab funding, for instance, the lab will continue to receive funding from a variety of sources, including member organizations, industry grants, directed government funding, foundations, and philanthropic individuals. However, the lab is in the process of changing its policies in collaboration with MIT’s central resource development office to more fully vet the people and organizations that support the lab, and will follow any revised Institute policies on accepting anonymous donations.

Other academic changes are being implemented this fall. These include changing the advising structure so that students have access to a second advisor, broadened input into graduate student admissions, stronger mentorship for junior faculty, and evaluations of research that are more integrated with MIT as a whole.

“The alignment is a challenge because of the disparate norms in the range of fields represented in the lab, so we are thinking really hard about criteria of evaluation,” Zuber says. “We consider it essential that the Media Lab retain its quirky, creative style that enables the development of ideas with real-world impact.”

Media Lab students involved in the process say they appreciate the participatory nature of the lab’s response, while acknowledging the work ahead.

“This is going to be a long and sometimes difficult process that engages the community in a lot of different ways, to make sure that everybody feels comfortable participating. I really appreciate that,” says Devora Najjar, a Media Lab PhD student and a member of the lab’s working group on culture. “It will take time, as well as a lot of active work to implement the working group recommendations and show that meaningful change is taking hold.”

The Media Lab also restricted its intake of students this year while implementing its set of adjustments.

“During this transition year, we have decided to limit student recruitment and admissions as we turned our efforts inward,” says Machover, a modern music pioneer and composer who heads the Lab’s Opera of the Future group. “This has helped strengthen the fabric of our academic mission as well as our sense of common culture. As we all feel more comfortable sharing our concerns and passionate visions, and believe that people across the lab are really listening, we gain a new energy — indeed a new synergy — that balances bold creativity with supportive critique to the benefit of our lab community, the rest of MIT, and beyond.”