Mary Frances Wagley, dedicated educator and the first woman to join the MIT Corporation, dies at 93 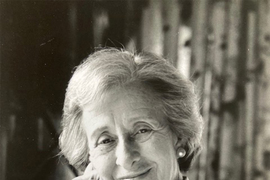 Mary Frances Wagley ’47, a trailblazer for women and a lifelong educator, died Nov. 1 at her home in Cockeysville, Maryland. She was 93.

“Mary Frances Wagley was a force for a better world and a pioneer for women in science and technology. She set an example with both her intellect and her leadership across an inspiring and impactful life. Everyone at MIT is fortunate to be benefitting from her path-breaking footsteps,” says MIT Corporation Chair Diane Greene, who is the first woman to serve in this role.

Wagley was born in New York City to Caroline and James Cash Penney, the founder of JC Penney. She grew up in White Plains on a small farm, often working outdoors with her father or riding her horse. Her skill as an equestrienne brought her as far as Madison Square Garden, where she competed at the National Horse Show.

Applying to MIT, one of the deans tried in an interview to talk her out of attending, saying he was sure she wouldn’t like it, Wagley told “MIT Infinite History” in 2009.

“Well, I proved him wrong,” Wagley told the interviewer. “I was happy from the moment I stepped foot in the Institute. … I was just ready to soak up all I could learn, and from the day I walked in those doors at 77 Mass. Avenue, it just seemed to me this is the place I belong.”

Wagley represented the first generation in her family to attend college. Wagley and a friend, Emily “Paddy” Wade ’45, lived off campus and cooked for themselves because there were no dormitories or dining facilities for women. Nor did athletic facilities exist for women at the Institute. Starting out as a chemical engineering major, Wagley was not able to participate in the required chemical engineering summer camp because of her gender, and she was asked to change her major to chemistry, which she did. Despite the challenges associated with being one of very few women at MIT, however, she flourished, says her son, Jay Wagley SM ’89.

“My mom was a force. I think it was hard to be one of only 12 in her class, but she never shied away from a challenge,” he says. “She had a spectacular mind and enormous intellectual curiosity. I think having gone to MIT and having done well there gave my mom tremendous confidence.”

MIT also imbued Wagley with a sense of the importance of science and engineering in society. Speaking with a reporter for the “MIT News” section of MIT Technology Review, she recalled how on V-E Day, May 8, 1945, MIT President Karl Compton celebrated the Allied victory with students but then sent them back to class, telling them their skills were needed for the continued fighting in the Pacific and for reconstruction after the war.

“I guess this was the first time I felt important,” Wagley was quoted as saying.

After graduating from MIT, Wagley went directly to Oxford University, earning a doctoral degree there in physical chemistry. At the time of her return to the United States, she had two employment offers, in research at Princeton University and teaching at Smith College. She chose Smith and discovered that she loved teaching, delighting in finding ways to make concepts clear to students.

“I was earnest about trying to get what I knew across to the students in a way that they could grasp onto it,” Wagley said in the “Infinite History” interview.

Her interest in education also led her to teaching positions at Johns Hopkins University and Goucher College. Then, in 1966, she became head of St. Paul’s School for Girls, experimenting with a variety of new math courses and helping the school develop a reputation for strong math and science preparation.

In 1970, around the time that MIT started making some of the boys’ dorms co-ed, Wagley became the first female member of the MIT Corporation. Once referring to the group as “formidable,” she nonetheless managed to serve on visiting committees ranging from chemistry to biology, philosophy, libraries, nuclear engineering, psychology, sponsored research, and the humanities. She also participated on the search committees that selected two of MIT presidents, Paul Gray and Charles Vest.

“I’ve tried to do a good job,” said Wagley, “thinking that that paved the way for women who came after me.”

It was MIT’s athletics, which had been completely unavailable to her as one of the first women at the Institute, that became a particular focus for Wagley as a Corporation member. She was instrumental in getting the Zesiger Sports and Fitness Center built, and she later established a Mary Frances Wagley Fund, an endowment supporting the head coach position for varsity men and women’s swimming and diving.

Wagley was working as the executive director of Episcopal Social Ministries of the Diocese of Maryland, where she ran a food bank and a homeless shelter, when she became the president of the MIT Alumni Association in 1984. Again, it was a first for women.

“As the first female president, obviously my topic was women at MIT,” Wagley told “Infinite History.”

“My mom loved MIT, she loved her time there,” says Jay Wagley. “MIT was a good fit for her, and since she loved it there, she wanted to give back to the Institute.”

Donations in Wagley’s memory can be made to St. Paul’s School for Girls in Brooklandville, Maryland, or Immanuel Episcopal Church in Sparks Glencoe, Maryland. The Wagley family plans to hold a virtual service in the coming weeks. For information on the memorial service, please email mfpwservice@gmail.com.

Exploring the lives of MIT pioneers through drama

What specific qualities should we be looking for in MIT's 16th president?

By combining chemotherapy, tumor injury, and immunotherapy, researchers show that the immune system can be re-engaged to destroy tumors in mice.

A new book from the MIT Future Heritage Lab goes inside a Syrian refugee camp to uncover the creative lives of its inhabitants.