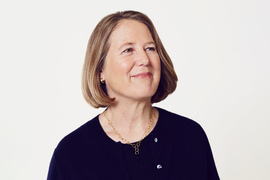 The MIT Corporation, which is the Institute’s board of trustees, has elected Diane B. Greene SM ’78  to serve as chair of the Corporation, effective Oct. 2.

Greene, the first woman to chair the Corporation, succeeds Robert B. Millard ’73, who served in the role since 2014. Once the transition occurs in October, Millard will return to his role as a Life Member of the Corporation.

“It is a great honor to be elected to lead the accomplished members of the Corporation, and to work with President Reif in supporting MIT’s extraordinary faculty and students,” Greene said.

“At MIT, students learn to connect mind, hand, and heart as part of a rigorous, experiential education,” she added. “At this moment in history, when multiple global crises have taken on existential proportions, it is more imperative than ever that the members of the MIT community have the resources and opportunities necessary to realize their visions, and to harness science and technology to serve our human family and our planet.”

“For higher education, the next few years present an extraordinary array of serious and unpredictable challenges, including public health risks, climate change, economic volatility, new questions about the nature of residential education and a historic societal reckoning on racial equity and justice,” said MIT President Rafael Reif. “To steer MIT through these rough waters will take steadiness and nimbleness, scope and sensitivity, broad vision and an unerring feel for our community’s core values. Given her career as a technologist, an entrepreneur, an executive, and an investor, and the depth and breadth of her service to MIT as a proud alum, Diane Greene represents an outstanding choice to chair the Corporation now.”

Thanking Millard for his service as Corporation chair, Reif added: “Bob’s tremendous passion, dedication, and obvious love for MIT make him a tremendous advocate for our community. With his natural skill as a fundraiser, he led the way in securing support for critical projects and in building momentum for the Campaign for a Better World. From Bob’s earliest days leading the Corporation, he brought an invigorating energy to the role that inspired us all, and we are deeply grateful for his service.”

“I am very pleased to be handing the gavel over to my longtime friend and colleague Diane Greene,” Millard said. “MIT is fortunate to have such an ideal person to continue the great work of this Institute. I very much look forward to her leadership and partnership.”

At MIT Greene has also been a member of the Deshpande Center Advisory Committee (from 2008 to 2011), a student externship sponsor (from 2014 to 2016), and a speaker at several MIT seminars and conferences, including the School of Engineering Distinguished Lecture in 2012.

Of her own days as an MIT student, Greene called it “a formative experience.”

“MIT has long worked for the betterment of our world,” she said. “The Institute has always dreamed big, and has time and again made what could once only be imagined, real. I look forward to joining with the Corporation to continue, and to build upon, MIT’s remarkable legacy.”

Greene earned a bachelor’s degree in mechanical engineering from the University of Vermont in 1976 and a master’s degree in naval architecture from MIT in 1978. An avid sailor, she was the 1976 women’s U.S. national dinghy sailing champion, and she holds a current sailing card at the MIT Sailing Pavilion.

After beginning her career as a naval architect designing ships, large ocean structures, and also windsurfers, Greene changed directions, receiving a master’s degree in computer science from the University of California at Berkeley in 1988. She then worked as an executive, entrepreneur, and investor in the technology industry for 35 years, holding engineering and management positions at SGI, Tandem, and Sybase.

She co-founded and was CEO of the video streaming software company VXtreme, which was sold to Microsoft in 1995. In 1998, she co-founded VMware, a company providing cloud computing and virtualization software and services, and served as president and CEO for the company’s first 10 years. After VMware was acquired by EMC in 2004, Greene remained CEO and took the company public in 2007.

In 2012, she co-founded and led Bebop Technologies, a software development platform that was acquired by Google’s parent company, Alphabet, in 2015. That year, she became senior vice president for Google’s cloud businesses, next becoming CEO of Google Cloud. Greene stepped down from this position in January 2019.

Greene has served on the boards of Intuit, Stripe, the AP Moller/Maersk Holding company, Wix, SAP, and Alphabet. In the nonprofit arena, she is director emerita of Khan Academy and has been a board member of Peninsula Open Space Trust and the California Academy of Science. She is a member of the National Academy of Engineering.

A native of Annapolis, Maryland, Greene is married to Mendel Rosenblum, a professor of computer science at Stanford University. They have two children.