How MIT built its own Covid-19 testing trailer

Designed and assembled by experts from across the Institute, the facility should enable testing of up to 1,500 people a day.
Jennifer Chu | MIT News Office
Publication Date:
Press Inquiries 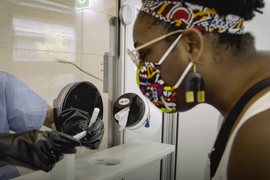 ↓ Download Image
Caption: A team of engineers, architects, medical workers, and facilities experts has built a 60-foot trailer that is now operating as the main test site for asymptomatic members of the MIT community who need to return to campus. “It’s really an example of MIT at its best — innovation from the ground up,” says MIT Medical chief of staff Brian Schuetz. In this photo, a person visits the MIT Medical trailer.
Credits: Image: Melanie Gonick, MIT

Caption:
A team of engineers, architects, medical workers, and facilities experts has built a 60-foot trailer that is now operating as the main test site for asymptomatic members of the MIT community who need to return to campus. “It’s really an example of MIT at its best — innovation from the ground up,” says MIT Medical chief of staff Brian Schuetz. In this photo, a person visits the MIT Medical trailer.
Credits:
Image: Melanie Gonick, MIT

In mid-March, in response to the unfolding Covid-19 pandemic, MIT Medical quickly set up testing tents where essential workers and others who remained on campus could be safely screened for the novel coronavirus. In the tents, nurses and physicians administered nasal swabs while dressed in full personal protective equipment, or PPE.

It soon became clear that to safely test on a daily basis, medical workers needed to regularly replenish their PPE — a resource in short, desperate supply. There was also the possibility that, in doffing all that PPE at the end of an eight-hour shift, a nurse could risk inhaling any infectious particles that might cling to gowns, surgical masks, and face shields.

“One of the biggest challenges in Covid testing is [that] you place the one doing the testing at a not-insignificant risk,” says Brian Schuetz, MIT Medical’s chief of staff.

Weather conditions were also a challenge, as a late-March noreaster threatened to upend the tents. Looking to the hot summer months, Schuetz and his medical team knew that major adjustments would have to be made to improve the safety and comfort of both patients and staff.

“We made a decision early on that we had to think differently about how we did things,” Schuetz says.

Over two months, he and experts from across campus worked tirelessly to design and build MIT’s newest testing facility — a 60-foot trailer that is now operating as the main test site for asymptomatic members of the MIT community who need to return to campus.

Inside, the renovated trailer accommodates a check-in station and six testing bays. Floor-to-ceiling plastic partitions run the length of the trailer, keeping medical staff on one side, and those getting tested on the other. In each testing bay, a tester on one side of the partition can fit her arms into large rubber gloves that extend out to the other side, so that she can perform a nasal swab without either party coming in physical contact.

The trailer is also equipped with an upgraded HVAC system, calibrated so that the air on either side of the partitions will not mix. The two separate spaces within the trailer make it possible for medical staff to safely test people while wearing a simple surgical mask, rather than full PPE.

“The result is: The folks behind that plastic are very safe,” Schuetz says. “If we can make our team comfortable and patients comfortable, we can help everyone be safer.”

The trailer began operating in early July, with the capacity to test up to 1,500 people per day. MIT’s Information Systems and Technology group wired the trailer to MIT’s Covid Pass system, which allows an MIT member to access campus facilities if they have tested negative for the coronavirus. The trailer is designated as a testing site for asymptomatic members with access to the Covid Pass app.

The entire experience takes about two minutes. The nasal swabs are analyzed at the Broad Institute of MIT and Harvard, and results are entered into the Covid Pass system; those who have been tested can check their results via the app.

“One of the biggest challenges in this whole effort was figuring out how to get all these disparate pieces put together, and I think we’ve created a solution that works together to help the campus be safe,” Schuetz says. “It’s really an example of MIT at its best — innovation from the ground up.”

A race against time

That ground-up effort took off quickly, when Schuetz first approached Elazer Edelman, director of the Institute for Medical Engineering and Science, looking for additional sources of PPE for the medical tents that were used initially.

“And Elazer said, ‘Wait a minute — MIT is the best place in the world to find people that can make exactly what we want,” recalls Martin Culpepper, professor of mechanical engineering and a member of MIT’s governance team on manufacturing opportunities for Covid-19.

So the medical team refocused their vision to test the MIT community, not in tents with medical staff in full PPE, but in a well-ventilated, weather-protected space.

Edelman connected with Culpepper, who reached out to campus workshops for material resources and expertise. Meanwhile, Schuetz worked with the Department of Facilities to acquire two trailers.

“We order trailers for construction projects all the time, and it’s nothing out of the norm, except now we’re in the middle of a pandemic, and there are not a lot of trailers out there,” recalls Paul Murphy, director of special projects in the Facilities Campus Construction team. “But everyone stepped up and knew how important this was, and within four days, we had two trailers, which normally could take months with this type of fit-out.”

“The early stages were all about napkin sketches, cardboard, duct tape, and bubblegum — whatever it takes to help you wrap your mind around this thing quickly,” Smith says.

O’Brien built a rough model of a testing bay and invited several nurses and physicians to test it out.

“Having experience building custom furniture, I thought there might be needs they will find that they have, that they weren’t going to think of ahead of time,” O’Brien recalls. “I realized that, for example, based on the wide range of height and shoulder width of testers, that existing designs found online at the time might not be comfortable for everyone.”

So she made a crucial adjustment to the final design, building the gloves into an extra panel in each bay’s window that can be adjusted up and down to accommodate a tester’s height. The team then worked with Culpepper to acquire materials for the actual build.

“At that time, the whole world was realizing they needed to source clear-sheet plastic to shield people interacting with one another, like cashiers and students, so there was a big scramble,” O’Brien says. “We were racing against time, and had to get this thing up and running as fast as possible, to manage a larger MIT population as soon as they started returning to campus.”

While she and Smith started building out the trailer’s physical layout with the help of campus construction crews, Culpepper worked with Facilities engineers to optimize the trailer’s HVAC system.

“We ran all sorts of calculations on how much air had to be turned over at a certain time, with the number of individuals who would occupy both sides of the trailer,” Murphy says.

The team designed a positive pressure HVAC system that pumps 700 cubic feet per minute of outdoor air through one side of the trailer’s plastic partition, in a way that keeps one side at positive pressure, and the other at negative pressure — a balance that prevents air on either side from mixing. A large, custom-built exhaust stack blows the air out about 12 feet above the trailer.

So far, about 4,000 people have been tested in the trailer. The eventual goal is to have all members of the community working and living on campus be tested up to twice a week, with the trailer as a key component of that stategy. Schuetz notes, however, that the evolution of testing technologies, medical guidance, and prevalence of Covid-19 in the broader Massachusetts community will likely result in changes to the testing strategy over the coming months.

Looking to a hopeful future, Schuetz suggests the trailer can be configured for other purposes, such as testing people for antibodies, or even, administering a vaccine.

“It’s not over now that it’s built,” adds O’Brien, who with Smith, is assembling a packet of sharable specs for anyone interested in building similar facilities. “It continues to be a versatile design, and we are still here on campus if needed, to update it.”

Taking an MIT approach to a return to campus