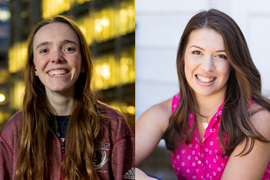 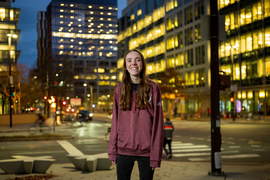 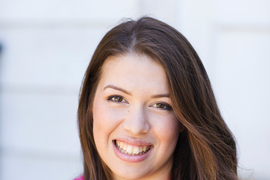 Katherine “Katie” Collins and Marla Evelyn Odell have been awarded Marshall Scholarships and will begin graduate studies in the United Kingdom. next fall. The MIT seniors were selected through a rigorous national process that evaluates applicants on the basis of academic merit, leadership, and ambassadorial potential.

Funded by the British government, the Marshall Scholarship provides exceptional American students with the opportunity to pursue two years of advanced study in any field at any university in the U.K. Up to 50 Marshall Scholars are selected each year from a pool of over 1,000 applicants.

MIT’s endorsed Marshall candidates were advised and supported by the distinguished fellowships team, led by Assistant Dean Kim Benard in Career Advising and Professional Development. They were also mentored by the MIT Presidential Committee on Distinguished Fellowships, co-chaired by professors Will Broadhead and Tamar Schapiro.

“We are very proud of all the MIT students who applied for the Marshall Scholarship this year. The combination of intellectual excellence, civic-mindedness, and good humor they embody is a reminder of how lucky we are to work with such extraordinary students,” Broadhead says. “Katie and Marla have been a source of inspiration for all of us on the committee and could not be more richly deserving of their places among this year’s cohort of scholars. We offer them our warmest congratulations!”

Hailing from Newton, Massachusetts, Collins is majoring in brain and cognitive sciences (BCS) with minors in computer science and biomedical engineering. For her first year as a Marshall Scholar, she will complete an MPhil in machine learning and machine intelligence at Cambridge University, followed by an MS in mind, language, and embedded cognition at the University of Edinburgh in her second year. Collins aspires to a future career as a professor, leading a lab at the intersection of artificial intelligence and cognitive science. She plans to continue spearheading efforts to bring more women and young girls into computer science.

Collins was named a Goldwater Scholar and a Johnson and Johnson Research Scholar, and has won awards for academic achievement from the BCS department. She has been working on several projects at the cusp of cognitive sciences, computation, and biomedicine. With Professor Josh Tenenbaum at the MIT Computational Cognitive Science group, Collins is building computational models to reverse-engineer how humans make inferences about their environment. She has also co-developed deep learning frameworks for the design of medical diagnostics with Professor Tim Lu of the MIT Synthetic Biology Center and in her internships at the Wyss Institute for Biologically Inspired Design and the Broad Institute of MIT and Harvard.

Collins has competed nationally as a member of the MIT varsity women’s cross country and track and field teams, earning NCAA All-American and Academic All-American recognition. She is the founder and co-president of MITxHarvard Women in Artificial Intelligence and a research editor at the MIT Undergraduate Research Journal. She also serves on the Dean’s Action Group on Social and Ethical Computing, and the MIT Undergraduate Innovation Committee.

Odell, from Edmonds, Washington, is majoring in computer science, economics, and data science, and minoring in mathematics and public policy. For her Marshall degree programs, she will pursue a MASt in mathematical statistics at Cambridge University and then an MS in the social science of the internet at Oxford University. Following her Marshall fellowship, she intends to undertake a career advocating for policies that encourage the development of more inclusive and transparent technologies.

As a research intern at the Brookings Institution, Odell shaped recommendations for federal privacy legislation. In the MIT Computer Science and Artificial Intelligence Laboratory, Odell researched explainable algorithms that can increase the accountability of black-box AI systems. With a passion for bridging policy and engineering, she helped organize the MIT Artificial Intelligence Ethics Reading Group and establish the MIT Science Policy Review.

Throughout her time at MIT, Odell has been a champion of inclusion. As a first-year student, Odell founded MIT Women in Electrical Engineering and Computer Science to provide professional, social, and mentorship opportunities for undergraduate women. Later, she helped write the Department of Electrical Engineering and Computer Science (EECS)’s statement on diversity and inclusion. She currently serves as the inaugural undergraduate representative on the EECS Committee for Diversity, Equity, and Inclusion.

As a lifelong student-athlete, Odell rowed for MIT's Division I crew team and served as a managing director for Amphibious Achievement, a dual rowing-academic mentorship program for high school students. Previously, she was president of MIT's computer science honor society, a Gordon-MIT Engineering Leader, and an Addir Interfaith Fellow.