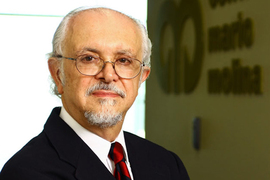 Renowned atmospheric chemist and MIT Institute Professor Emeritus Mario Molina, who discovered that chlorofluorocarbons (CFCs) had the potential to destroy the ozone layer in the Earth’s stratosphere, has died at the age of 77.

In the early 1970s, Molina demonstrated through computer modeling and laboratory work that compounds widely used in propellants and refrigerants could destroy ozone in the upper atmosphere, increasing the ultraviolet radiation reaching Earth. His theories were later confirmed by observation and helped support the ratification of the Montreal Protocol, the first global treaty to reduce CFC emissions.

In 1995, he shared the Nobel Prize in Chemistry with F. Sherwood Rowland of the University of California at Irvine, and Paul Crutzen, a scientist at the Max Planck Institute for Chemistry in Mainz, Germany, for discovering the depletion of the Earth’s thin, protective layer of ozone, which the Nobel committee referred to as the “Achilles heel of the universe.” Molina continued to advocate for environmental causes throughout his career.

“Mario Molina was the gentle giant of his age in environmental science, a wise mentor to his students, and respectful of others no matter their rank or status,” says Ronald Prinn, the TEPCO Professor of Atmospheric Science in EAPS, who led the search committee that originally brought Molina to MIT. “We are privileged to have had him on the faculty at MIT for 15 years, during the middle of which he was awarded the Nobel Prize, and from the proceeds of which he established the Molina Fellowships at MIT. His work on mitigating depletion of the ozone layer and air pollution in megacities is legendary. Most recently he founded the Centro Mario Molina devoted to the transition from fossil energy to clean energy in Mexico and beyond. He will be sorely missed, but never forgotten.”

Born on March 19, 1943 in Mexico City, Molina was enthralled by science from a young age. He used toy microscopes and chemistry sets to create his own “lab” in the bathroom of his childhood home. His aunt, a chemist, supported these early scientific interests by helping him conduct experiments more advanced than amateur chemistry sets would allow.

He attended school in Mexico City; later, his parents sent him abroad to the Institute Rosenberg in Switzerland, hoping to support his scientific proclivity. Molina attended the Universidad Nacional Autónoma de México (UNAM), where he completed his bachelor’s degree in chemical engineering in 1965, followed by a postgraduate degree in polymerization kinetics from the Albert Ludwig University of Freiburg, West Germany, in 1967. The University of California at Berkeley awarded him a PhD in physical chemistry in 1972.

In 1973, Molina began his CFC research as a postdoc at the University of California at Irvine, in the lab of F. Sherwood Rowland, who initially presented Molina with a list of research options. Molina latched quickly to one in particular: tracking the environmental fate of CFCs, the industrial chemicals that had been building up in the atmosphere and at the time were thought to have no adverse effects on the environment.

After simulating the chemicals’ reaction behavior and kinetics, Molina found that there was not much that could break down CFCs in the lower atmosphere. He suspected, however, that CFCs could be detrimental at higher altitudes, and hypothesized that high-energy photons from the sun available within the stratosphere could break the chemicals apart, generating free chlorine ions that would then react destructively with ozone molecules. Rowland and Molina published their work in the journal Nature in 1974.

That year, Molina and Rowland publicly called for a ban on CFCs at the American Chemical Society meeting. Molina also began teaching atmospheric science, holding positions at UC Irvine from 1975 to 1982 and conducting research at Caltech’s Jet Propulsion Laboratory from 1982 to 1989. Initially disputed by industry, Molina’s work began to gain traction, first when it was reviewed by the National Academy of Sciences in 1976, and then even more so when a hole in the Antarctic ozone later was first reported in 1985.

In 1987, his work, in part, inspired atmospheric chemist Susan Solomon to lead a scientific expedition to Antarctica, the results of which proved that the ozone hole was indeed caused by CFCs. The Montreal Protocol to phase out CFCs went into effect in 1989, the same year that Molina joined the faculty at MIT.

Molina was awarded the 1995 Nobel Prize in Chemistry with his colleagues for their work on CFCs and ozone depletion — the first time the Swedish Academy recognized environmental degradation from human-made substances. Molina donated a substantial portion of his share of the prize money to MIT in 1996 to create a fellowship program for scientists from developing countries to pursue environmental research.

“It’s clear to me that one of the important needs for global environment issues is the participation of scientists from all over the world,” Molina said in announcing the gift. “We have some very big challenges ahead if we are to preserve the environment, and it's obvious that there are too few scientists from developing countries involved in the effort.”

“The signature feature of Mario Molina was that he was not only a great scientist and scholar, he was also a true gentlemen — always ready with a smile and focused on the person he was speaking with, whether it was an undergraduate student or a fellow Nobel laureate,” says Solomon, who is the Lee and Geraldine Martin Professor of Environmental Studies in EAPS and holds a secondary appointment in the Department of Chemistry.

“His humanity and his science”

MIT appointed him an Institute Professor for his abilities as a “natural educator” and excellence in research in 1997.

Molina often traveled to Mexico to work on environmental projects. While at MIT, he collaborated with policymakers and researchers to reduce Mexico City’s severe air pollution and improve air quality. In 2004, he founded the Mario Molina Center for Strategic Studies in Energy and the Environment in Mexico City, an organization dedicated to bridging “practical solutions between science and public policy on energy and environment matters to promote sustainable development and vigorous economic growth.” That same year, he left MIT to join the Scripps Institution of Oceanography and the Department of Chemistry and Biochemistry at University of California at San Diego. In 2017, he was inducted into the California Hall of Fame.

“Mario Molina is unique in his ability to span from fundamental science to local and global policy for stewarding our environment. He towers in his humanity as well as his science,” said MIT President Charles M. Vest on Molina’s departure.

Molina was awarded numerous honorary degrees from institutions including Harvard University, Duke University, and Yale University, as well as institutions in Mexico. He was elected to the National Academy of Sciences in 1993, the United States Institute of Medicine in 1996, and The National College of Mexico in 2003. He was a member of the Mexican Academy of Sciences and a fellow of the American Association for the Advancement of Science (AAAS), and served on numerous advisory councils, including the National Science Foundation’s Advisory Committee for Geosciences.

In addition to his Nobel Prize, Molina received the Tyler Prize for Environmental Achievement, the UNEP-Sasakawa Environment Prize, and the United Nations Champion of the Earth Award. He was bestowed the Knight Medal of the Legion of Honor by French President Francois Hollande in 2014. He was awarded the Esselen Award of the Northeast section of the American Chemical Society in 1987, the Newcomb-Cleveland Prize from AAAS in 1988, as well as the NASA Medal for Exceptional Scientific Advancement and the United Nations Environmental Programme Global 500 Award in 1989.

Additionally, the Pew Charitable Trusts Scholars Program in Conservation and the Environment honored him as a leading environmental scientist in 1990. Molina was given the Golden Plate Award of the American Academy of Achievement in 1996. He won the Willard Gibbs Award from the Chicago Section of the American Chemical Society and the American Chemical Society Prize for Creative Advances in Environment Technology and Science in 1998. He was granted the 9th Annual Heinz Award in the Environment. He also had an asteroid named after him: 9680 Molina.