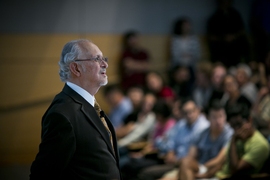 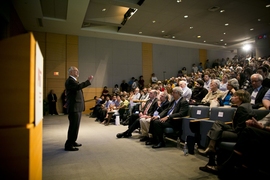 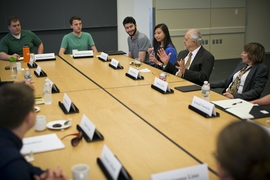 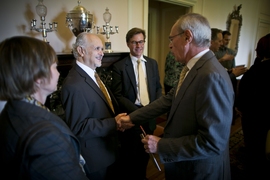 Caption:
Molina meets with student leaders to discuss issues relating to his lecture on climate change.

Noted atmospheric chemist and Nobel laureate Mario J. Molina called for rational thinking about climate science and the risks of global climate change, as well as better communication about what experts know, in Monday’s Compton Lecture at MIT.

“We have a responsibility toward future generations,” Molina told a standing-room-only audience in Wong Auditorium. “We need to leave them … an environment where they can have a standard of living at least as good as the one we have now.”

Molina, a professor of chemistry and biochemistry at the University of California at San Diego, sought to debunk three common myths about climate change. Drawing on his decades of work in climate science — including 14 years on the MIT faculty — he also commented on possible strategies for climate action, while sounding the alarm that continuing business as usual is likely to lead to a climate catastrophe.

The science is solid

“Really, the majority of experts agree that climate change is not only happening, but is a consequence of human activities,” Molina said, debunking the myth that the science behind climate change is not well established. While acknowledging that a “very few” scientists hold a different view, he noted that such scientists’ arguments have not, as some climate-change skeptics have charged, been ignored by the rest of the community; rather, he said, these outlier views haven’t held up to scientific scrutiny.

Molina went on to charge the news media with misrepresenting the broad agreement among climate scientists. “What I’m calling a fact of the consensus of the scientific community is not well-represented in the media,” he said. “We know that this is the result of a very well-financed public relations campaign; it was done on purpose by interest groups. … The consequence is, of course, the public perception is biased because of coverage in the media.”

Despite this, Molina noted that Americans are beginning to accept global climate change in larger numbers, but cautioned that many still think humans have nothing to do with the changes. In one study, for example, two-thirds of randomly sampled participants agreed that the Earth is warming, but less than half believed the warming is connected with human activity.

To support his assertion that climate science is well established, Molina provided an overview dating back to Joseph Fourier, a 19th-century mathematician who pondered global temperature. He also mentioned chemist Svante Arrhenius, who predicted in the late 1800s that atmospheric carbon dioxide would increase because of human activities, and that this would affect the climate. Molina went on to cite work by physicists Albert Einstein and Max Planck, whose revolutionary equations led directly to a new understanding of energy radiation and temperature — and, ultimately, to our understanding of the greenhouse effect.

Molina has been a major contributor to our knowledge of human effects on the environment: In a 1974 paper, he and a colleague predicted that the emission of industrial gases known as chlorofluorocarbons (CFCs) would cause damage to the Earth’s protective ozone layer. This work led to a share of the Nobel Prize in chemistry in 1995, and also to the Montreal Protocol regulating the emission of CFCs.

Too late to address the problem?

In addressing a second climate-change myth — that even if climate change is real, and human-caused, we still have plenty of time to take action — Molina stressed that “things are already happening”: Floods, droughts, and other extreme weather events are taking place much more frequently than in the past.

“Until a few years ago the scientific community was very conservative, saying we don’t have enough evidence. But that has changed in recent years,” Molina said. “You don’t claim that an event such as Hurricane Sandy was caused by climate change … [but] the intensity is likely to have increased because of climate change, because of human activities.”

Perhaps Molina’s most pressing concern — and the third myth he aimed to debunk — was that it might be too late to do anything about climate change. He pointed to a nonbinding 2009 accord in which heads of state agreed that “it would be good to attempt to hold the global temperature [increase] to less than 2 degrees [Celsius].” To do this, he said, global greenhouse gas emissions would have to drop by nearly half of present-day levels.

“It can be done, but there is no magic bullet — you have to do many things at the same time,” Molina said, adding: “Economists are beginning to agree that the cost is not very large, surprisingly.” He noted promising recent advances at MIT and elsewhere in wind, solar, and even nuclear energy — “a relatively safe way of generating energy, if you do it correctly,” he said.

Molina stressed that climate action won’t begin in earnest until the public has a better understanding of the magnitude of the risk associated with not doing anything.

“In order for society to make a decision how to tackle this problem, you don’t look at the most likely event. You look at probabilities that something really unacceptable would take place,” Molina said. “If I have a probability of 1 in 10, even 1 in 100 but I have a very bad outcome, I just don’t want to gamble.”

In closing, Molina argued that a major barrier to addressing climate change is Congress. “They don’t quite believe the things we are talking about,” Molina said of climate-change deniers, adding that he is working with economists to try to help these officials better understand the risks and potential dangers to the business-as-usual approach.

Throughout his talk, Molina also mentioned individual researchers and initiatives at MIT that give him hope for the future. “It can be done,” he concluded. “I’m hopeful if we bring rationality, we might be able to do it.”