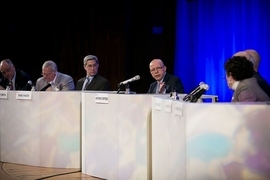 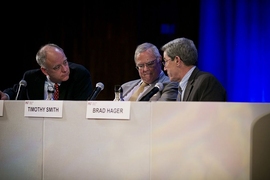 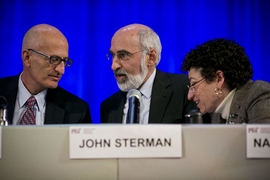 ↓ Download Image
Caption: The pro-divestment case was made by (from left) Don Gould of Gould Asset Management; John Sterman, professor at MIT's Sloan School of Management; and Naomi Oreskes, professor of the history of science at Harvard University.
Credits: Photo: Dominick Reuter 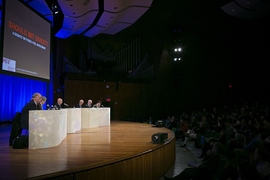 ↓ Download Image
Caption: The debate on fossil fuel divestment, held in MIT's Kresge Auditorium, was part of a series of events in the Institute's Conversation on Climate Change.
Credits: Photo: Dominick Reuter

Caption:
The anti-divestment team, conferring on their response to a question, consisted of (from left) Frank Wolak, professor of economics at Stanford University; Timothy Smith of Walden Asset Management; and Brad Hager, director of the MIT Earth Resources Laboratory.
Credits:
Photo: Dominick Reuter

Caption:
The pro-divestment case was made by (from left) Don Gould of Gould Asset Management; John Sterman, professor at MIT's Sloan School of Management; and Naomi Oreskes, professor of the history of science at Harvard University.
Credits:
Photo: Dominick Reuter

Caption:
The debate on fossil fuel divestment, held in MIT's Kresge Auditorium, was part of a series of events in the Institute's Conversation on Climate Change.
Credits:
Photo: Dominick Reuter

On Thursday, MIT held an event that Maria Zuber, vice president for research, described in welcoming remarks as likely “a first-of-its-kind occurrence: a serious, campus-wide debate on the pros and cons of fossil-fuel divestment, sponsored by the university senior administration that is being petitioned.”

The debate, held in Kresge Auditorium before hundreds of attendees from MIT and elsewhere, featured two teams of experts, in a classical debate format, who addressed the contentious issue of whether MIT should shed its investments in fossil-fuel companies. It was moderated by Tony Cortese of the Intentional Endowments Network, a group that helps universities align their investments with their values and goals.

“This is not a popularity contest; we’re not counting votes; there’s no applause meter,” Zuber said. “We’re not declaring winners and losers. We are here to learn and to understand both sides of a complex question.”

The two teams — each consisting of an MIT faculty member, a professor from another institution, and an executive from an investment firm — quickly found common ground on several major points. All six participants agreed on the seriousness of climate change, and the need for strong actions to curb greenhouse-gas emissions; they also agreed that one of the most important policy measures to address the issue would be the imposition of a price on the use of fossil fuels, such as a carbon tax. But they differed on whether an MIT divestment from fossil-fuel companies would help address climate change in any meaningful way.

John Sterman, the Jay W. Forrester Professor in Computer Studies at the MIT Sloan School of Management, said in an opening statement for the pro-divestment side that an MIT divestment is “not only right, it is vital to support the policies that are needed to prevent potentially catastrophic climate change. Further, divestment is necessary to preserving the integrity of MIT and our commitment to the scientific method.”

“The stakes are immense,” Sterman said, citing overwhelming evidence that if present trends in the use of fossil fuels continue unabated, “the result would be nothing short of a holocaust.”

MIT “must take a stand,” Sterman said, adding that fossil-fuel companies “continue to fund deniers, undermine the science, confuse the public, and delay action — actions antithetical to the values of MIT. The integrity of the Institute is at stake. … We cannot say that we care about climate change while we invest in an industry that threatens our prosperity, our health, and our lives.”

Responding for the anti-divestment team, Timothy Smith, director of shareholder engagement at the investment firm Walden Asset Management, said that while he agrees with Sterman’s assessment of threat that climate change poses, “I don’t think that automatically leads to only one conclusion — the sale of stock being the approach that you must take.” And Frank Wolak, a professor of economics at Stanford University, added that there’s a reason fossil-fuel companies produce coal and oil: “It’s because we demand them, to heat our homes, to drive our cars, to fly in our airplanes.”

“Divestiture does nothing to address that problem,” Wolak said. “As long as demand is still there for the fossil fuels, the greenhouse-gas emissions will exist, regardless of who owns the assets.”

“We all could agree that divestiture is a symbolic gesture that, sadly, will have no measurable impact on global greenhouse gas emissions, or the behavior of companies that produce fossil fuels,” Wolak added. He pointed out that the global capitalization of the fossil-fuel industry amounts to $60 trillion; MIT’s entire endowment of $12.4 billion represents just 0.02 percent of that, and even the endowments of all U.S. universities combined are less than 1 percent of that figure. The only real effect of divestiture, Wolak said, would be that “different people would be earning the profits.”

Rather than divesting, Wolak argued, MIT “can do much more to actually address the global climate challenge.” Noting the widespread agreement that setting a price on carbon is the most effective approach to reducing greenhouse-gas emissions, he said that actually designing and implementing such a mechanism is a challenge worthy of MIT, and one that could be adopted and tested at a campus level to set an example.

Naomi Oreskes, a professor of the history of science at Harvard University, responded for the pro-divestment team that even if divestment is a symbolic action, “Symbols matter, because they signal our intent, and they invite other people to join in our intent.” She said that while all six panelists agree on the importance of carbon pricing, it’s a false dichotomy to suggest that the two actions are in opposition: Divestment, she said, can be part of a political strategy to build public pressure that could lead to a carbon tax.

Citing figures from the International Energy Agency indicating that construction of fossil-fuel infrastructure should cease by 2017 to avert a climate crisis, Orestes said, “We must stop investing in the industries that are driving us toward crisis.”

Brad Hager, the Cecil and Ida Green Professor in Earth and Planetary Sciences and director of MIT’s Earth Resources Laboratory, arguing against divestment, said that not all fossil fuels are alike, and not all companies in that sector are alike. For example, he said, natural gas is less environmentally damaging than coal, and the shale gas revolution has actually reduced the nation’s carbon footprint. “We need to apply some discrimination, and that’s what’s wrong with this divestment movement: It throws everything out rather than making thoughtful choices about what is good, and what we should keep and what we should get rid of,” Hager said.

Smith, the investment-firm executive who argued against divestment, suggested that stockholder involvement — exercising the rights to make shareholder resolutions and demands for changes from companies — could be more effective than divestment in compelling corporate change. This could be especially effective, he said, if MIT were to combine with other institutional investors to form a bloc to bring pressure on fossil-fuel companies, such as by urging them to invest more in renewable energy alternatives.

Don Gould, president and chief investment officer for Gould Asset Management, arguing in favor of divestment, agreed that shareholder engagement can be a useful mechanism. However, he added: “It’s questionable to expect a coal producer to stop producing coal because of shareholder engagement.”

Gould said that divestment is not really aimed at fossil-fuel companies themselves. “It’s aimed at the policymakers who have to formulate a policy that will provide for a habitable planet,” he said.

Gould is also a trustee of Pitzer College in California, which last year committed itself to — and achieved — full divestment from fossil fuels. Divestment, he said, “aligns an institution’s actions with its values. A university actively committed to engineering a sustainable future for humanity should not be betting its endowment dollars on the opposite outcome. It is a conflict of interest, plain and simple.”

Hager said that as a researcher who has worked with fossil-fuel companies, he has found that “their positions on global warming and the environment span a broad spectrum. Some have an irresponsible cowboy mentality, plundering and laying waste. … Others are much more invested in a sustainable future. For example, Shell leadership is actively promoting a price on carbon, preferring the stable environment that a carbon price would provide.”

Yesterday’s debate was the fourth in a series of open-forum spring events as part of the MIT Climate Change Conversation; next up is a six-date listening tour around campus. The Committee on the MIT Climate Change Conversation will incorporate feedback from these events into a final report to the MIT administration at the end of the academic year. The report will provide a short list of possible actions, in unranked order, with associated pros and cons, and will be released to the MIT community for comment. The report, along with all additional input, will collectively provide a sense of the community’s point of view to MIT’s senior leadership, and will inform its decision-making.

MIT hosted a debate between two panels of experts last week to discuss whether the Institute should divest its endowment from fossil-fuel companies, reports Kyle Alspach for BostInno. Each side included “an MIT faculty member, a professor from another institution and an executive from an investment firm.”

Jennifer Switzer reports for The Tech on MIT’s fossil-fuel divestment debate. “Divestment has been one of the most strongly debated potential actions of academic institutions in recent times,” said Prof. Roman Stocker, head of the MIT Climate Change Committee. “We decided: Why don’t we tackle it head-on?”

Benjamin Hulac reports for Scientific American on a debate held at MIT on whether the Institute should divest its endowment from fossil-fuel companies. The forum included a panel of experts arguing each side of the issue and responding to questions from the audience.

To divest, or not to divest?