To divest, or not to divest? 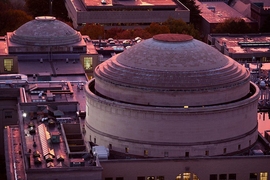 On Thursday, April 9, members of the MIT community will gather to hear arguments for and against the Institute divesting from the fossil-fuel industry.

The event — titled “Should MIT Divest? A Debate on Fossil Fuel Investment” — will be held from 4:30 to 6 p.m. in Kresge Auditorium, and will be webcast live. It is the fourth of a series of open-forum spring events that are part of the MIT Climate Change Conversation.

“Divestment has been one of the most strongly debated potential actions of academic institutions in recent times,” says Roman Stocker, an associate professor of civil and environmental engineering and chair of the Committee on the MIT Climate Change Conversation. “We decided: Why don’t we tackle it head-on? Why don’t we stage a debate, in the classical academic sense of the term, in which two teams explore all the possible arguments for and against divestment?”

Of Thursday’s event, Stocker adds, “We think this event will be intellectually exciting, morally engaging, and allow people to sample a spectrum of opinions at a very advanced level. More broadly, we see this as an opportunity to discuss how MIT can act to confront the most challenging problem of our time, climate change”.

The debaters in favor of fossil-fuel divestment will be John Sterman, the Jay W. Forrester Professor in Computer Studies at the MIT Sloan School of Management; Naomi Oreskes, a professor of the history of science at Harvard University; and Don Gould, a trustee of Pitzer College and president and chief investment officer of the wealth-management firm Gould Asset Management.

Debating against fossil-fuel divestment will be Brad Hager, the Cecil and Ida Green Professor in Earth and Planetary Sciences and director of the MIT Earth Resources Laboratory; Frank Wolak, a professor of economics at Stanford University; and Timothy Smith, a director at the investment-management firm Walden Asset Management.

The debate will be moderated by Tony Cortese of the Intentional Endowments Network, a group that helps universities align their investments with their values and goals.

After the moderator opens the event, each debater will make his or her arguments, and will have the opportunity to respond to their peers’ arguments with rebuttals or support. Finally, the debaters will address questions from the community, which can be submitted via email to climatechange@mit.edu before and during the debate.

The organizers emphasize that the event is meant to educate, not to polarize. “The real goal is not to pick a winner or loser by the end of the evening; the real goal is that people who come in with a certain view of the argument will walk out with a much more nuanced view and reasons why divestment could or could not be a good idea,” Stocker says.

“This event, as well as the others in this spring series, is meant to catalyze the conversation about what MIT can do to confront climate change,” Stocker says. “We invite everyone in the MIT community to contribute to the conversation by attending the events, and sharing ideas through the Idea Bank or, in person, at the listening tour we are about to launch. With multiple dates where the Committee will be available at different locations across campus in April and May, we hope to hear from many students, faculty, and staff.”

The committee will incorporate feedback from these events into its final report to the MIT administration at the end of the academic year. The report will provide a short list of possible actions, in unranked order, with associated pros and cons. The committee report will be released to the MIT community for comment. The report, along with all additional input, will collectively provide a sense of the community’s point of view to MIT’s senior leadership, and will inform decision-making.

“It is by listening to the largest fraction of our community that we can best determine what MIT as a community should do,” Stocker adds.