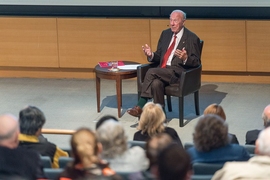 You might not picture former Secretary of State George Shultz PhD ’49 as someone who drives an electric car, or has solar panels on the roof of his home. But he does — and Shultz has become a vocal proponent of action to combat climate change.

Shultz brought that message to MIT in a talk on Tuesday afternoon, advocating further policy and research efforts to address the problem, and discussing ways to engage people who have not previously supported action on climate change.

“The climate is changing,” Shultz told an audience in MIT’s Wong Auditorium. Speaking of those who have resisted the scientific consensus on the matter, he added, “If you don’t like the science, use your eyes.”

Shultz’s preferred approach involves two main steps: a revenue-neutral carbon tax, and increased government funding of research on clean technologies. The carbon tax would apply to the sale of fossil fuels, which produce greenhouse gases that become trapped in the Earth’s atmosphere and raise temperatures; money raised by that tax would then be refunded to citizens — making the approach “revenue-neutral,” meaning the government would not take in added revenue.

Shultz suggested referring to such initiatives as an “insurance policy” in recruiting support among those reluctant to take climate action. These policies, Shultz emphasized, would not be costly, especially compared with the long-term expense of dealing with climate change.

“The insurance policy isn’t even that expensive,” Shultz asserted. When it comes to R&D funding, he said, “The amount of federal government dollars is trivial. It isn’t even a rounding error.”

Moreover, he added, “You get a multiple out of the federal effort”: Private-sector investors will want to join a growing area of technological innovation.

In particular, Shultz emphasized, better electricity storage, whether through batteries or other technologies, would be a highly significant development, allowing intermittent solar and wind energy to be used when the sun is not shining, or when there is no wind.

“One of the real breakthroughs is when someone figures out long-term storage capacity,” Shultz said.

He added that implementing policies can bring about subsequent cultural or social changes as well.

“Once you have something like this in [place], it has an effect on people’s attitudes,” Shultz said. He noted that the Canadian province of British Columbia implemented a carbon tax in 2008, and has subsequently seen sales of hybrid and electric vehicles rise, perhaps as a result.

“We shouldn’t be discouraged”

Shultz’s talk, titled, “How to Think about Energy and Climate,” was hosted by the MIT Energy Initiative, where Shultz serves on the external advisory board. Working to address climate change “is very much in the MIT tradition,” Shultz told the audience.

Shultz received his PhD in economics at MIT, and served on the economics faculty in the 1950s. From 1969 through 1974, he served as U.S. secretary of labor, director of the Office of Management and Budget, and secretary of the Treasury. Shultz served as secretary of state from 1982 to 1989, during which time he helped construct the last major international agreement on the atmosphere — the Montreal Protocol of 1987 phasing out chlorofluorocarbons, which deplete the ozone layer.

Then as now, Shultz recalled, some observers adopted a skeptical position about the scientific evidence. However, he noted, “In the case of the Montreal Protocol, the people who were worried [about the atmosphere] were right.”

Then-President Ronald Reagan also “thought we should take out an insurance policy,” Shultz said, and backed the treaty.

While a significant gulf exists between the nation’s two major political parties on the issue of climate policy, Shultz tried to persuade the audience that progress was still possible among congressional Republicans. “We have to think about how we approach people to find a common ground,” Shultz said, urging diplomacy toward those currently opposing action.

In 2009, the House of Representatives passed a bill that would have limited carbon emissions through a “cap-and-trade” system, but the measure died in the Senate. The Obama administration has since directed the Environmental Protection Agency to limit greenhouse gases, a directive the Supreme Court largely upheld this summer, but the EPA’s efforts are still in their early stages.

Shultz also recommended that the U.S. and China pursue a bilateral agreement regarding climate and technology items where they could find common ground, and then use that to get other countries to sign on for further climate action, rather than waiting for global acceptance of a climate accord.

Shultz has made climate change one of his major interests as a policy advocate. In a 2013 interview with Scientific American, he noted that he had solar panels installed on his house several years ago and now drives an electric car, saying, “I figure I've got to walk the talk.” The presence of his four great-grandchildren, Shultz noted in those remarks, has helped give him a sense of urgency about the matter.

As difficult as the issue might seem, Shultz told his MIT audience yesterday, there is some progress being made, and more is possible.

“We shouldn’t be discouraged and think that nothing is happening,” Shultz said.

Report: Unless we change direction, the world will warm 3-5 degrees Celsius