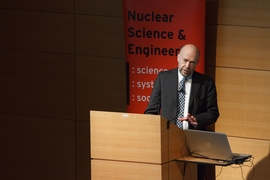 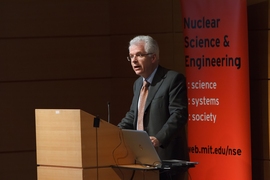 James Hansen, a former head of NASA’s Goddard Institute for Space Studies who was one of the first scientists to raise concerns about global climate change, spoke at MIT Tuesday in the biennial David J. Rose Lecture, sponsored by the Department of Nuclear Science and Engineering (NSE).

Richard Lester, the Japan Steel Industry Professor at MIT and department head of NSE, said in introductory remarks that Hansen “may well be the world’s best-known climate scientist.” Hansen came to prominence in the late 1980s, when he first testified before Congress about the perils of accumulating carbon dioxide in the atmosphere — testimony that “had a galvanizing effect,” Lester said.

“I think it’s really important that young people understand the situation that we older people are leaving them with,” said Hansen, currently an adjunct professor at Columbia University’s Earth Institute. “It’s going to be extraordinarily difficult to deal with … and I’ve become frustrated with governments that don’t recognize their responsibilities to future generations.”

He said that while it may not have been apparent during this year’s harsh winter in the Boston area, “the planet was actually extremely warm in January, February, and March” — in fact, he added, the readings for those months were the warmest for that season in recorded history. That wasn’t obvious locally, Hansen said, merely because, “We’re stuck in this pattern where the eastern part of North America has been extremely cold.”

That pattern, Hansen suggested, may be related to a cold patch in the North Atlantic, generated by increasing meltwater from Greenland, that may portend a slowdown of the present Atlantic circulation system. Overall, he said, 2014 was the warmest on record, and 2015 is on track to exceed it.

“We have an emergency,” Hansen said. He pointed out that there is a lag in the climate system, so the planet has not yet finished warming from the greenhouse gases that are already in the atmosphere. “And we’re adding more all the time,” he added.

What’s more, the response to this increase in greenhouse gases is likely to be extremely nonlinear, he said: “It just turns out that our climate system is dominated by amplifying feedbacks … so there’s a danger that the system is going to run out of control.”

“The things that we need to do actually make sense for other reasons,” Hansen stressed, “but they’re not being pursued, and frankly they’re not even being proposed by governments.”

Some effects of climate change, he said, are simply irreversible. For example, the Intergovernmental Panel on Climate Change has projected that 25 to 50 percent of all species on Earth could be extinct by 2100 if energy use continues on its current trajectory. The loss of ice sheets is essentially also irreversible, since it takes thousands of years for these sheets to accumulate.

While most policy recommendations have focused on trying to limit greenhouse gas emissions to a level that would produce warming of no more than 2 degrees Celsius, that is “actually a disaster scenario, in my opinion,” Hansen said: It would likely cause so much melting of ice sheets that the resulting sea-level rise would render most of the world’s coastal cities uninhabitable.

“We have to rebalance the planet’s energy balance,” Hansen said. Earlier calculations, he said, had indicated that would require a sustained reduction of 6 percent annually in global carbon emissions — a very difficult target to meet — but more recent measurements have shown that the planet is absorbing more carbon dioxide than scientists had expected, so the actual needed reduction may be less.

“The science is crystal clear,” Hansen said: We can’t afford to burn even the already known reserves of fossil fuel. And avoiding that, he said, will require a substantial increase in the use of nuclear power.

“We need to be realistic in looking at the available energy sources,” he said, pointing out that solar and wind energy still represent only about 3 percent of global energy supply.

“If we could decarbonize electricity, then we could solve the problem,” Hansen added: Even liquid fuels for transportation can be manufactured using alternative sources of electricity. Sweden, he noted, has already achieved essentially carbon-free electricity, thanks to a combination of nuclear power and abundant hydropower; France is nearing this goal, thanks mostly to its extensive use of nuclear power. Both countries, he said, produced most of their nuclear infrastructure within a decade, “so that has been the fastest way to decarbonize that has been demonstrated so far.”

Fossil fuels have been artificially cheap because their true costs to society, including pollution and climate change, have been ignored, Hansen said. To counter that, he added, what’s needed is “to put a rising fee, a tax, on carbon emissions,” which would be collected at the source, and then returned directly to the public.

“That would be a huge incentive for entrepreneurs to develop no-carbon and low-carbon energy and products,” Hansen said. And by returning the money to the people, he said, those who achieve the greatest reductions in carbon use would reap the greatest profit. Projections show that such an approach could reduce U.S. carbon emissions by more than half within 20 years — and create 3 million new jobs in the process.