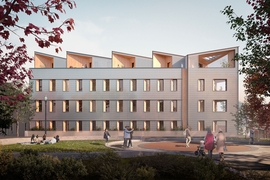 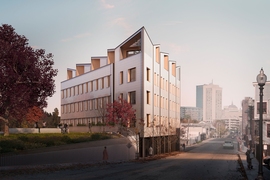 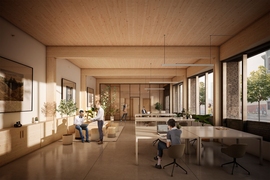 A new building about to take shape in Boston’s Roxbury area could, its designers hope, herald a new way of building residential structures in cities.

Designed by architects from MIT and the design and construction firm Placetailor, the five-story building’s structure will be made from cross-laminated timber (CLT), which eliminates most of the greenhouse-gas emissions associated with standard building materials. It will be assembled on site mostly from factory-built subunits, and it will be so energy-efficient that its net carbon emissions will be essentially zero.

Most attempts to quantify a building’s greenhouse gas contributions focus on the building’s operations, especially its heating and cooling systems. But the materials used in a building’s construction, especially steel and concrete, are also major sources of carbon emissions and need to be included in any realistic comparison of different types of construction.

Wood construction has tended to be limited to single-family houses or smaller apartment buildings with just a few units, narrowing the impact that it can have in urban areas. But recent developments — involving the production of large-scale wood components, known as mass timber; the use of techniques such as cross-laminated timber; and changes in U.S. building codes — now make it possible to extend wood’s reach into much larger buildings, potentially up to 18 stories high.

Several recent buildings in Europe have been pushing these limits, and now a few larger wooden buildings are beginning to take shape in the U.S. as well. The new project in Boston will be one of the largest such residential buildings in the U.S. to date, as well as one of the most innovative, thanks to its construction methods.

Described as a Passive House Demonstration Project, the Boston building will consist of 14 residential units of various sizes, along with a ground-floor co-working space for the community. The building was designed by Generate Architecture and Technologies, a startup company out of MIT and Harvard University, headed by John Klein, in partnership with Placetailor, a design, development, and construction company that has specialized in building net-zero-energy and carbon-neutral buildings for more than a decade in the Boston area.

Klein, who has been a principal investigator in MIT’s Department of Architecture and now serves as CEO of Generate, says that large buildings made from mass timber and assembled using the kit-of-parts approach he and his colleagues have been developing have a number of potential advantages over conventionally built structures of similar dimensions. For starters, even when factoring in the energy used in felling, transporting, assembling, and finishing the structural lumber pieces, the total carbon emissions produced would be less than half that of a comparable building made with conventional steel or concrete. Klein, along with collaborators from engineering firm BuroHappold Engineering and ecological market development firm Olifant, will be presenting a detailed analysis of these lifecycle emissions comparisons later this year at the annual Passive and Low Energy Architecture (PLEA) conference in A Coruña, Spain, whose theme this year is “planning post-carbon cities.”

For that study, Klein and his co-authors modeled nine different versions of an eight-story mass-timber building, along with one steel and one concrete version of the building, all with the same overall scale and specifications. Their analysis showed that materials for the steel-based building produced the most greenhouse emissions; the concrete version produced 8 percent less than that; and one version of the mass-timber building produced 53 percent less.

The first question people tend to ask about the idea of building tall structures out of wood is: What about fire? But Klein says this question has been thoroughly studied, and tests have shown that, in fact, a mass-timber building retains its structural strength longer than a comparable steel-framed building. That’s because the large timber elements, typically a foot thick or more, are made by gluing together several layers of conventional dimensioned lumber. These will char on the outside when exposed to fire, but the charred layer actually provides good insulation and protects the wood for an extended period. Steel buildings, by contrast, can collapse suddenly when the temperature of the fire approaches steel’s melting point and causes it to soften.

The kit-based approach that Generate and Placetailor have developed, which the team calls Model-C, means that in designing a new building, it’s possible to use a series of preconfigured modules, assembled in different ways, to create a wide variety of structures of different sizes and for different uses, much like assembling a toy structure out of LEGO blocks. These subunits can be built in factories in a standardized process and then trucked to the site and bolted together. This process can reduce the impact of weather by keeping much of the fabrication process indoors in a controlled environment, while minimizing the construction time on site and thus reducing the construction’s impact on the neighborhood.

Animation depicts the process of assembling the mass-timber building from a set of factory-built components. Courtesy of Generate Architecture and Technologies

“It’s a way to rapidly deploy these kinds of projects through a standardized system,” Klein says. “It’s a way to build rapidly in cities, using an aesthetic that embraces offsite industrial construction.”

Because the thick wood structural elements are naturally very good insulators, the Roxbury building’s energy needs for heating and cooling are reduced compared to conventional construction, Klein says. They also produce very good acoustic insulation for its occupants. In addition, the building is designed to have solar panels on its roof, which will help to offset the building’s energy use.

The team won a wood innovation grant in 2018 from the U.S. Forest Service, to develop a mass-timber based system for midscale housing developments. The new Boston building will be the first demonstration project for the system they developed.

“It’s really a system, not a one-off prototype,” Klein says. With the on-site assembly of factory-built modules, which includes fully assembled bathrooms with the plumbing in place, he says the basic structure of the building can be completed in only about one week per floor.

“We're all aware of the need for an immediate transition to a zero-carbon economy, and the building sector is a prime target,” says Andres Bernal SM ’13, Placetailor’s director of architecture. “As a company that has delivered only zero-carbon buildings for over a decade, we're very excited to be working with CLT/mass timber as an option for scaling up our approach and sharing the kit-of-parts and lessons learned with the rest of the Boston community.”

With U.S. building codes now allowing for mass timber buildings of up to 18 stories, Klein hopes that this building will mark the beginning of a new boom in wood-based or hybrid construction, which he says could help to provide a market for large-scale sustainable forestry, as well as for sustainable, net-zero energy housing.

“We see it as very competitive with concrete and steel for buildings of between eight and 12 stories,” he says. Such buildings, he adds, are likely to have great appeal, especially to younger generations, because “sustainability is very important to them. This provides solutions for developers, that have a real market differentiation.”

He adds that Boston has set a goal of building thousands of new units of housing, and also a goal of making the city carbon-neutral. “Here’s a solution that does both,” he says.

Taking the carbon out of construction with engineered wood