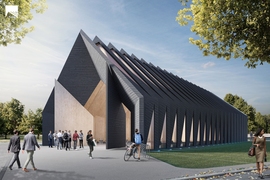 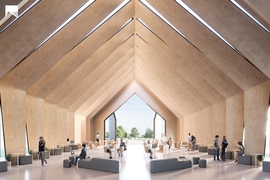 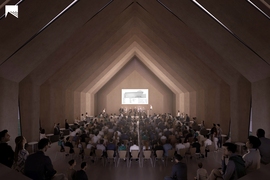 The construction and operation of all kinds of buildings uses vast amounts of energy and natural resources. Researchers around the world have therefore been seeking ways to make buildings more efficient and less dependent on emissions-intensive materials.

Now, a project developed through an MIT class has come up with a highly energy-efficient design for a large community building that uses one of the world’s oldest construction materials. For this structure, called “the Longhouse,” massive timbers made of conventional lumber would be laminated together like a kind of supersized plywood.

The design will be presented this October at the Maine Mass Timber Conference, which is dedicated to exploring new uses of this material, which can be used to build safe, sound high-rise buildings, if building codes permit them.

John Klein, a research scientist in MIT’s architecture department who taught a workshop called Mass Timber Design that came up with the new design, explains that “in North America, we have an abundance of forest resources, and a lot of it is overgrown. There’s an effort to find ways to use forest products sustainably, and the forests are actively undergoing thinning processes to prevent forest fires and beetle infestations.”

People tend to think of wood as a suitable material for structures just a few stories high, but not for larger structures, Klein says. But already some builders are beginning to use mass timber products (a term that basically applies to any wood products much larger than conventional lumber) for bigger structures, including medium-rise buildings of up to 20 stories. Even taller buildings should ultimately be practical with this technology, he says. One of the largest mass timber buildings in the U.S. is the new 82,000-square-foot John W. Olver Design Building at the University of Massachusetts at Amherst.

One of the first questions people raise when they hear of such construction has to do with fire. Can such tall wooden structures really be safe? In fact, Klein says, tests have demonstrated that mass timber structures can resist fire as well or better than steel. That’s because wood exposed to fire naturally produces a layer of char, which is highly insulating and can protect the bulk of the wood for more than two hours. Steel, in contrast, can fail suddenly when heat softens it and causes it to buckle.

Klein explains that this natural fire resistance makes sense when you think about dropping a lit match onto a pile of wood shavings, versus dropping it onto a log. The shavings will burst into flames, but on the log a match will simply sputter out. The greater the bulk of the wood, the better it resists ignition.

The structure designed by the class uses massive beams made from layers of wood veneers laminated together, a process known as laminated veneer lumber (LVL), made into panels 50 feet long, 10 feet wide, and more than 6 inches thick These are cut to size and used to make a series of large arches, 40 feet tall to the central peak and spanning 50 feet across, made of sections with a triangular cross-section to add structural strength. A series of these arches is assembled to create a large enclosed space with no need for internal structural supports. The pleated design of the roof is designed to accommodate solar panels and windows for natural lighting and passive solar heating.

“The structural depth achieved by building up the triangular section helps us achieve the clear span desired for the communal space, all while lending a visual language on both the interior and the exterior of the structure,” says Demi Fang, an MIT architecture graduate student who was part of the design team. “Each arch tapers and widens along its length, because not every point along the arch will be subject to the same magnitude of forces, and this varying cross-section depth both expresses structural performance while encouraging materials savings,” she says.

The arches would be factory-built in sections, and then bolted together on site to make the complete building. Because the building would be largely prefabricated, the actual on-site construction process would be greatly streamlined, Klein says.

“The Longhouse is a multifunctional building, designed to accommodate a range of event scenarios from co-working, exercise classes, social mixers, exhibitions, dinner gatherings and lectures,” Klein says, adding that it builds on a long tradition of such communal structures in cultures around the world.

Whereas the production of concrete, used in most of the world’s large buildings, involves large releases of greenhouse gases from the baking of limestone, construction using mass timber has the opposite effect, Klein says. While concrete adds to the world’s burden of greenhouse gases, timber actually lessens it, because the carbon removed from the air while trees grow is essentially sequestered for as long as the building lasts. “The building is a carbon sink,” he says.

One obstacle to greater use of mass timber for large structures is in current U.S. building codes, Klein says, which limit the use of structural wood to residential buildings up to five stories, or commercial buildings up to six stories. But recent construction of much taller timber buildings in Europe, Australia, and Canada — including an 18-story timber building in British Columbia — should help to establish such buildings’ safety and lead to the needed code changes, he says.

Steve Marshall, an assistant director of cooperative forestry with the U.S. Forest Service, who was not involved in this project, says “Longhouse is a wonderfully creative and beautifully executed example of the design potential for mass timber.” He adds that “mass timber is poised to become a significant part of how America builds. The sustainability implications for the places we live, work, and play are huge. In addition to the well-known ramifications such as the sequestration of carbon within the buildings, there are also community benefits such as dramatically reduced truck traffic during the construction process.”

The Longhouse design was developed by a cross-disciplinary team in 4.S13 (Mass Timber Design), a design workshop in MIT’s architecture department that explores the future of sustainable buildings. The team included John Fechtel, Paul Short, Demi Fang, Andrew Brose, Hyerin Lee, and Alexandre Beaudouin-Mackay. It was supported by the Department of Architecture, BuroHappold Engineering and Nova Concepts.