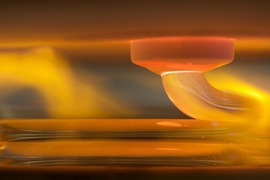 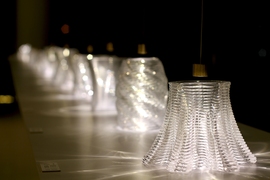 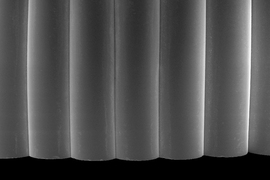 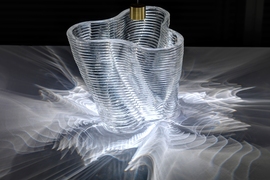 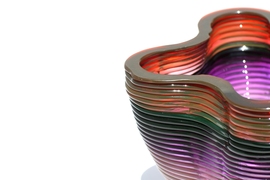 ↓ Download Image
Caption: The ability to introduce variations in color into the stream of molten glass is one of the unusual properties of the new 3-D glass printing system.
Credits: Photo: Chikara Inamura 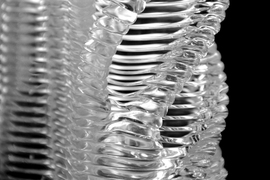 Caption:
The ability to introduce variations in color into the stream of molten glass is one of the unusual properties of the new 3-D glass printing system.
Credits:
Photo: Chikara Inamura

The technology behind 3-D printing — which initially grew out of work at MIT — has exploded in recent years to encompass a wide variety of materials, including plastics and metals. Simultaneously, the cost of 3-D printers has fallen sufficiently to make them household consumer items.

Now a team of MIT researchers has opened up a new frontier in 3-D printing: the ability to print optically transparent glass objects.

The new system, described in the Journal of 3D Printing and Additive Manufacturing, was developed by Neri Oxman, an associate professor at the MIT Media Lab; Peter Houk, director of the MIT Glass Lab; MIT researchers John Klein and Michael Stern; and six others.

Other groups have attempted to 3-D print glass objects, but a major obstacle has been the extremely high temperature needed to melt the material. Some have used tiny particles of glass, melded together at a lower temperature in a technique called sintering. But such objects are structurally weak and optically cloudy, eliminating two of glass’s most desirable attributes: strength and transparency.

The high-temperature system developed by the MIT team retains those properties, producing printed glass objects that are both strong and fully transparent to light. Like other 3-D printers now on the market, the device can print designs created in a computer-assisted design program, producing a finished product with little human intervention.

In the present version, molten glass is loaded into a hopper in the top of the device after being gathered from a conventional glassblowing kiln. When completed, the finished piece must be cut away from the moving platform on which it is assembled.

In operation, the device’s hopper, and a nozzle through which the glass is extruded to form an object, are maintained at temperatures of about 1,900 degrees Fahrenheit, far higher than the temperatures used for other 3-D printing. The stream of glowing molten glass from the nozzle resembles honey as it coils onto a platform, cooling and hardening as it goes.

One challenge the researchers faced was keeping the filament of glass hot enough so the next layer of the structure would adhere to it, but not so hot that the structure would collapse into a shapeless lump. They ended up producing three separate components that can independently be heated to the required temperatures: the upper reservoir for the stock of molten glass, the nozzle at the bottom of that chamber, and a lower chamber where the printed object is built up.

The concept began as a project in a course on additive manufacturing, Klein says; he and others decided to refine the concept when initial work showed the idea had promise. But it was still a long and laborious process, with a lot of trial-and-error.

“Glass is inherently a very difficult material to work with,” Klein says: Its viscosity changes with temperature, requiring precise control of temperature at all stages of the process.

The new process could allow unprecedented control over the glass shapes that can be produced, Oxman says.

“We can design and print components with variable thicknesses and complex inner features — unlike glassblowing, where the inner features reflect the outer shape,” Oxman explains. For example, she adds, “We can control solar transmittance. … Unlike a pressed or blown-glass part, which necessarily has a smooth internal surface, a printed part can have complex surface features on the inside as well as the outside, and such features could act as optical lenses.”

Oxman adds that she foresees the process being adapted to create much larger structures.

Houk cites several additional directions for pushing the research further. One is adding pressure to the system — either through a mechanical plunger or compressed gas — to produce a more uniform flow, and thus a more uniform width to the extruded filament of glass. Additional work will focus on the use of colors in the glass, which the team has already demonstrated in limited testing.

Klein says the printing system is an example of multidisciplinary work facilitated by MIT’s flexible departmental boundaries — in this case, involving team members from the Media Lab, the Department of Mechanical Engineering, and the MIT Glass Lab, which is part of the Department of Materials Science and Engineering.

At MIT, members of the research team also included Markus Kayser, Chikara Inamura, and Shreya Dave. They were joined by James Weaver of Harvard University’s Wyss Institute for Biologically Inspired Engineering and Giorgia Franchin and Paolo Colombo of the University of Padova in Italy.

Jonathan Webb reports for BBC News that MIT researchers have developed a “molten glass sewing machine.” "It does exactly what a sewing machine does," explains applied mathematics instructor Pierre-Thomas Brun. "You go from a thread, to patterns which are tied to each other like stitching patterns - but this time they're made out of glass."

The magic of glass and metal