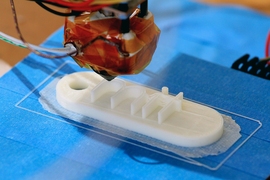 ↓ Download Image
Caption: One of the 3-D printers at work in the Mediated Matter group at the MIT Media Lab.
Credits: Photo: Melanie Gonick 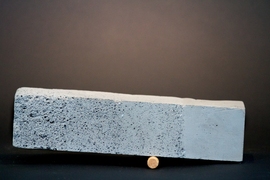 ↓ Download Image
Caption: Concrete samples made by hand to illustrate the concept of density gradient in concrete. A team from the MIT Media Lab hopes to be able to print such materials with a 3-D printer.
Credits: Photo: Steven Keating, Timothy Cooke and John Fernández

Caption:
One of the 3-D printers at work in the Mediated Matter group at the MIT Media Lab.
Credits:
Photo: Melanie Gonick
Imagine being able to “print” an entire house. Or a four-course dinner. Or a complete mechanical device such as a cuckoo clock, fully assembled and ready to run. Or a printer capable of printing … yet another printer?

These are no longer sci-fi flights of fancy. Rather, they are all real (though very early-stage) research projects underway at MIT, and just a few ways the Institute is pushing forward the boundaries of a technology it helped pioneer nearly two decades ago. A flurry of media stories this year have touted three-dimensional printing — or “3DP” — as the vanguard of a revolution in the way goods are produced, one that could potentially usher in a new era of “mass customization.”

One of the first practical 3-D printers, and the first to be called by that name, was patented in 1993 by MIT professors Michael Cima, now the Sumitomo Electric Industries Professor of Engineering, and Emanuel Sachs, now the Fred Fort Flowers (1941) and Daniel Fort Flowers (1941) Professor of Mechanical Engineering. Unlike earlier attempts, this machine has evolved to create objects made of plastic, ceramic and metal. The MIT-inspired 3DPs are now in use “all over the world,” Cima says.

The initial motivation was to produce models for visualization — for architects and others — and help streamline the development of new products, such as medical devices. Cima explains, “The slow step in product development was prototyping. We wanted to be able to rapidly prototype surgical tools, and get them into surgeons’ hands to get feedback.”

3DP technology involves building up a shape gradually, one thin layer at a time. The device uses a “stage” — a metal platform mounted on a piston — that’s raised or lowered by a tiny increment at a time. A layer of powder is spread across this platform, and then a print head similar to those used in inkjet printers deposits a binder liquid onto the powder, binding it together. Then, the platform is lowered infinitesimally, another thin layer of powder is applied on top of the last, and the next layer of binder is deposited.

With its layers of powder, such a system can make complex shapes that earlier liquid-based 3DP systems could not produce. And different combinations of powders and binders could make a variety of materials — “anything you can make from powders: ceramics, metals, plastics,” Cima says — or even a mix of different materials in the same printed object, using different liquids in the print heads, like the different colors of ink in an inkjet printer.

In one early version, the powder was aluminum oxide, the binder was colloidal silica, and the resulting solid objects were brittle, similar to materials sometimes used as molds for metal casting. They provided, for the first time, a relatively simple way to get one’s hands on a three-dimensional version of just about any shape that could be sketched by computer-assisted design (CAD) software, before manufacturers committed to mass production at much greater cost.

Over the years, the three MIT researchers and one of the companies that licensed the MIT patent, Z Corp., added new variations, including the ability to include colors in printed objects and to use a variety of materials. The ability to print metal objects, in particular, extended the technology from just a way of visualizing new designs to a means of manufacturing metal molds used for the injection molding of plastic parts.

Samuel Allen SM ’71, PhD ’75, the POSCO Professor of Physical Metallurgy and chair of the MIT faculty, spent a decade developing the metal-printing process. In producing molds for injection molding, he says, “the plastic shapes can be quite complicated, with round surfaces and thin walls.” In addition to the shapes of the finished parts, the molds need to have channels for the plastic material to be injected, and they have to be designed so that the resulting pieces can cool uniformly without warping. The 3DP process made it possible to make “parts you could not make through conventional machining,” Allen says.

Manufacturing companies took a strong interest in this work because it enabled “doing a complete design for a tool in days, rather than months,” he adds. “That means you can afford to go through more design iterations.”

Time for a snack

3DP has since branched out in a wide array of directions, at various companies and research institutions around the world. Applications have included everything from the printing of customized prosthetic limbs to nanoprinting of tiny machinery to a project at the MIT Media Lab developing machines to print food ranging from candies to complete meals. One former Media Lab student, Peter Schmitt PhD ’11, working with Media Lab IP consultant Bob Swartz, has printed entire working clocks — with all their gears, chains, faces and hands in a single unit — ready to start ticking as soon as the surplus powder is washed away.

“Mass production is only a couple of hundred years old,” Swartz says. Now, “we’re moving into an area where things will no longer be mass produced.” With 3DP, a basic pattern can be modified to fit an individual’s size, fit and personal tastes before printing.

These clocks were primarily intended to demonstrate that complex devices could be printed as a unit — but one clock took about 100 hours of printing time to produce. “That’s completely impractical for any kind of mass production,” Swartz says, “but it’s my belief that one can get orders-of-magnitude improvements” in the production speed. “It changes the way we think about production.”

Another variant underway now is a system being developed by Neri Oxman PhD ’10, the Media Lab’s Sony Corporation Career Development Assistant Professor of Media Arts and Sciences, and her graduate student Steven Keating for “printing” concrete. Their ultimate aim: printing a complete structure, even a whole building.

Why do that, instead of the tried-and-true method of casting concrete in wooden forms that dates from the heyday of the Roman Empire? In part, Oxman explains, because it opens up new possibilities in both form and function. Not only would it be possible to create fanciful, organic-looking shapes that would be difficult or impossible using molds, but the technique could also allow the properties of the concrete itself to vary continuously, producing structures that are both lighter and stronger than conventional concrete.

To illustrate this, Keating uses the example of a palm tree compared to a typical structural column. In a concrete column, the properties of the material are constant, resulting in a very heavy structure. But a palm tree’s trunk varies: denser at the outside and lighter toward the center. As part of his thesis research, he has already made sections of concrete with the same kind of variations of density.

“Nature always uses graded materials,” Keating says. Bone, for example, consists of “a hard, dense outer shell, and an interior of spongy material. It gives you a high strength-to-weight ratio. You don’t see that in man-made materials.” Not yet, at least.

Concrete samples made by hand to illustrate the concept of density gradient in concrete. A team from the MIT Media Lab hopes to be able to print such materials with a 3-D printer.
Photo: Steven Keating, Timothy Cooke and John Fernández

Variable-density printing is not just about large-scale objects. For example, Oxman has used a similar system to produce a glove with sections that are stiff and others that are flexible, designed to help prevent the wearer from developing carpal tunnel syndrome. She has also designed a chair made of different polymers, producing stiff areas for structural support and flexible areas for comfort, all printed out as a single unit.

Peter Schmitt, now a visiting scientist at the Media Lab, is pushing the technology in an even more sci-fi direction, trying to “build machines that could build machines,” he says. So far, he’s succeeded in making machines that can make many of the parts for another machine, but there remain many obstacles in establishing connections among these — and it’s still more of an intellectual exercise than a practical system, he concedes. “There are better ways to make the parts,” he says. “But at some point, these kinds of things will happen.”