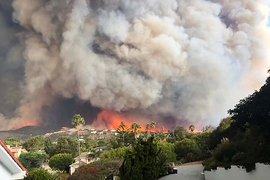 ↓ Download Image
Caption: Whenever organic matter is burned, such as in a wildfire, a power plant, a car’s exhaust, or in daily cooking, the combustion releases polycyclic aromatic hydrocarbons (PAHs) — a class of pollutants that is known to cause lung cancer.

Caption:
Whenever organic matter is burned, such as in a wildfire, a power plant, a car’s exhaust, or in daily cooking, the combustion releases polycyclic aromatic hydrocarbons (PAHs) — a class of pollutants that is known to cause lung cancer.

Whenever organic matter is burned, such as in a wildfire, a power plant, a car’s exhaust, or in daily cooking, the combustion releases polycyclic aromatic hydrocarbons (PAHs) — a class of pollutants that is known to cause lung cancer.

There are more than 100 known types of PAH compounds emitted daily into the atmosphere. Regulators, however, have historically relied on measurements of a single compound, benzo(a)pyrene, to gauge a community’s risk of developing cancer from PAH exposure. Now MIT scientists have found that benzo(a)pyrene may be a poor indicator of this type of cancer risk.

In a modeling study appearing today in the journal GeoHealth, the team reports that benzo(a)pyrene plays a small part — about 11 percent — in the global risk of developing PAH-associated cancer. Instead, 89 percent of that cancer risk comes from other PAH compounds, many of which are not directly regulated.

The team hopes the results will encourage scientists and regulators to look beyond benzo(a)pyrene, to consider a broader class of PAHs when assessing a community’s cancer risk.

“Most of the regulatory science and standards for PAHs are based on benzo(a)pyrene levels. But that is a big blind spot that could lead you down a very wrong path in terms of assessing whether cancer risk is improving or not, and whether it’s relatively worse in one place than another,” says study author Noelle Selin, a professor in MIT’s Institute for Data, Systems and Society, and the Department of Earth, Atmospheric and Planetary Sciences.

Benzo(a)pyrene has historically been the poster chemical for PAH exposure. The compound’s indicator status is largely based on early toxicology studies. But recent research suggests the chemical may not be the PAH representative that regulators have long relied upon.

“There has been a bit of evidence suggesting benzo(a)pyrene may not be very important, but this was from just a few field studies,” says Kelly, a former postdoc in Selin’s group and the study’s lead author.

Kelly and his colleagues instead took a systematic approach to evaluate benzo(a)pyrene’s suitability as a PAH indicator. The team began by using GEOS-Chem, a global, three-dimensional chemical transport model that breaks the world into individual grid boxes and simulates within each box the reactions and concentrations of chemicals in the atmosphere.

They extended this model to include chemical descriptions of how various PAH compounds, including benzo(a)pyrene, would react in the atmosphere. The team then plugged in recent data from emissions inventories and meteorological observations, and ran the model forward to simulate the concentrations of various PAH chemicals around the world over time.

In their simulations, the researchers started with 16 relatively well-studied PAH chemicals, including benzo(a)pyrene, and traced the concentrations of these chemicals, plus the concentration of their degradation products over two generations, or chemical transformations. In total, the team evaluated 48 PAH species.

They then compared these concentrations with actual concentrations of the same chemicals, recorded by monitoring stations around the world. This comparison was close enough to show that the model’s concentration predictions were realistic.

Then within each model’s grid box, the researchers related the concentration of each PAH chemical to its associated cancer risk; to do this, they had to develop a new method based on previous studies in the literature to avoid double-counting risk from the different chemicals. Finally, they overlaid population density maps to predict the number of cancer cases globally, based on the concentration and toxicity of a specific PAH chemical in each location.

Dividing the cancer cases by population produced the cancer risk associated with that chemical. In this way, the team calculated the cancer risk for each of the 48 compounds, then determined each chemical’s individual contribution to the total risk.

This analysis revealed that benzo(a)pyrene had a surprisingly small contribution, of about 11 percent, to the overall risk of developing cancer from PAH exposure globally. Eighty-nine percent of cancer risk came from other chemicals. And 17 percent of this risk arose from degradation products.

“We see places where you can find concentrations of benzo(a)pyrene are lower, but the risk is higher because of these degradation products,” Selin says. “These products can be orders of magnitude more toxic, so the fact that they’re at tiny concentrations doesn’t mean you can write them off.”

When the researchers compared calculated PAH-associated cancer risks around the world, they found significant differences depending on whether that risk calculation was based solely on concentrations of benzo(a)pyrene or on a region’s broader mix of PAH compounds.

“If you use the old method, you would find the lifetime cancer risk is 3.5 times higher in Hong Kong versus southern India, but taking into account the differences in PAH mixtures, you get a difference of 12 times,” Kelly says. “So, there’s a big difference in the relative cancer risk between the two places. And we think it’s important to expand the group of compounds that regulators are thinking about, beyond just a single chemical.”

The team’s study “provides an excellent contribution to better understanding these ubiquitous pollutants,” says Elisabeth Galarneau, an air quality expert and PhD research scientist in Canada’s Department of the Environment. “It will be interesting to see how these results compare to work being done elsewhere … to pin down which (compounds) need to be tracked and considered for the protection of human and environmental health.”

Study: Impact of mercury-controlling policies shrinks with every five-year delay