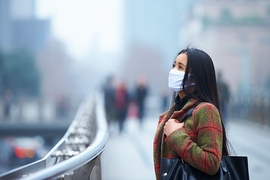 ↓ Download Image
Caption: “In China, as you go to tighter and tighter climate policies, you continue to reduce pollutant emissions from coal, whereas the U.S. has already reduced a lot of its air pollution from coal through end-of-pipe technologies,” Karplus says.

Caption:
“In China, as you go to tighter and tighter climate policies, you continue to reduce pollutant emissions from coal, whereas the U.S. has already reduced a lot of its air pollution from coal through end-of-pipe technologies,” Karplus says.

A new MIT study reports that if China follows through with its international pledge to reduce carbon dioxide emissions, every one of its provinces will experience benefits to air quality and human health, with associated monetary savings that could offset the total cost of implementing the climate policy.

The study, published  today in Nature Climate Change, estimates that by meeting its greenhouse gas-reduction goals, China would simultaneously improve its air quality, which would avoid a significant number of deaths due to air pollution, across every province. Fewer deaths from air pollution means a benefit for society that can be quantified — a $339 billion savings in 2030 that the researchers estimate could be about four times what it would cost China to meet its climate goals.

In other words, the country’s climate policy would more than pay for itself.

“The country could actually come out net positive, just based on the health co-benefits associated with air quality improvements, relative to the cost of a climate policy,” says study co-author Noelle Eckley Selin, an associate professor in MIT’s Institute for Data, Systems, and Society and the Department of Earth, Atmospheric and Planetary Sciences (EAPS). “This is a motivating factor for countries to engage in global climate policy.”

The study was led by Selin and Valerie Karplus, the Class of 1943 Career Development Assistant Professor of Global Economics and Management in MIT’s Sloan School of Management. Both co-authors are faculty affiliates of the Joint Program on the Science and Policy of Global Change. Their co-authors include EAPS graduate student and lead author Mingwei Li, research scientist and co-first author Da Zhang, former postdoc Chiao-Ting Li, and former research assistant Kathleen Mulvaney, a graduate of MIT’s Technology and Policy Program.

As part of the 2015 Paris Agreement on climate change, China has pledged, along with virtually every other nation in the world, to reduce domestic carbon dioxide emissions, in an international effort to keep global temperatures from rising more than 2 degrees Celsius above preindustrial levels.

China is the largest emitter of greenhouse gases in the world, mainly due to the fact that much of the country’s energy comes from coal-fired power plants, which are a major source of the greenhouse gas carbon dioxide. In addition to the climate impact, burning coal has led to significant air pollution and respiratory problems throughout China.

The MIT team, which includes a mix of economists and atmospheric scientists, looked at whether China’s local air quality and public health might benefit from a national policy meant to improve the global climate.

“Air pollution is an immediate problem that is directly linked to many of the economic, energy-related activities that are also responsible for greenhouse gases,” Karplus says. “We wanted to understand to what extent you could address air quality by targeting carbon dioxide through a representative climate policy, carbon pricing.”

Many researchers have explored air quality as a potential climate policy “co-benefit,” or beneficial outcome that is not directly targeted by climate policy. Karplus and Selin decided to take this a step further, to see how such a co-benefit would change with a policy’s stringency. For instance, would air quality and human health improve under a policy that aims for higher reductions in carbon dioxide?

C-REM models China’s economy and energy system at a provincial level, and the researchers used the model to simulate how a given climate policy changes a province’s economic activity, energy use, and emissions of carbon dioxide and air pollutants. They ran simulations under four stringency scenarios: a no-policy, business-as-usual scenario; and three different policy scenarios that aimed to reduce carbon dioxide emissions by 3, 4, and 5 percent per year, respectively, through 2030. The 4 percent scenario is in line with China’s pledge to reach peak carbon dioxide emissions before 2030 under the Paris Agreement.

The team then plugged the results of each scenario into the GEOS-Chem model, which simulates how the various emissions and pollutants produced by C-REM combine in the atmosphere to form particulate matter, the concentrations of which the researchers could estimate, province by province. They overlayed this map of particulate concentrations onto population maps to calculate the amount of pollution that communities are breathing in.

The team then consulted epidemiological literature to determine the number of avoided deaths that would occur, based on a province’s exposure to a certain amount of pollution. Finally, the researchers calculated the economic value of these deaths using standard methods, and compared this with the total cost of implementing a given policy scenario.

“When you price carbon dioxide emissions, that incentivizes reducing or switching from using fossil fuels to cleaner, more expensive sources of energy, which has economic costs,” Karplus says. “The total economic impact of these shifts can be quantified in our model.”

In sum, the team found that, under a no-policy scenario, China would suffer more than 2.3 million premature, pollution-related deaths by 2030. If the country adopts a climate policy to reduce emissions by 3, 4, or 5 percent per year, it would avoid 36,000, 94,000, and 160,000 premature deaths, respectively. In other words, the country’s health co-benefits would increase as climate policies became more stringent.

After converting each scenario’s health co-benefits into a monetary value, the team found that, compared to the total cost of implementing a 3, 4, or 5 percent per year policy, the savings gained as a result of health co-benefits equals $138.4 billion, $339.6 billion, and $534.8 billion, respectively. In the 4 percent scenario, which is most in line with China’s actual climate pledge, a net co-benefit of $339.6 billion would be about four times the cost of implementing the policy itself.

Selin and Karplus say that, in China’s case, improvements to air quality and human health would increase with more stringent climate policies, mainly because the country’s energy is so heavily reliant on coal.

“In China, as you go to tighter and tighter climate policies, you continue to reduce pollutant emissions from coal, whereas the U.S. has already reduced a lot of its air pollution from coal through end-of-pipe technologies,” Karplus says. “The incremental reductions you’re taking are coming from a fuel with a very high carbon content, which is also the major source of air pollution.”

The team stresses that a climate policy alone will not solve any country’s air pollution problems. However, the study shows that significant reductions in greenhouse gas emissions will result in better air quality, compared to continuing along on a business-as-usual path.

“This is really a sustainability story,” Selin says. “We have all these policy goals for a transition toward a more sustainable society. Mitigating air pollution, a leading cause of death, is one of them, and avoiding dangerous climate change is another. Thinking about how we might inform policy to address these objectives simultaneously, when they actually interact economically and atmospherically, is important to sort out from a science perspective.”

This research was conducted by researchers in the China Energy and Climate Project and supported in part by its founding sponsors Eni S.p.A., ICF International, and Shell International Ltd., through the MIT Energy Initiative, as well as the French Development Agency, the MIT Environmental Solutions Initiative, and the Energy Information Administration at the U.S. Department of Energy. The CECP was a special initiative of the MIT Joint Program on the Science and Policy of Global Change. Online interactive results of the study are available at cecp.mit.edu.

In an article for Salon, Associate Prof. Noelle Eckley Selin and postdoc Sae Yun Kwon discuss their latest research, which examined emissions in China. They write that although mercury pollution is often associated with fish consumption, “China’s future emissions trajectory can have a measurable influence on the country’s rice methylmercury” levels, as well.

A new study finds that a 4% reduction in China's carbon emissions by 2030 could save a total of $464.5 billion in healthcare costs, writes Chase Purdy for Quartz. “We have all these policy goals for a transition toward a more sustainable society,” says Associate Prof. Noelle Selin. “Mitigating air pollution, a leading cause of death, is one of them, and avoiding dangerous climate change is another.”

Using several comparative models, a new study led by MIT researchers reveals that China’s pledge to peak its carbon emissions by 2030 could cut down on as many as 160,000 premature deaths. “Politically, the research confirms why Chinese officials have their own internal reasons to cut CO2 even though the U.S. is abandoning Paris and disengaging internationally on climate,” writes Ben Geman for Axios.