Savings from healthier air can make up for some or all of the cost of carbon-reduction policies.
Audrey Resutek | Joint Program on the Science and Policy of Global Change
Publication Date:
Press Inquiries 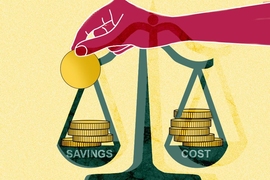 Lower rates of asthma and other health problems are frequently cited as benefits of policies aimed at cutting carbon emissions from sources like power plants and vehicles, because these policies also lead to reductions in other harmful types of air pollution.

But just how large are the health benefits of cleaner air in comparison to the costs of reducing carbon emissions? MIT researchers looked at three policies achieving the same reductions in the United States, and found that the savings on health care spending and other costs related to illness can be big — in some cases, more than 10 times the cost of policy implementation.

Selin and colleagues compared the health benefits to the economic costs of three climate policies: a clean-energy standard, a transportation policy, and a cap-and-trade program. The three were designed to resemble proposed U.S. climate policies, with the clean-energy standard requiring emissions reductions from power plants similar to those proposed in the Environmental Protection Agency’s Clean Power Plan.

The researchers found that savings from avoided health problems could recoup 26 percent of the cost to implement a transportation policy, but up to to 10.5 times the cost of implementing a cap-and-trade program. The difference depended largely on the costs of the policies, as the savings — in the form of avoided medical care and saved sick days — remained roughly constant: Policies aimed at specific sources of air pollution, such as power plants and vehicles, did not lead to substantially larger benefits than cheaper policies, such as a cap-and-trade approach.

Savings from health benefits dwarf the estimated $14 billion cost of a cap-and-trade program. At the other end of the spectrum, a transportation policy with rigid fuel-economy requirements is the most expensive policy, costing more than $1 trillion in 2006 dollars, with health benefits recouping only a quarter of those costs. The price tag of a clean energy standard fell between the costs of the two other policies, with associated health benefits just edging out costs, at $247 billion versus $208 billion.

“If cost-benefit analyses of climate policies don’t include the significant health benefits from healthier air, they dramatically underestimate the benefits of these policies,” says lead author Tammy Thompson, now at Colorado State University, who conducted the research as a postdoc in Selin’s group.

Most detailed assessment to date

The study is the most detailed assessment to date of the interwoven effects of climate policy on the economy, air pollution, and the cost of health problems related to air pollution. The MIT group paid especially close attention to how changes in emissions caused by policy translate into improvements in local and regional air quality, using comprehensive models of both the economy and the atmosphere.

In addition to carbon dioxide, burning fossil fuels releases a host of other chemicals into the atmosphere. Some of these substances interact to form ground-level ozone, as well as fine particulate matter. The researchers modeled where and when these chemical reactions occurred, and where the resulting pollutants ended up — in cities where many people would come into contact with them, or in less populated areas.

The researchers projected the health effects of ground-level ozone and fine particulate matter, two of the biggest health offenders related to fossil-fuel emissions. Both pollutants can cause asthma attacks and heart and lung disease, and can lead to premature death.

In 2011, 231 counties in the U.S. exceeded the EPA’s regulatory standards for ozone, the main component of smog. Standards for fine particulate matter — airborne particles small enough to be inhaled deep into the lungs and even absorbed into the bloodstream — were exceeded in 118 counties.

While cutting carbon dioxide from current levels in the U.S. will result in savings from better air quality, pollution-related benefits decline as carbon policies become more stringent. Selin cautions that after a certain point, most of the health benefits have already been reaped, and additional emissions reductions won’t translate into greater improvements.

The study shows that climate policies can also have significant local benefits not related to their impact on climate, says Gregory Nemet, a professor of public affairs and environmental studies at the University of Wisconsin at Madison who was not involved in the study.

“A particularly notable aspect of this study is that even though several recent studies have shown large co-benefits, this study finds large co-benefits in the U.S., where air quality is assumed to be high relative to other countries,” Nemet says. “Now that states are on the hook to come up with plans to meet federal emissions targets by 2016, you can bet they will take a close look at these results.”

This research was supported by funding from the EPA’s Science to Achieve Results program.

James Hamblin of The Atlantic reports on the new MIT study that shows implementing a cap on carbon emissions would result in health care savings. An economy-wide cap and trade program "would result in a net benefit of $125 billion in human health costs,” writes Hamblin.

CBC News reports on the MIT study examining how carbon reduction policies impact health care spending. “They discovered that the greatest health savings came from the cap-and-trade program, with savings coming in at 10.5 times the $14.5-billion cost of such a program,” CBC reports.

Researchers reveal strategies for mercury reduction in time for negotiations

China’s pollution puts a dent in its economy