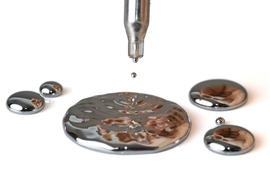 ↓ Download Image
Caption: In a new study published this week, MIT researchers report that global action on reducing mercury emissions will lead to twice the economic benefits for the U.S., compared to domestic action, by 2050.

Caption:
In a new study published this week, MIT researchers report that global action on reducing mercury emissions will lead to twice the economic benefits for the U.S., compared to domestic action, by 2050.

Mercury pollution is a global problem with local consequences: Emissions from coal-fired power plants and other sources travel around the world through the atmosphere, eventually settling in oceans and waterways, where the pollutant gradually accumulates in fish. Consumption of mercury-contaminated seafood leads to increased risk for cardiovascular disease and cognitive impairments.

In the past several years, a global treaty and a domestic policy have been put in place to curb mercury emissions. But how will such policies directly benefit the U.S.?

In a new study published this week in the Proceedings of the National Academy of Sciences, MIT researchers report that global action on reducing mercury emissions will lead to twice the economic benefits for the U.S., compared with domestic action, by 2050. However, those in the U.S. who consume locally caught freshwater fish, rather than seafood from the global market, will benefit more from domestic rather than international mercury regulations.

The researchers calculated the projected U.S. economic benefits from the Minamata Convention on Mercury, a global treaty adopted in 2013 to reduce mercury emissions worldwide, compared with the Mercury and Air Toxics Standards (MATS), a national regulation set by the U.S. Environmental Protection Agency to reduce mercury pollution from the country’s coal-fired power plants.

Overall, while both policies are projected to lead to roughly the same amount of reductions in mercury deposited on U.S. soil compared to a no-policy case, Americans’ consumption of mercury by 2050 are estimated to be 91 percent lower under the global treaty, compared to 32 percent under U.S. policy alone. The researchers say these numbers reflect the U.S. commercial fish market, 90 percent of which is sourced from Pacific and Atlantic Ocean basins — regions that are heavily influenced by emissions from non-U.S. sources, including China.

From their projections of reduced mercury consumption, the researchers estimated health impacts to the U.S. population under both policies, then translated these impacts into economic benefits. They characterized these in two ways: projected lifetime benefits from an individual’s reduced exposure to mercury, including willingness to pay for lowering the risk of a fatal heart attack, cost savings from avoided medical care, and increased earnings; and economy-wide benefits, or the associated productivity gains of a national labor force with improved IQ and fewer heart attacks, as a result of reduced exposure to mercury.

Based on these calculations, the team estimated that by 2050, emissions reductions under the Minamata Convention on Mercury would lead to $339 billion in lifetime benefits and $104 billion in economy-wide benefits in the U.S., compared to $147 billion and $43 billion, respectively, from MATS. The global treaty, then, should lead to more than twice the benefits projected from the domestic policy.

“Historically it’s been hard to quantify benefits for global treaties,” says Noelle Selin, the Esther and Harold E. Edgerton Career Development Associate Professor in MIT’s Institute for Data, Systems and Society and in the Department of Earth, Atmospheric, and Planetary Sciences. “Would we be able to see a U.S. benefit, given you’re spreading reductions and benefits around the world? And we were.”

Determining how regulatory policies will ultimately lead to health and economic benefits is a complex and convoluted problem. To trace the pathway from policy to impacts, Selin and co-author Amanda Giang, a graduate student in MIT’s Institute for Data, Systems, and Society, began with estimates of mercury reductions set by both the Minamata Convention and MATS.

The team then used an atmospheric transport model to trace where emissions would settle over time, based on the reductions proposed by each policy scenario. From regional depositions of mercury, they then estimated the resulting mercury concentrations in fish and mapped these concentrations to seafood sources throughout the world.

Next, the team correlated seafood sources to fish consumption in the U.S., and calculated changes in human exposure to mercury through time. They used epidemiological models to estimate how changes in mercury exposure affect incidence of health impacts, such as heart attacks and IQ deficits. From there, Selin and Giang used economic valuation methods to translate heath impacts into economic benefits — namely, lifetime and economy-wide benefits to the U.S.

While the researchers were able to come up with benefits in the billions for both the global and domestic policies, they acknowledge that these numbers come with a significant amount of uncertainty, which they also explored.

For example, scientists are unsure how far different forms of mercury will travel through the atmosphere, as well as how long it will take for mercury to accumulate in fish. In their analysis, Giang found that, even taking into account most of these uncertainties, the economic benefits from the global treaty outweighed those from the domestic policy, except when it came to one key uncertainty: where people’s seafood originates.

“We do find that in our scenario where everyone is eating local fish, the benefits of domestic policy are going to be larger than the Minamata convention,” Giang says. “Our study points to the importance of domestic policy in terms of protecting vulnerable populations such as subsistence fishers or other communities that do rely on U.S. freshwater fish.”

“There are a ton of uncertainties here, but we know that mercury is a dangerous pollutant,” Selin adds. “When you put in a policy, how do you think about its ultimate environmental and human effects? We think this method is really a way to try and move that forward.”

“This is a terrific and very comprehensive study from a great research group,” says Charles Driscoll, professor of Environmental Systems at Syracuse University. "The study is timely because of challenges to the domestic Mercury and Air Toxics Standard through a Supreme Court ruling. This analysis of benefits builds considerably on the analysis of benefits conducted by the EPA when they established MATS. I think this is an important study and hopefully it will have considerable impact."