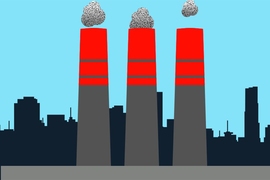 Once mercury is emitted into the atmosphere from the smokestacks of power plants, the pollutant has a complicated trajectory; even after it settles onto land and sinks into oceans, mercury can be re-emitted back into the atmosphere repeatedly. This so-called “grasshopper effect” keeps the highly toxic substance circulating as “legacy emissions” that, combined with new smokestack emissions, can extend the environmental effects of mercury for decades.

Now an international team led by MIT researchers has conducted a new analysis that provides more accurate estimates of sources of mercury emissions around the world. The analysis pairs measured air concentrations of mercury with a global simulation to calculate the fraction of mercury that is either re-emitted or that originates from power plants and other anthropogenic activities. The result of this work, researchers say, could improve estimates of mercury pollution, and help refine pollution-control strategies around the world.

The new analysis shows that Asia now releases a surprisingly large amount of anthropogenic mercury. While its increased burning of coal was known to exacerbate mercury emissions and air pollution, the MIT team estimates that Asia produces more than double the mercury emissions previously estimated.

Noelle Selin, the Esther and Harold E. Edgerton Career Development Associate Professor in MIT’s Institute for Data, Systems, and Society and the Department of Earth, Atmospheric and Planetary Sciences, says the new analysis can also give scientists a better idea of how long legacy emissions — mercury re-emitted by the land and ocean — stick around in the atmosphere. This is because the analysis can more accurately calculate the total amount emitted by land and ocean sources.

“The timescale under which mercury circulates in the environment tells us about how fast we’ll recover if we limit mercury emissions,” Selin says. “We can better quantify mercury cycling with this method.”

Selin and Shaojie Song, a graduate student in EAPS, have published their results in the journal Atmospheric Chemistry and Physics.

The team’s analysis improves on other models that take a bottom-up approach. Such models estimate mercury emissions for a region by considering factors such as the amount of coal burned in a power plant and the types of equipment in a plant used to control emissions. Models then often extrapolate data from a few sources to apply to an entire region.

However, there are a number of uncertainties with such bottom-up modeling, and it’s often difficult to obtain the required data from individual power plants.

Instead, Selin and Song’s analysis takes a top-down approach, combining bottom-up estimates with actual measurements of mercury emissions from monitoring stations around the world.

In their analysis, the team took bottom-up estimates of mercury emissions from a 2010 emissions inventory by the United Nations — a frequently used source of estimated anthropogenic emissions around the world. The researchers plugged these emissions into a global mercury transport model called GEOS-Chem — a model originally developed by Selin that has since been used widely to track how mercury circulates through the land, ocean, and air.

The GEOS-Chem model essentially divides the atmosphere into many small boxes. After plugging in bottom-up estimates of mercury emissions, the researchers ran the model to simulate the chemical and physical processes that act to circulate mercury within and between boxes. They then obtained actual measurements of mercury emissions taken from monitoring stations around the world. They compared each station’s measurements with the model’s estimates for the corresponding box in which the station was located.

“We can definitely see some differences, which tells us the [bottom-up] emissions may be wrong in some places,” Song says.

For locations where the measured and modeled emissions did not match up, the group used a Bayesian inversion method — a mathematical probability theory that combines observations with prior knowledge to model uncertainty. With this method, Selin and Song determined, for each station’s location, the quantitative contribution of mercury sources that would make up the total measured concentrations. For example, a location in the middle of the ocean, far from any terrestrial sources, is more likely to see mercury emissions that are re-emitted from the ocean, rather than from terrestrial or anthropogenic sources. Then, in a first application of these techniques to global mercury concentrations, they used this quantitative approach to calculate what measured concentrations implied about their sources.

By their calculations, the researchers estimated that, worldwide, Asia could produce up to 1,770 tons of mercury emissions per year — more than twice the amount estimated by bottom-up models.

“It was higher than we expected,” Selin says. “Given the pollution in China and India and increased use of coal, it does make sense. It wasn’t an out-of-the-ballpark result, but it does give you some pause to think about how much mercury could be coming out of Asia.”

In related work published this spring, Selin’s research group assessed how a new U.N. treaty could affect future mercury emissions from coal-fired power plants in Asia. They concluded that future emissions controls would have both global and domestic benefits.

In their more recent top-down analysis, the team also found that fewer mercury emissions came from terrestrial sources, meaning the land re-emitted a smaller amount of legacy emissions than expected — a small silver lining in a world of continuing mercury pollution, according to Selin.

“That means that legacy mercury is a smaller fraction of present-day mercury emissions than we thought, which means that the policy lever for addressing mercury pollution through controlling current emissions is slightly larger,” Selin says. “You still have to worry a lot about legacy emissions, but we could recover a bit more quickly because they are a smaller fraction of the total.”