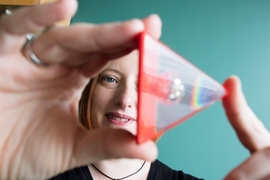 ↓ Download Image
Caption: “I remain optimistic about the ability of international agreements to address environmental problems, primarily because that’s the only solution we have at this point,” associate professor Noelle Selin says. 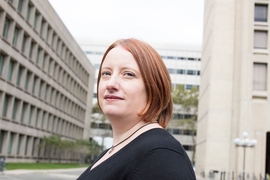 ↓ Download Image
Caption: “I remain optimistic about the ability of international agreements to address environmental problems, primarily because that’s the only solution we have at this point,” associate professor Noelle Selin says.

Caption:
“I remain optimistic about the ability of international agreements to address environmental problems, primarily because that’s the only solution we have at this point,” associate professor Noelle Selin says.

In 1995, the Governing Council of the United Nations Environment Program called for a united, global effort to reduce persistent organic pollutants (POPs) — synthetic chemicals such as PCBs, DDT, and dioxins. The compounds were known to persist and accumulate far from their sources, polluting the environment and causing adverse health effects in humans.

As work on a global treaty progressed, Noelle Eckley Selin, then a college intern at the Environmental Protection Agency, had the opportunity to play a small part in the process that eventually produced the Stockholm Convention on Persistent Organic Pollutants. She was tasked in 1997 with evaluating potential chemicals as add-ons to the “dirty dozen” that the treaty proposed to regulate.

“The treaty was designed as a dynamic instrument, so countries could add chemicals to it to respond to emerging threats,” recalls Selin, now a tenured associate professor in MIT’s Institute for Data, Systems, and Society (IDSS) and the Department of Earth, Atmospheric and Planetary Sciences (EAPS). “But the EPA wanted to know what scientific criteria to use to choose those substances. So I had to go into the dusty basement of the EPA and look up how long these random chemicals persisted in the environment.”

Selin presented her findings to EPA officials, including the agency’s assistant administrators.

“That experience gave me the sense that even as an undergrad with some scientific knowledge, I had a lot to contribute,” Selin says. “It really introduced me to toxics in the environment, which is the entire theme of my research group now, and also highlighted the connection between basic science and international politics.”

At MIT, Selin, a member of the Joint Program on the Science and Policy of Global Change and the Center for Environmental Health Sciences, is using atmospheric chemistry models to understand how international environmental treaties and regulations affect the transport of toxins they aim to control. She is developing tools to trace the way emissions transform and move through the atmosphere, and how their behavior may affect human populations, under both no-policy and global-action scenarios.

“I remain optimistic about the ability of international agreements to address environmental problems, primarily because that’s the only solution we have at this point,” Selin says. “We have to come together as a global community, and for all the challenges of the international setting, we have to try to make it work, because that’s the only way we know to mitigate global-scale human damages to the environment.”

An environment for optimism

Selin was born and raised in Medford, Massachusetts, where she became a lifelong fan of the Boston Red Sox. (One wall of her MIT office is painted in the exact shade of Fenway Park’s Green Monster.) Her father was a firefighter, and her mother worked as the secretary to Medford’s mayor, affording Selin a front-row seat to the city’s local politics.

“When I was little, I stood out with signs and put stickers on mailing labels, and in high school, I wrote speeches for local council candidates and worked for my state senator in the summers,” Selin recalls. “Local politics was something the whole family was involved in.”

She became interested in the politics of the environment as a junior in high school, when she took a class in ecology that introduced her to ways in which environmental and climate issues were connected to politics. In particular, Selin remembers learning about the United Nations Framework Convention on Climate Change, the international treaty to mitigate greenhouse gas emissions, that had just been signed in 1992 and entered into force in 1994.

“There was really a lot of optimism at the time,” Selin says. “It was a key point in history when, though we had known about climate change for a long time, it was on the international political agenda in ways it hadn’t been before.”

Selin went to Harvard University to pursue a bachelor’s degree in environmental science and public policy, a relatively new interdisciplinary major at the time.

“I was attracted to the fact that I didn’t have to choose between science and politics,” Selin says.

After her experience interning at the EPA after her first year at Harvard, Selin returned to campus, committed to studying the ways in which science can be used to influence and inform international decision-making. She completed a master’s degree in earth and planetary sciences, studying how POPs chemically morph and move through the atmosphere.

Selin then spent a year in Copenhagen, Denmark, on a Fullbright Scholarship, where she worked at the European Environment Agency, looking for ways to improve scientific assessments of chemicals and their impact in the environment. It was during this time that she had the chance to sit in on the final negotiations of the Stockholm Convention. The experience was both gratifying and motivating.

“When you study environmental issues, there’s a lot of things that are going wrong, a lot of problems with the world,” Selin says. “So to see a moment when people are actually getting together and taking a clear, concrete step to solve a problem is unique, and it gives you a lot of hope that we can actually address some of the big environmental challenges of our time.”

Selin returned to Harvard for a PhD in earth and planetary science, where she attempted to develop a global model to simulate the transport of POPs through the atmosphere. She next moved on to mercurcy, a toxic pollutant emitted mostly from coal-fired power plants.

“After about a year of banging my head against the wall on POPs, it looked to me like mercury was a more tractable problem,” Selin says. “It had similarities to POPs in that mercury is a globally transported pollutant, but we didn’t know the atmospheric chemistry of mercury, and whether deposition in the U.S. was from domestic or international sources. It was a new area, and there was growing international policy interest.”

At the time, the Governing Council of the United Nations Environment Program had taken up the question of whether and how mercury should be regulated — a query that would eventually lead to the formation of the Minamata Convention, the global treaty to curb mercury emissions.

Selin developed a global three-dimensional model of mercury’s behavior in the atmosphere, and was able to use the model to identify the pollutant’s lifetime in the environment, the processes controlling its distribution, and how much of the mercury deposited in the U.S. originated from within versus outside the country. Selin continues to improve on and use this model in her work today.

After obtaining her PhD, Selin worked for two years as a postdoc and then a research scientist in MIT’s Joint Program on the Science and Policy of Global Change.

“A year into the postdoc, I got really excited about the possibility of different projects, and I had more ideas than I could do myself,” Selin says. “I really liked the environment at MIT, where if you have an idea, there’s nothing institutional standing in your way. It’s, ‘OK, how are you going to get it done?’ The freedom to explore different ideas and paths is one of the great things about MIT.”

In 2009, she applied for and was accepted to a junior faculty position at MIT, where her research has centered on toxic substances in the environment and the atmosphere, including ozone, particulate matter, mercury, and POPs. As a faculty member in IDSS and EAPS, she’s using and developing modeling tools to understand how toxic substances travel through the environment. She’s also applying methods to estimate how societal actions — in particular, global treaties and commitments — affect the transport of associated chemicals, and whether such efforts successfully remediate environmental damage.

“Eventually we want a positive impact on the environment, and we want to protect people from contaminants,” Selin says. “We should be able to see if all this effort to implement international agreements is working or not.”

In 2013, Selin was able to take her students to Geneva, Switzerland, to observe the final negotiating session of the Minamata Convention on Mercury, which invovled close to 140 countries.

“It was an amazing experience to share the international negotiations I had experienced as a student, with students at MIT,” Selin says. “It’s people getting together from everywhere in the world and hashing out the language, priorities, and legal rules for an agreement. How that process works is incredibly interesting: how you can get so many people into a room and have them agree on things. That process has so much importance for the global environment.”

The tenured engineers of 2017