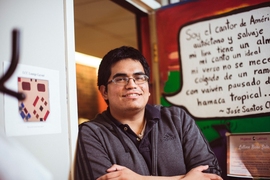 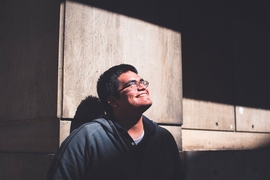 Raul Boquin, now an MIT senior, remembers the assignment from his freshman year as if it were yesterday. During a leadership workshop, he was asked to write a headline for a newspaper in his imagined future. The words that came to mind resonated so strongly that they now hang on the walls of his dorm room: “Equal opportunities in education for all.”

“I realized that I didn’t come to MIT because it was the best engineering school, but because it was the best place to discover what I was truly passionate about,” he says. “MIT pushed me to my limits and made me able to say ‘I don’t have to be the number one math person, or the number one computer science person, to make a difference’ with the passion I ended up having, which is education.”

Boquin, who is majoring in mathematics with computer science, predicts his life’s work will be to “find a way to adapt education to every person of the world who wants to learn something.”

More to education than teaching

Boquin’s first forays into education followed a relatively traditional path. As part of the undergraduate coursework he needed for his education concentration, he spent time observing teachers in local middle and high schools.

“But at the end of sophomore year, I realized that there was a lot more to education than just teaching.

The summer before his junior year, Boquin worked as a counselor and teaching assistant at Bridge to Enter Advanced Mathematics (BEAM). “It originally started as just a math camp for students in the summer, teaching them things like topology and number theory,” Boquin says. “These were seventh grade Hispanic and black children, and they loved it. And they were amazing at it.”

On a campus in upstate New York, Boquin taught classes by day and talked to students about his own work in mathematics by night. He also designed parts of the BEAM curriculum and came up with fun ways of teaching the lessons. “It was inspiring because it was like I wasn’t only a teacher, but I was a mentor and a friend,” he says.

Back at MIT, with the guidance of Eric Klopfer, professor and director of the Scheller Teacher Education Program and the Education Arcade, Boquin joined lead developer Paul Medlock-Walton to work on Gameblox, through MIT’s Undergraduate Research Opportunities Program (UROP).

Boquin describes Gameblox as a blocks programming language, in which users put blocks together to make something happen in the program. He worked on the user interface of the program, wrote tutorials for features, and built a framework for other researchers to test new code and features. His favorite part, though, was working on a Gameblox curriculum.

“I researched ways of finding out how teachers could use Gameblox to teach not only math and science, but also English, and history, and geography, and how to incorporate programming concepts in different levels of education,” Boquin says. “The features that I got to add to Gameblox as an engineer, I got to test, live, right afterward with teachers from Boston, or with students.”

“The inspirational thing was seeing what they liked and what they didn’t like, and still being able to practice those teaching things I had sophomore year,” says Boquin. “Then I would [adjust] my curriculum based on the feedback they had. And that’s when I realized that I really wanted to make a difference in educational research, whether through software or other types of engineering. I love the feeling of being able to mentor students.”

Boquin met many of the communities that he is part of today even before he decided to come to MIT. At Campus Preview Weekend (CPW), he met the QuestBridge student group community, a group made of QuestBridge Scholars and other low-income students.

As a sophomore, Boquin became the president of Latino Scientists and Engineers (formerly MAES, Mexican American Engineers and Scientists). The next year, he served as the treasurer for the Latino Cultural Center (LCC), and then became vice president as a senior.

“I really like implementing this type of programming that makes students feel empowered, that gives more opportunities to students, and just in general making students happy. I felt like one of the ways I could do that was as a leader in the LCC, as the vice president, to try to find leaders in sophomores, and freshman, and juniors,” he says. “It’s also about assigning other leadership roles.”

Boquin continues to develop curricula for different groups of students. This past fall, he became a teacher at CodeIt!, an MIT-student-run class that teaches coding to middle school girls.

The classes meet for eight sessions over eight weeks, and girls start by learning the basics of Scratch, another blocks-based programming language. They learn about loops, variables, data, and conditionals, all framed in projects such as games and animations. Next, the girls divide into groups to hone their skills on a project that they design — doing Scratch from scratch, Boquin says.

“I got to facilitate a class of 25 students, and lead six mentors, other undergraduates, to find the best way to [help the girls implement] their own individual ideas for projects,” says Boquin.

Boquin’s most recent teaching experience came on the other side of the world. Other than visiting his parent’s home country of Honduras, Boquin had never traveled internationally. This past Independent Activities Period, Boquin journeyed to South Korea with the MISTI Global Teaching Labs.

“The other hemisphere has a type of education that I have never experienced, like collective education versus individual and distinct [education]. That was something I wanted to experience and try out,” Boquin says.

The workshops in South Korea that Boquin helped host were MIT-style, project-based events, which involved “getting your hands dirty first, and then maybe learning about it after,” he says. “Something that blew me out of the water, too, was how much potential a student can have when you show them different perspectives — how much potential I can have, too, when they introduce me to new perspectives.”

Enhancing education from pre-K to MIT and beyond