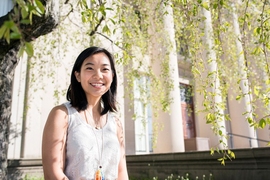 ↓ Download Image
Caption: “I realized I wanted to work on systemic changes in education,” Ruth Park says. “Currently education is supposed to be the one leveling ground between people of different economic statuses, and it's not doing that.
Credits: Image: Ian MacLellan 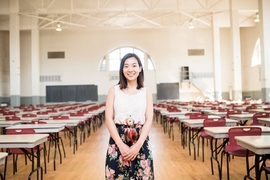 ↓ Download Image
Caption: “I realized I wanted to work on systemic changes in education,” Ruth Park says. “Currently education is supposed to be the one leveling ground between people of different economic statuses, and it's not doing that.
Credits: Image: Ian MacLellan

Caption:
“I realized I wanted to work on systemic changes in education,” Ruth Park says. “Currently education is supposed to be the one leveling ground between people of different economic statuses, and it's not doing that.
Credits:
Image: Ian MacLellan

The first education course Ruth Park took at MIT explored the history of U.S.’s education system, its complex, deep-rooted problems, and the many reforms that have backfired in some way. While many of her classmates were disheartened by what they learned, Park had a very different reaction.

“I found it really empowering,” she says. “Understanding the problem more in depth showed me where I might be able to make a difference and that this is something that really needs to be changed. This is one thing that can sustainably help people out of poverty.”

Much of Park’s interest in the education system stems from her own background. Park’s parents were volunteer circuit missionaries, which meant her family periodically moved to new communities and often struggled financially.  Park, who at times juggled three part-time jobs to help her family make ends meet, attended nine different schools between kindergarten and the end of high school.

“I think it was really cool to see a lot of different schools and experience a wide range of teaching and different school cultures,” says Park. “Especially because a lot of the schools I went to were in the more low-income areas.”

Park has always been an intrinsically motivated student, which helped her beat the odds and make it to MIT, but many of her friends were not as fortunate. In fact, it was watching her friends fail to overcome the many obstacles they faced that pushed her to think more deeply about the U.S. education system.

“A lot of my friends found school to be a chore, something that they were forced to go to,” she says. “So they didn't do well, which closed doors to options beyond low-skilled labor. And the thing is, I feel like that didn't have to happen — if school was engaging, it might have enabled them to break out of the poverty cycle they’re stuck in.”

When Park first arrived at MIT, she was set on becoming a doctor. However, during her junior year, as she began taking education courses and became increasingly involved in extracurriculars focused on education and outreach, things started to click. It became clear to her that she would find it most fulfilling to combine her own experiences with everything she was learning, to improve the lives of students all over the U.S.

“I realized I wanted to work on systemic changes in education,” she says. “Currently education is supposed to be the one leveling ground between people of different economic statuses, and it's not doing that. But it's definitely possible, and I feel that if I worked my entire life to make a change, and inspired other people along the way to continue to make changes, even if the actual change I ended up making was small, I would still be happy.”

At the beginning of her senior year, Park changed her major from biology to computational biology. Although it was a late change, she felt it made the best use of her time left at MIT.

“Computer science is a field that permeates all others,” she says. “And technology enables scalability, efficiency, and effectiveness — something education could use more of.”

Park immediately immersed herself in computer science courses and is currently working on an education-based research project through MIT’s SuperUROP program. The project centers on platforms for online courses, where students have been known to create multiple user accounts to help them cheat their way to better grades. Park’s work focuses on learning-gain differences among users based on their approach to the course material — not only whether they’re cheating or not, but how they’re cheating.

“If it's true that people using a certain method of cheating actually learn better, then maybe instead of punishing and discouraging students from this approach, the system itself should change to accommodate this kind of behavior,” she explains. “Because the whole point of this platform is to facilitate learning.”

Park appreciates the importance of this project, given that online courses are becoming more relevant and need to continue evolving to best serve their students. However, working with these online platforms also helped her further consider the challenges that students from low-income backgrounds face.

“It's easy to feel like if we just give low-income students more tools and more access to valuable resources, then things will get better,” she explains. “But honestly, coming from a low-income background, the biggest barrier I was constantly coming up against was just not thinking of it in the first place. I never thought to look for these kinds of tools and resources online, and I know I’m not alone.”

Park is also involved in MIT Design for America, an organization that uses design and engineering to create social impact. Park and her team spent her senior fall semester tackling the problem of gauging how well high school students understand the material being presented in class. Park and her team recognized that it is often hard for students to interrupt the teacher for clarification, so they wanted to find a better way. They designed a clicker that students could use to either indicate when they were confused while their teacher was talking, or specify their understanding of the material at designated check-in points.

However, the team soon realized that the clicker was largely ineffective, which revealed an even more fundamental issue.

“The thing is, students have to be actively engaged to be able to report whether they understand something,” Park says. “So gauging student understanding is dependent on a much larger problem, which is, how do you engage students?”

It is the same problem Park frequently encountered growing up in low-income areas, and one she hopes to someday address.

This semester, Park is leading a Design for America project aimed at improving mental wellness on campus. Again, Park’s passion for the project was born out of her own experiences. Her senior fall semester, overwhelmed by a demanding course load and other pressures, Park began isolating herself from her friends and was unable to recognize that things needed to change. Eventually she sought help and bounced back, but she wants to prevent other students from ending up in a similar situation.

She and her Design for America team are designing an online program called InTouch that will have smartphone application and browser-based forms. The program allows users to track their mood over time.

“The idea is that it helps you be more mindful of how you're feeling and be more in touch with yourself,” says Park. “And you can see trends. You can see how you're changing over time.”

Users share some of that information with close friends through the tool, raising awareness for the emotional states of friends and family in their close network and allowing them to easily reach out to seek or provide support as needed.

The final component of the program is a digital mailbox that collects notes of encouragement and gratitude from friends and family until the user is feeling down.

“You open it then, and then you're showered with a lot of encouragement, and you're reminded how much you're appreciated and loved,” explains Park. “The idea is that it will give you enough of a boost to reach out for help or make another plan of action to address whatever is bringing you down.”

The project is a work in progress, but Park hopes it can help college students lead happier and healthier lives, first at MIT and then beyond.

Park is currently taking some extra time to finish her degree at MIT, and this summer she will utilize her computer science skills during an internship at Athena Health, a company that works on digital tools to improve health care services.

Park isn’t sure exactly where her passion for educational reform will take her after graduation, but she is excited about the many possibilities that exist, and carries with her a determination to make a difference no matter what route she takes.

“Being at MIT, surrounded by other high-achieving people with big dreams, made me realize that just because there are tragedies in the world that have been there for generations doesn't mean it can't change, and doesn't mean that I can't be the one to help make that change,” she says. “It needs to be people like us who have access to opportunities, that make these changes because we're the ones who can.”

Evidence-based teaching is alive and well at MIT