Evidence-based teaching is alive and well at MIT

At the MacVicar Day symposium on March 11, Catherine Drennan shared a conundrum she encountered in her first job as a high school chemistry teacher: Her students didn’t seem to grasp how the chemical principles they were learning in the classroom could be applied in the real world.

Drennan, who is now a professor of chemistry and biology at MIT, recalled a lab exercise her students performed, which is standard fare in high school introductory chemistry. It’s an acid/base titration to measure the acid strength, or pKa, of a weak acid. “I feel like students [were] wondering, ‘Is this a big problem that somehow hasn’t been [solved]?’ [As if there are] these warehouses of weak acids, and if only there were more trained chemists then we would be able to do something with it.”

Moreover, it was clear to Drennan that her students couldn’t imagine becoming chemists themselves. “I showed them pictures of chemists,” she said wryly, displaying a slide with the likenesses of Amedeo Avogadro (1776-1856), John Dalton (1776-1844), and Robert Boyle (1627-1691). “So I’m not really sure why they couldn’t see themselves as chemists.”

After joining the MIT faculty, Drennan was surprised to find that undergrads in 5.111 (Principles of Chemical Science) struggled with the same issues. She decided to address the problem by creating a series of 2-to-5-minute videos to use in her classes. The videos connect basic chemical principles with real-world applications, such as detecting landmines, fighting cancer, and developing biofuels. More importantly, they feature MIT students doing research in these areas. “[The videos] show the different faces of chemistry,” she said, “so students weren’t just seeing these pictures of dead chemists.”

Drennan’s solution was one of many innovative tools and practices shared by the panelists during the symposium, “From Hand to Mind: Advances in Evidence-based Teaching.” The event was part of MacVicar Day, an annual celebration of excellence in undergraduate teaching. At the beginning of the program, Dean for Undergraduate Education Dennis Freeman recognized the 2016 MacVicar Faculty Fellows, who were named earlier in the week. 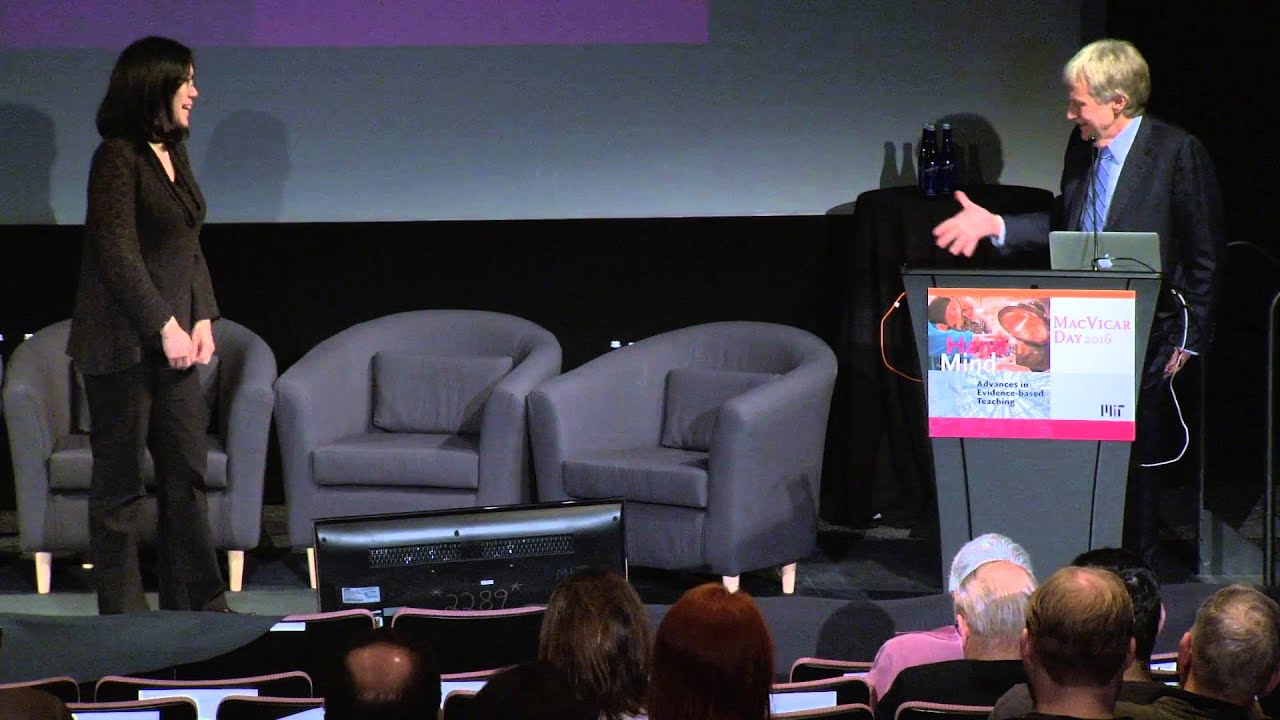 Play video
Introduction and celebration of the 2016 MacVicar Fellows followed by a symposium moderated by Dennis Freeman, MIT's dean for undergraduate education, focused on the implementation of evidence-based practices and tools to support student learning: from active learning to project-based subjects to blended learning to making.

Not your average videos

The videos Drennan uses in her classes have had a measurable impact on her students. After screening a video in class, she uses a clicker question to test their understanding of a concept, such as pKa. Students have performed well in answering these questions, she said. Drennan also partnered with the Teaching and Learning Laboratory to evaluate whether incorporating the six videos during the semester increased students’ motivation. Using three semesters of data gathered through a combination of surveys and interviews, they created an impact scale from 1 to 7, like subject evaluations. Students did show gains: Women increased from 3.8 to 5.1, and men increased from 4.2 to 4.9.

Comments from the student interviews also provided valuable insights into the videos’ impact on their motivation. Drennan shared one of her favorites: “[They] kept me engaged — me, a man who once swore I would never be engaged.”

Darmofal also incorporates videos into his courses to enhance students’ understanding of the material. In a twist on a typical flipped classroom model (in which students might view videos of lectures as homework), he has created about 200 videos of him working problems. “I felt this would help students the most — working many, many problems,” he said. Darmofal observed that the combination of viewing videos and reading the text helps students come to class better prepared.

Some speakers have developed software to help facilitate learning. For his 21M.051 (Fundamentals of Music) course, Cuthbert created a learning management program called Artusi. “A lot of music fundamentals is creative,” he explained, like composing or improvising. But in order to get to that point, students must understand the basic building blocks of music, like being able to write an E-flat major scale.

Artusi provides critical reinforcement students need outside of class to develop an ear for music and learn music theory. A typical exercise might be tapping a melody in time to a recording, or identifying if a chord is in a major or minor key. Students listen, answer, and find out immediately whether they are right or wrong.

The feedback Artusi provides is invaluable, Cuthbert said. “We have an enormous database of every single correct answer, incorrect answer, what the student guessed first, how did they eventually get to the right answer.” These data allow Cuthbert and his colleagues to “adjust future classes, and then ultimately, using all these things, not spend less time teaching, but spend more of our teaching time doing the creative things that we as professionals are able to do, but that the computer can’t.”

Culpepper describeed a new app he and a team of five colleagues developed, called Mobius, which helps students find and access maker spaces on campus. Released on March 16, the app is part of a larger initiative Culpepper leads called Project Manus.

“We all know that experience matters,” said Culpepper, who is known as MIT’s Maker Czar. “This is why we have over 130,000 square feet of design and build space at MIT.” The problem, he explained, is that there are many barriers to using the spaces, like students’ awareness of what’s available, whether they need permission or training, the hours of operation, and costs.

Culpepper’s team surveyed students and cataloged over 40 maker spaces on campus in three categories: machine shops, student-run community spaces, and class project spaces. “Last week, I found three shops on campus that I never knew existed — and I’ve been here since 1997 as a student,” Culpepper said.

With Mobius, students can search for spaces that meet their needs, such as a shop with a 3-D printer. The app addresses the barriers Culpepper’s team identified and provides a wealth of information about each space — right down to the the manufacturer’s technical specifications for machines.

The next version of Mobius will have increased functionality and incorporate additional information. For example, students who are unfamiliar with a particular machine will be able to access videos about how it works and watch parts being made.

Bringing active learning to the fore

Finding ways to engage students was a common theme among the panelists. “Lecture and lecturer are the L words in my classes. I try to eliminate them entirely from my vocabulary,” Miller said. Instead, he prefers to describe his software engineering and user interface design classes as places where students gather and work on problems together. “In fact, I’m just helping everybody learn. But I’m definitely not lecturing,” Miller said.

He uses a flipped classroom model, with recorded lectures and textbook reading as homework. But Miller emphasized that the homework has to be active. To accomplish this, he custom-built Web pages that combine textbook material with embedded exercises. Every day, he gives students a quick quiz at the beginning of class. “There’s lots of evidence from learning science that frequent, short quizzes are a good thing,” he said.

Miller also includes clicker questions in his classes, using a software app he developed. But he noted that there are many commercial apps available, or instructors can just ask students to raise their hands. Whatever the medium, Miller believes that the commitment students make in their own heads through clicker questions is an important part of learning.

Darmofal is also a firm believer in using homework exercises that engage students, to supplement the textbook. He began using them in his aerodynamics course. In the late 1990s, he and his colleagues began tinkering with the class, because students seemed to be struggling to understand and synthesize concepts that engineers in that field need to master.

They flipped the classroom, incorporated project-based learning, and only gave short reading assignments, but the changes had little impact. The following year, they tried another tactic: “intense homeworks that made [students] engage, so they come to class prepared with the vocabulary they need to understand the lecture.”

It worked. “That made all the difference of the world,” Darmofal said. “We had outcomes that showed tremendous improvement in learning, [and] the subject evaluations actually improved.”

There was general agreement among the speakers that modifying their approach and practices in the classroom is not always smooth sailing; sometimes there is student push-back.

“MIT students excel at the traditional system and are nervous about anything different,” said Rankin. “Anything you can do to ease them into it helps. We can’t just pretend that if we’re happy or cheery and march along, they’ll follow us.”

Making changes can be as simple as finding ways to ensure students read the textbook. Both Miller and Darmofal realized that students weren’t doing the homework reading assignments. But once they made students more accountable — whether through homework exercises, quizzes, or clicker questions — students started reading the textbook. “We don’t see that problem anymore,” Miller said. “They have to get into the habit of it, and we just have to change the mindset.”

Culpepper takes accountability even further. His project design class is structured so that students must take ownership of their own learning. The first half of the course is lecture-based. During the second half, students are expected to learn from the textbook and come to office hours with questions. “That’s done on purpose because when they leave here and they get a job, we can’t teach them everything. They have to learn to learn by themselves.” Students may balk at first, but they eventually come around, he said.

Even small changes in the classroom can be powerful, Drennan said. “Six videos, two to three minutes each over the course of an entire semester, had an enormous impact in the student’s interest in learning the material. So you don’t have to redo everything … just do something small. Even that can make an enormous difference.”

At the end of the day the real question, Darmofal said, is what is effective pedagogy? “In my mind, it’s using the right tools for what the situation calls for.”

And that’s exactly what he, Culpepper, Cuthbert, Drennan, and Miller are doing.