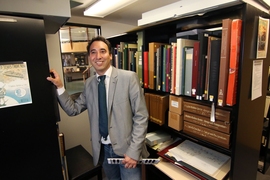 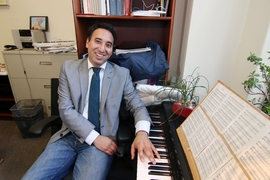 One of the most successful composers of late 14th-century Italy was an unusual figure named Zachara da Teramo. A secretary to popes, despite being described as having no more than 10 fingers and toes combined, Zachara also wrote songs — including an ode to Pluto, god of the underworld, of all things.

“Here was this person who was the pope’s official scribe, who could barely hold a quill, and he was the most beautiful copyist, and must have encountered all this beautiful music,” says MIT’s Michael Cuthbert. “All these different influences just come together in his music.”

In recent years Cuthbert, an associate professor of music, has taken a deep dive into the compositions of Zachara and his 14th- and early 15th-century contemporaries, using the ear of a highly trained scholar and the data-analysis of a scientist. In a book he is preparing, titled “Ars Mutandi” — meaning, “The Changing Style” — Cuthbert performs detailed analysis of once-prominent figures like Zachara who would otherwise be lost to the public today.

“The best work by a second- or third-tier composer is always going to be more interesting to me than the worst work by a master,” Cuthbert says. “Not always the best, but the most interesting, the strangest, the thing that challenges my previous conception of what the best was.”

Italy in Zachara’s time, Cuthbert says, was a place of musical ferment and change, with sacred and secular styles blending and evolving. Using statistical approaches taken from population biology, Cuthbert has crunched some numbers and come to a somewhat controversial conclusion in his field: We know much more about 14th-century Italian music than we thought. That is, the surviving scores we have do not represent just a tiny proportion of the music that was written at the time, but rather comprise a healthy fraction of all compositions.

“Everybody in my field believed we have the smallest tip of what’s out there — maybe 99 percent was lost,” Cuthbert says. “It looks to me that somewhere between one-third and two-thirds survived. We have a large proportion of what was once written down in the 14th century that we can study today.”

That conclusion, published in a recent paper, gave Cuthbert the confidence to write his book surveying the century.

“Before, it was thought we really couldn’t say anything about the music of the time as an aggregate, because what we had was so small and unrepresentative,” Cuthbert observes. “Now if what we have is half of the music, and the most popular, we can really begin to say things about what kinds of gestures, what kinds of harmonies, were used often and how they changed over time, and what were the changes that took place, where they happened.”

For this combination of deep qualitative understanding of historical composition and innovative quantitative work, Cuthbert was granted tenure at MIT earlier this year. Still, his path to the Institute could not have been foreseen when he was a youngster.

Cuthbert grew up in Escondido, Calif., north of San Diego, where he was a baseball fan — and not particularly attuned to music until his teens.

“I’m in music because my junior high school had a good marching band, and I was uncoordinated and couldn’t walk straight, and my mom thought joining marching band would be a good thing for me,” Cuthbert says. “My brother is a more naturally gifted musical mind and ear, so I followed in his footsteps, literally, in marching band.”

Fairly quickly, Cuthbert says, he figured out the possibilities for infinite exploration that music presents, with the help of “amazing [band] directors … who really were willing to push” him to excel.

“Music was one thing that was placed in front of me where I knew immediately I could work my whole life on playing the Brahms clarinet sonata better, or more beautifully, more interestingly,” he says. “And then I could just keep moving on to new pieces. So music was very attractive to me that way. And I got into composing.”

Cuthbert attended Harvard University as an undergraduate, developing a taste for unusual contemporary compositions. A professor there, Thomas Forrest Kelly, helped interest Cuthbert in older periods of composition. “Kelly said, ‘You like all this weird stuff, come back to the 10th century, the 12th century, and we’ll show you a time when music [seems] really new and strange for us today.’ And he was absolutely right. It completely hooked me.”

Meanwhile, Cuthbert also developed a talent for computer programming: While working his way through graduate school at Harvard, he worked as a programmer for the National Bureau of Economic Research in Cambridge (which is now headed by MIT economist James Poterba).

“That whole research center really influenced how I think about things,” Cuthbert says. “I realized I could really combine these interests, [music and] the quantitative way of looking at things.”

Cuthbert’s interest in programming has led him to develop a host of educational and coding tools for other music scholars and teachers, as part of a program called music21. The idea is to build an open-source toolkit with a variety of applications. Late this summer, Cuthbert was putting in 50 hours a week, by his own estimate, programming tools for his classes.

The quantitative approach, Cuthbert says, is simply borne of his desire to know more about music history. Take the question of how much 14th-century music survives. Suppose we only have page 68 of a particular manuscript of music; it might appear that we have lost all of the compositions in the manuscript to that point. But suppose many musical compositions reappear, from manuscript to manuscript — as they did in the 14th century. The first 68 pages of our manuscript might well not be filled with unique music lost to history; they could have had copies of well-known songs. Cuthbert’s calculations flesh out that logic with the existing statistics.

“I hope somebody will carefully go through my data,” Cuthbert says. For musicologists with no training in population biology, he acknowledges, “It does begin to look a little like black magic. You have to buy that the programming is right and the equations are correct.”

But the approach has had traction with Cuthbert’s students, who have begun doing quantitative analyses of things like the distribution of notes written by Beethoven before and after he went deaf, in an attempt to analyze the effects of the great composer’s hearing loss on his music.

Cuthbert recognizes that such studies are not to everyone’s taste — but views them as being complementary to the kind of analysis of a composition that comes from rigorous, in-depth training and scholarly appreciation of music.

“I don’t want ever to come across as saying I want to use data and computers and statistics to take away any of the beautiful mystery of music,” Cuthbert reflects. “For me it just opens up new ways of appreciating and understanding and hearing things I wasn’t hearing before.”