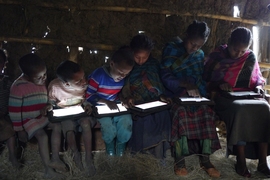 ↓ Download Image
Caption: "The whole premise of our project is to harness the best science and innovation to bring education to the world’s most underresourced children," Cynthia Breazeal says. Pictured are students in Ethiopia.
Credits: Courtesy of CuriousLearning.org 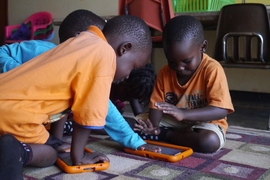 ↓ Download Image
Caption: "When we do these deployments, we purposely don’t tell the kids how to use the tablets or instruct them about any of the content," Breazeal says. "Our argument is, if you’re going to be able to scale this to reach 100 million kids, you can’t bring people in to coach kids what to do." Pictured are students in Uganda.
Credits: Courtesy of CuriousLearning.org

Caption:
"The whole premise of our project is to harness the best science and innovation to bring education to the world’s most underresourced children," Cynthia Breazeal says. Pictured are students in Ethiopia.
Credits:
Courtesy of CuriousLearning.org

Caption:
"When we do these deployments, we purposely don’t tell the kids how to use the tablets or instruct them about any of the content," Breazeal says. "Our argument is, if you’re going to be able to scale this to reach 100 million kids, you can’t bring people in to coach kids what to do." Pictured are students in Uganda.
Credits:
Courtesy of CuriousLearning.org

For the past four years, researchers at MIT, Tufts University, and Georgia State University have been conducting a study to determine whether tablet computers loaded with literacy applications could improve the reading preparedness of young children living in economically disadvantaged communities.

At the Association for Computing Machinery’s Learning at Scale conference this week, they presented the results of the first three deployments of their system. In all three cases, study participants’ performance on standardized tests of reading preparedness indicated that the tablet use was effective.

In the African deployments, students who used the tablets fared much better on the tests than those who didn’t, and in the U.S. deployment, the students’ scores improved dramatically after four months of using the tablets. "The whole premise of our project is to harness the best science and innovation to bring education to the world’s most underresourced children," says Cynthia Breazeal, an associate professor of media arts and sciences at MIT and first author on the new paper. "There’s a lot of innovation happening if you happen to be reasonably affluent — meaning you have regular access to an Internet-connected computer or mobile device, so you can get online and access Khan Academy. There’s a lot of innovation happening if you’re around eight years old and can type and move a mouse around. But there’s relatively little innovation happening with the early-childhood-learning age group, and there’s a ton of science saying that that’s where you get tremendous bang for your buck. You’ve got to intervene as early as possible."

Breazeal is joined on the paper by Maryanne Wolf and Stephanie Gottwald, who are, respectively, the director and assistant director of the Center for Reading and Language Research at Tufts; Tinsley Galyean, a research affiliate at the MIT Media Lab and executive director of Curious Learning, a nonprofit organization the researchers created to develop and deploy their system; and Robin Morris, a professor of psychology at Georgia State University.

The concentration on early literacy reflects Wolf’s theory, popularized in her book "Proust and the Squid," that the capacity to read, unlike the capacity to process spoken language, is not hard-coded into our genes. Consequently, early training is essential to establishing the neurological machinery on which the very capacity for literacy depends.

The researchers’ system consists of an inexpensive tablet computer using Google’s Android operating system. Wolf and Gottwald combed through the literacy and early-childhood apps available for Android devices to identify several hundred that met their quality criteria and addressed a broad enough range of skills to lay a foundation for early reading education. The researchers also developed their own interface for the tablets, which grants users access only to approved educational apps. Across the three deployments, the tablets were issued to children ranging in age from 4 to 11.

"When we do these deployments, we purposely don’t tell the kids how to use the tablets or instruct them about any of the content,dz Breazeal says. DzOur argument is, if you’re going to be able to scale this to reach 100 million kids, you can’t bring people in to coach kids what to do. You just make the tablets available, and they need to figure everything out from then on out. And what we find is, the kids do it. When we first did Ethiopia, we had all these protocols and subprotocols. What if it’s a week and they haven’t turned them on? What if it’s three weeks and they haven’t turned them on? Within minutes, the kids turn them on. By the end of the day, they’ve literally explored every app on the tablet."

The Ethiopian trial, which the researchers conducted in collaboration with the One Laptop per Child program, involved children aged 4 to 11 who had no prior exposure to spoken English or any written language. After a year using the tablets, children were tested on their understanding of roughly 20 spoken English words, taken at random from apps loaded on the tablets. More than half of the students knew at least half the words, and all the students knew at least four.

When presented with strings of Roman letters in a random order, 90 percent could identify at least 10 of them, and all the children could supply the sounds corresponding to at least two of them. Perhaps most important, 35 percent of the children could recognize at least one English word by sight. These figures roughly accord with those of children entering kindergarten in the U.S.

In the South African trial, rising second graders who had been issued tablets the year before were able to sound out four times as many words as those who hadn’t, and in the U.S. trial, which involved only 4-year-olds and lasted only four months, half-day preschool students were able to supply the sounds corresponding to nearly six times as many letters as they had been before the trial.

Since the trials reported in the new paper, Curious Learning has launched new trials in Uganda, Bangladesh, India, and the U.S. In all, 2,000 children have had the opportunity to use the tablets.

Currently, the team is concentrating on analyzing data collected from the trials. Which apps do the children spend most time with? Which apps’ use correlates best with literacy outcomes? Curious Learning is also looking for partners to help launch larger pilot programs, with 5,000 to 10,000 children.

"There’s a core scientific question, which is understanding what the nature of this child-driven, curiosity-driven learning looks like," Breazeal says. "We need to understand how they learn, which is a fundamentally social process, where they explore the tablet together, they discover things through that exploration, and then they talk-talk-talk-talk, and they share those ideas. So it’s a profoundly social, peer-to-peer-based learning process. We have to have create a technology and an experience that supports that process."

The “One Laptop Per Child” project, originated in the Media Lab, was the subject of a study that revealed the importance of having a laptop in the home for “access to information, educational games, and tools for self-expression.” In an op-ed for Mashable, Sandra Nogry calls on educators to encourage the use of technology for learning in developing countries.

In the World: Cultivating creativity