A block-shaped robot that seems to roll onto a computer screen is part of an educational-media system that gets kids out of their chairs.
Larry Hardesty, MIT News Office
Publication Date:
Press Inquiries 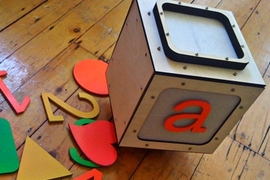 ↓ Download Image
Caption: The Alphabot, a prototype robot that appears to move seamlessly between the real world and an on-screen virtual world, is designed to resemble a child's alphabet block.
Credits: Photo: David Robert

Caption:
The Alphabot, a prototype robot that appears to move seamlessly between the real world and an on-screen virtual world, is designed to resemble a child's alphabet block.
Credits:
Photo: David Robert

Caption:
In the prototype of the Media Lab's Playtime Computing environment, the Alphabot disappears into a hutch covered by robotic foliage and appears to continue moving along a path in a virtual world.
Credits:
Photo: Andy Ryan
For all the work that’s gone into developing educational media, even the most stimulating TV shows and video games leave kids stationary. Researchers at the MIT Media Lab are hoping to change that with a system called Playtime Computing, which gives new meaning to the term “computing environment.”

The prototype of the Playtime Computing system consists mainly of three door-high panels with projectors behind them; a set of ceiling-mounted projectors that cast images onto the floor; and a cube-shaped, remote-controlled robot, called the Alphabot, with infrared emitters at its corners that are tracked by cameras mounted on the ceiling.

But the system is designed to make the distinctions between its technical components disappear. The three panels together offer a window on a virtual world that, courtesy of the overhead projectors, appears to spill into the space in front of it. And most remarkably, when the Alphabot heads toward the screen, it slips into a box, some robotic foliage closes behind it, and it seems to simply continue rolling, at the same speed, up the side of a virtual hill.

“We kind of see it as one reality,” says Adam Setapen, a graduate student in Professor Cynthia Breazeal’s Personal Robotics Group, who helped design the system. “One of the things we’re really excited about is having two of these spaces, one here and maybe one in Japan, and when the robot goes into the virtual word here, it comes out of the virtual world in Japan. So that kind of fits in with that one-reality concept, that there’s one robot, and whether it’s physical or virtual is based on the state of the robot in the Playtime Computing system.”

According to David Robert, another graduate student who worked on the project, the purpose of the system is to give children between the ages of 4 and 6 an opportunity for what developmental psychologists call “imaginative play”: early experimentation with symbolic reasoning and social roles that’s crucial to cognitive development. And, Setapen adds, the researchers also want to get kids out of their chairs.

“We like the idea of this big space that they can run around in, and be active, and be kids,” Setapen says, “because that’s a big part of how they learn, by moving around and interacting with each other.” “Childhood obesity is a serious problem,” Robert adds. “Michelle Obama has this whole campaign called Let’s Move to promote more-active play.”

Setapen, Robert and their fellow grad student Natalie Freed built a set of wooden symbols that can be attached to the face of the Alphabot — so named because it resembles a giant alphabet block. Each symbol contains an RFID tag, and inside the Alphabot is a tag reader. If a child changes the symbol on the Alphabot, the Alphabot’s face changes its color to match that of the symbol. And if the robot then rolls onto the screen, the virtual Alphabot displays the new symbol, too.

Among the symbols are letters of the Roman alphabet, Japanese characters, a heart and a pair of musical notes. When children attach the notes to the Alphabot, music begins to play from the system’s speakers, illustrating the principle that symbolic reasoning can cut across sensory modalities.

Another, vital element of the system is what the researchers call the Creation Station, a tabletop computer on which children can arrange existing objects or draw their own pictures. Whatever’s on the tabletop can be displayed by the projectors, giving children direct control over their environment. “You could have one kid drawing spiders,” says David, “while his brother’s running around stomping them.”

“We’re just on the cusp of rediscovering how vital and central play really is to learning,” says Joe Blatt, director of the Harvard Graduate School of Education’s Technology, Innovation and Education program and a long-time producer of educational television and video games for children. “One of the things that make play so important for children’s development and learning is that it’s an opportunity to be generative, to be creative, rather than just to receive.” That applies to early experiences with information technology, too, Blatt says. “It’s very important for kids to learn from as early as possible a stage that what’s on the other side of the screen, what’s driven by computer technology, should not be seen as something that’s just there, or just provided by others, or that’s to be taken as a given, but rather that you can have the same effects on it that you could in creating something from a box of blocks.”

To make the Playtime Computing system even more interactive, the researchers have outfitted baseball caps with infrared light emitters, so that the same system that tracks the Alphabot could also track playing children. That would make it possible for on-screen characters — or a future, autonomous version of the Alphabot — to engage directly with the children. The researchers are eager, however, to begin experimenting with the new Microsoft Kinect, a gaming system that, unlike the Nintendo Wii, uses cameras rather than sensor-studded controllers to track gamers’ gestures. Kinect could offer an affordable means of tracking motion in the Playtime Computing environment, without requiring kids to wear hats.

The prototype of the Alphabot, the researchers say, uses a few hundred dollars’ worth of off-the-shelf parts, and if the robot were mass-produced, its price would obviously fall. The researchers believe that simple, affordable versions of the Playtime Computing system could be designed for home use, while more elaborate versions, with multiple, multifunctional robots, could be used in the classroom or at museums.

In a few informal experiments, the researchers have begun to collect data about how children actually use the system. Several children immediately began cramming multiple symbols onto the Alphabot’s face, something it isn’t yet equipped to handle. Others inserted objects other than the Alphabot into the box that serves as an interface between the real and virtual worlds, expecting that they, too, would appear on screen. “We’re looking into letting the aspects that move between the physical and the virtual world be a lot different, because that seems to be what the kids really love,” Setapen says. “We would love it if the kid could take their favorite toy and put it in the hutch, and then a digital model of the toy appears on the screen. It doesn’t get that much better for kids.”