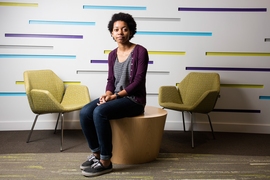 ↓ Download Image
Caption: “MIT has given me more opportunities than I could have imagined as a prefrosh,” Senior Elizabeth Rider says. “I've traveled to new places and met new people that I wouldn't otherwise have had the opportunity to.” 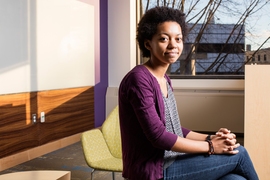 ↓ Download Image
Caption: Rider is planning her next steps — either as an atmospheric scientist, environmental lawyer, or environmental policy maker. Either way, she will work for the environment. “It just feels very good to have my work mean something in people’s lives,” Rider says.

Caption:
“MIT has given me more opportunities than I could have imagined as a prefrosh,” Senior Elizabeth Rider says. “I've traveled to new places and met new people that I wouldn't otherwise have had the opportunity to.”

Caption:
Rider is planning her next steps — either as an atmospheric scientist, environmental lawyer, or environmental policy maker. Either way, she will work for the environment. “It just feels very good to have my work mean something in people’s lives,” Rider says.

Elizabeth Rider didn’t think much about college until she got a laptop. Then she discovered blogs and Tumblr accounts of other ambitious high school students who were applying to competitive schools, and she found the MIT Admissions blog. The websites gave her a better idea of what she was seeking for the next chapter of her life.

“I grew up in Williamsport, Pennsylvania, and I just sort of wanted to go somewhere else. To a bigger city, [with] more diverse people, more opportunities to learn, or to apply myself. In high school I was scrambling for opportunities and things to latch on to,” says Rider, now an MIT senior.

After participating in the Minority Introduction to Science and Engineering (MITES) summer program as a high school junior, Rider was determined to come back to MIT. As an undergraduate, she has found a number of meaningful activities to participate in, in areas ranging from environmental research, to student life, to studying abroad.

“MIT has given me more opportunities than I could have imagined as a prefrosh,” she says. “I've traveled to new places and met new people that I wouldn't otherwise have had the opportunity to. In high school, MIT was a destination, but really, I think MIT is more like a launchpad to take you wherever you want to go, to do whatever you want to do. There are people here who can point you in the right direction or show you a whole new path that you'd never thought of before.”

Rider traveled to Germany with the MIT International Science and Technology Initiatives (MISTI) nearly every year she was at MIT. It started with a German class in Berlin during Independent Activities Period; the next year, she participated in the Global Teaching Labs near Lubeck.

By the time she went back to Germany for the third time, Rider was focused on atmospheric chemistry research. As a sophomore, she had completed an Undergraduate Research Opportunity Program (UROP) project in the lab of Associate Professor Daniel Cziczo. “He is one of the more active professors in environmental policy, at least in EAPS [the Department of Earth, Atmosphere and Planetary Sciences]. Science and science policy are something that he is interested in, and he encourages it in his grad students. That was sort of what got me onto the atmospheric chemistry research,” says Rider, who is an EAPS major.

Last summer, Rider joined the lab of Harmut Hermann at the Leibniz Institute for Tropospheric Research.

During her summer in Leipzig, Rider worked with organic aerosols, characterizing humic-like substances, or HULIS, which are thought to come from biomass burning, among other sources.

Rider also tried to understand how HULIS travels using path-trajectory models, which compared global weather forecasts and data collected from various air filters. By looking at the size distribution and the chemical makeup of HULIS particles, the group tries to find trends in where HULIS particles are coming from, and what types of events trigger HULIS outbreaks.

“Now I am looking at concentration readings, and trying to find how chemical transport models relate to our observation systems in the U.S. There are a few different systems that monitor air quality,” she says of her thesis research, which she has conducted in the lab of Associate Professor Noelle Selin.

From there, Rider wants to see if certain observation systems might be better for monitoring certain substances, such as ozone or particulate matter. She says that often observation systems in rural areas are used to make decisions about people’s exposures in big cities — and readings in rural areas are usually lower. “Often times models are being used to influence decision making, but if the models aren’t accurate and aren’t reflecting what is in the observation, then maybe you shouldn’t make those decisions that way,” explains Rider. “You need to adjust for that.”

Rider is planning her next steps — either as an atmospheric scientist, environmental lawyer, or environmental policy maker. Either way, she will work for the environment. “It just feels very good to have my work mean something in people’s lives,” she says.

Spending time in different parts of Germany over the course of several years, Rider exposed herself to different perspectives on the growing refugee crisis and on American politics. “I saw increasing tension around the refugee crisis during my stays in Germany. After Angela Merkel announced the goal of accepting 1 million refugees, there was more news surrounding Muslims and refugees. After the attacks in Cologne that was even more so, with the German nationalist group PEGIDA gaining a larger following and their protests gaining more air time on the news,” Rider says.

She watched as even her liberal host mother in Lubeck struggled with cultural misunderstandings when she tried to reach out and work with refugee women. “The U.S. has its own fears about Islam, and my mom’s an immigrant [from Cameroon]; all these things are very interesting to see. And [it was interesting] for me to feel like a foreigner as well, as an American,” says Rider.

Even before living in Germany, Rider wrote about her identity and experience. “Before MIT I had just never written unless it was assigned or I had to. But, I think when you are given a platform you realize that you have a lot to say, and with the confidence of saying it, you can really make connections,” Rider says. She started by writing essays, “and tried fiction for a while, and finally decided that I prefer nonfiction.” A writing minor, she hopes to publish some of her pieces this spring.

“I decided that [writing] was very valuable and productive, not only as an environmentalist —being able to convey scientific ideas simply so that people will understand and care as much as you do — but just as a human experience. Just describing what it feels like to be a bisexual, black woman from a very white place, and to be of a mixed-race relationship, to have diverse parents. Those were all things I wanted to grapple with, and try to better define, try to talk about, in my writing.”

For Rider, a surprising aspect of student life in Germany was the lack of community on campus. “There is no sense of college experience. You go do work, and then you are done. There is no sort of dorm life, or dorm culture, things like that,” she says, “I missed dorm life at MIT.”

Rider has been involved with improving dorm life at MIT since her first year. One Friday night freshman year, Rider was sitting in her room, wondering what to do. A friend texted asking if she wanted to go to Spooky Skate, a costumed-ice skating event hosted by SaveTFP. SaveTFP is a student group advised by the Community Development and Substance Abuse Center that organizes social events to reduce student stress levels and raise health awareness. The group’s name draws on a common MIT acronym, IHTFP.

Soon after, Rider joined SaveTFP, helping to coordinate the group’s weekly Friday night events, and she has continued as an active member throughout her senior year.

“Basically, we want to bring positive energy to the student body, sort of like we're saving them from the firehose — our events are a place where people can relax, de-stress, eat, and hang out,” Rider says.

Students can drop by to relax after finishing problem sets, or grab a bite to eat before heading out to a party. “When I joined it was like sort of looking for a way to give back to MIT students, and meet new people, and create communities. I feel like it has done all those things,” she says.