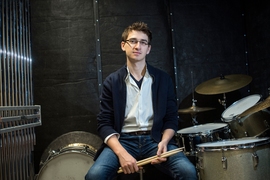 ↓ Download Image
Caption: “Part of my enjoyment comes from building things with [my] hands and being able to actually work in the physical world, and by studying mechanical engineering you get an invaluable understanding of how the physical world works,” senior Garrett Parrish says. 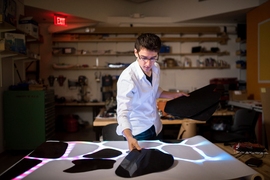 ↓ Download Image
Caption: “The whole goal of my life is to fix all the people problems. I sincerely think that the biggest problems we have are how we deal with each other, and how we treat each other. [We need to be] promoting empathy and understanding, and technology is an enormous power to influence that in a good way,” senior Garrett Parrish says.

Caption:
“Part of my enjoyment comes from building things with [my] hands and being able to actually work in the physical world, and by studying mechanical engineering you get an invaluable understanding of how the physical world works,” senior Garrett Parrish says.
Credits:
Photo: Ian MacLellan

Caption:
“The whole goal of my life is to fix all the people problems. I sincerely think that the biggest problems we have are how we deal with each other, and how we treat each other. [We need to be] promoting empathy and understanding, and technology is an enormous power to influence that in a good way,” senior Garrett Parrish says.
Credits:
Photo: Ian MacLellan

Garrett Parrish grew up singing and dancing as a theater kid, influenced by his older siblings, one of whom is an actor and the other a stage manager. But by the time he reached high school, Parrish had branched out significantly, drumming in his school’s jazz ensemble and helping to build a state-championship-winning robot.

MIT was the first place Parrish felt he was able to work meaningfully at the nexus of art and technology. “Being a part of the MIT culture, and having the resources that are available here, are what really what opened my mind to that intersection,” the MIT senior says. “That’s always been my goal from the beginning: to be as emotionally educated as I am technically educated.”

Parrish, who is majoring in mechanical engineering, has collaborated on a dizzying array of projects ranging from app-building, to assistant directing, to collaborating on a robotic opera. Driving his work is an interest in shaping technology to serve others.

“The whole goal of my life is to fix all the people problems. I sincerely think that the biggest problems we have are how we deal with each other, and how we treat each other. [We need to be] promoting empathy and understanding, and technology is an enormous power to influence that in a good way,” he says.

Parrish began his academic career at Harvard University and transferred to MIT after his first year. Frustrated at how little power individuals often have in society, Parrish joined DoneGood co-founders Scott Jacobsen and Cullen Schwartz, and became the startup’s chief technology officer his sophomore year. “We kind of distilled our frustrations about the way things are into, ‘How do you actionably use people’s existing power to create real change?’” Parrish says.

The DoneGood app and Chrome extension help consumers find businesses that share their priorities and values, such as paying a living wage, or using organic ingredients. The extension monitors a user’s online shopping and recommends alternatives. The mobile app offers a directory of local options and national brands that users can filter according to their values. “The two things that everyday people have at their disposal to create change is how they spend their time and how they spend their money. We direct money away from brands that aren’t sustainable, therefore creating an actionable incentive for them to become more sustainable,” Parrish says.

DoneGood has raised its first round of funding, and became a finalist in the MIT $100K Entrepreneurship Competition last May. The company now has five full-time employees, and Parrish continues to work as CTO part-time. “It’s been a really amazing experience to be in such an important leadership role. And to take something from the ground up, and really figure out what is the best way to actually create the change you want,” Parrish says. “Where technology meets cultural influence is very interesting, and it’s a space that requires a lot of responsibility and perspective.”

Parrish also loves building physical objects, and his mechanical engineering major has provided a path to many of his creative projects. “Part of my enjoyment comes from building things with [my] hands and being able to actually work in the physical world, and by studying mechanical engineering you get an invaluable understanding of how the physical world works,” he says. “I also believe strongly in the powers of computers to do things, so combining the two of [these areas] — basically programming mechanical things — is where I think I can get the most enjoyment.”

Even before he joined MIT, Parrish was part of the Opera of the Future Group at the Media Lab. As a freshman, he worked on the “Death and the Powers” global interactive simulcast, performed at the Dallas Winspear Opera House. The scale of the show — performed live for a weekend in Dallas but broadcast to cities around the world — was immense. Six actors and a Greek chorus of robots moved across the stage, each controlled by “an undergrad with an Xbox controller.” The voices of performers were used to generate light projections on the walls of the set and theater.

Parrish built a mobile app companion for the show, which distant viewers could use to give inputs and influence the performance. “If you were in the house, in the show, you would see all this lighting change, and you would feel the presence of all these other audiences that were around the world,” Parrish says. This was the type of work he had always dreamed of doing: using technological means of connecting people who care about the same thing.

While delighted with MIT’s diverse resources, Parrish says he sometimes struggled to find a place that he could just go and draw at MIT — until he found the MIT Museum Studio, which he describes as “not really a makerspace, but an art and technology space at MIT.” He has become an advocate for the space, and used it to create a floor panel that reacts, with light, as users walk across it. Dubbed “Luminescence,” the system is one of the first projects that he conceived, designed, programmed, and constructed on his own.

“Luminescence” was inspired by the bioluminescence of the James Cameron film “Avatar” and funded by the MIT ProjX Grant. Parrish is using the MIT Museum Studio to design his senior show, likely a nighttime spectacular. “I did the floor panel project in that space, and that has kind of been my companion to the Media Lab. I kind of generally sleep in both places,” says Parrish, smiling.

Parrish is quick to admit that his path through undergrad — particularly his constant creative expression at a technology school — has been atypical. But he has used each project and collaboration to further his lifelong dream of working as a Walt Disney Imagineer who helps create the Disney theme parks and other attractions.

His connection to Disney began as a child. His family life was difficult, but every few years his mother and siblings would drive to Disney World. “You can escape and be around people who are always nice to you, and who are happy, and have fun and forget the rest of the world,” Parrish says. He would look at rides and shows, and know that he someday wanted to create his own. “I [knew I would] need to know how to build things, and how to understand art, and how to use art to impact people in a positive way. So I am studying music, studying creative design, studying drawing, studying mechanical engineering, computers, mechanical stuff, everything someone needs to know in order to be able to do that,” Parrish says.

Last summer Parrish interned at Walt Disney Imagineering, where he worked on show control systems for new lands and attractions. “[Shows] have to be able to run reliably 18 hours a day, for 365 days a year, for 30 years straight. So, building systems that are that robust and still have creative intent is incredibly difficult,” Parrish says. “It was unreal to be able to see how you can build something at that scale and still actually achieve something meaningful and enjoyable, and fun and immersive.”

Parrish added a theater concentration this fall, and has begun to formally study composition, arrangement, and directing.

“I truly feel like I actually have the tools now to actually go out in the world and do stuff, build things, create change, create big beautiful things for people to enjoy, whatever kind of manifestation that takes,” Parrish says.

No matter what type of work he’ll be doing at Disney or elsewhere, he says that his technical education — and the opportunities he has had to apply it — will be invaluable. “I am not going from problem sets to building rides; I’m going from robotic operas to [theme park] rides and shows. I can at least have a sense of ‘OK, this is how it’s kind of supposed to work.’”