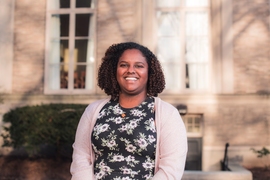 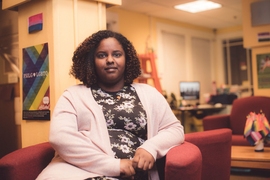 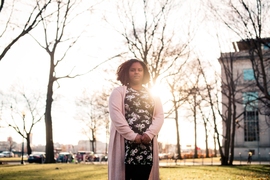 Caption:
“[W]hen I came here for CPW [Campus Preview Weekend], I realized that these people were really passionate about what they were doing, and that they were doing really cool things. It’s nerdy, but it’s my kind of nerdy,” senior Hermoon Worku says.

Caption:
“[W]hen I came here for CPW [Campus Preview Weekend], I realized that these people were really passionate about what they were doing, and that they were doing really cool things. It’s nerdy, but it’s my kind of nerdy,” senior Hermoon Worku says.

Hermoon Worku never missed a day of elementary school until fifth grade, when she began fainting frequently. At a regular check-up, her pediatrician realized that Worku was severely anemic. Her parents took her for a blood transfusion the next day at an Atlanta hospital.

“I was very sad I missed [school] that day,” remembers Worku, now an MIT senior. “But a lot of the patients who were [in my unit] had leukemia. So when my extended family came to visit, and they heard about which wing of the hospital I was in, they were very concerned because they didn’t know the story, and they were concerned I had cancer.”

Looking back, she says that her brush with the hospital was key to her decision to pursue a career in medicine. In addition to undergoing treatment, the 11-year-old Worku had to navigate the situation for her whole family, who emigrated from Ethiopia when she was two. “That medical scare along with the difficulties of communication — my family not really knowing what the doctors were talking about, and my sister and I having to translate — made me more aware of the medical field, and then also made me more aware that I wanted to be an advocate for [patients],” she says. She hopes to one day work as a pediatric or fetal surgeon.

Before coming to MIT, Worku worried that she wouldn’t fit in. The MIT of her imagination was a nerdy place, where everyone talked only about math. But “when I came here for CPW [Campus Preview Weekend], I realized that these people were really passionate about what they were doing, and that they were doing really cool things. It’s nerdy, but it’s my kind of nerdy,” she says.

Before starting her first semester, Worku participated in the Interphase EDGE program through the Office of Minority Education. For six weeks, students take courses in physics, calculus, chemistry, and communication, while becoming acclimated to MIT. “[We were] learning how to learn,” Worku says.

A biology major, Worku has dedicated herself to acquiring the skills she needs for her future. As a UROP student in the lab of Alan Jasanoff, a professor of biological engineering, brain and cognitive sciences, and nuclear science and engineering, Worku worked with graduate student Sarah Bricault to characterize the reward pathway in rats’ brains using functional MRI imaging.

A language for advocacy

Work knows that, as a practitioner, she will need to be able to communicate directly with her patients. “I really want to be an advocate for my patients, and I know so many U.S. citizens and people [in the U.S.] are Spanish speakers. It’s almost a second main language, so I really wanted to be able to communicate in both English and Spanish,” Worku says.

Worku began studying Spanish as a sophomore and travelled to Madrid with MIT Global Education and Career Development's MIT-Madrid program last year. In addition to taking classes at the Complutense University of Madrid, she shadowed doctors working at the Hospital Sanitas La Moraleja, through the EUSA internship program.

“One of my main goals when I was studying abroad was to learn medical Spanish. Specifically, how to interact with patients, what kind of tenses to use, what kind of language is appropriate, what the specific medical terms are for body parts,” Worku says. “I really appreciated being able to learn on my feet like that.”

Throughout the semester, Worku rotated through the urgent care center, pediatrics, obstetrics and gynecology, and pharmacy. She became fast friends with some of the residents and senior physicians whom she shadowed, and even scrubbed in on a C-section. She says she was often treated as a medical student, because the Spanish medical school system is combined with the undergraduate system. “I actually did suction, [something I had] only seen on ‘Grey’s Anatomy.’ It was really exciting for me to actually be involved and interact with patients,” Worku says.

Back at MIT, Worku has worked as an advocate for inclusion across campus. She began as a student worker in the Rainbow Lounge, a space for connecting and supporting all LGBTQ activities on campus. In addition to planning weekly events, sharing upcoming programming with other students, and keeping the lounge open as a physical meeting space, last year Worku worked with Aquil Fannis ’16 and Michael Holachek, now a senior, to create Affiliated, a project to create a more queer-inclusive culture at fraternities, sororities, and independent living groups (FSILGs).

Worku sees Affiliated’s mission as starting conversations between LGBTQ students and allies and the rest of the student community. “At the end of the [last] semester we had an ‘Ask a Queer Person’ booth, and we really asked the community to let us know what they wanted to know, so we could help educate. That is part of our initiative: education and advocacy,” she says.

This semester, Worku is launching Affiliated’s chapter advocacy program. “We want to fill in the gaps of knowledge that exist. A really big part of the [program] is for the FSILGs to request us. That is the first step they are taking, saying ‘Hey we want to be more inclusive, and part of the way is having you come educate us.’ And then we will ask them what they want to be educated on, and tailor our presentations around their specific organization and their culture,” she explains.

Worku plans to enter medical school and combine teaching, patient advocacy, and hands-on surgery after working as tutor in a Match Charter school in the Boston Area next year. She hopes to return to Ethiopia periodically to work in a relief clinic.

As a physician, Worku intends to work with each of her patients holistically. “When I pursue my MD I am also going to be pursuing a public health master’s, so that I can really look at how all aspects of people’s identities affect their medical care, and affect their lives in general. I think that is really important to look at the patient as a whole, in a way that I feel like in the past it wasn’t necessarily done.”

Taking many forms of expertise to heart