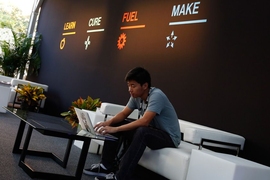 How can the benefits of the digital economy be shared more broadly? How can recent technological advances — from algorithms to apps, and from Big Data to mobile devices — be leveraged to build skills, jobs, and opportunities for more workers?

Proposals for addressing such consequential questions and others will emerge during Solve at HUBweek, set to take place during the annual “HUBweek” celebration of innovation and creativity in Greater Boston, where Solve debuted last year.

Solve, a project of the MIT Office of the President whose mission is to uncover, evaluate, and advance plausible solutions to human problems, provides a platform for teams of innovators to propose their ideas at events such as Solve at HUBweek. The teams with the best solutions will be advanced to a central gathering in May 2017, called Solve at MIT, where the Institute will convene experts and influencers who can help turn the finalists’ ideas into action.

Solve’s methodology is exemplified by the Inclusive Innovation Competition (IIC). On Sept. 27, a group of 24 Solve finalists (winnowed by 70 judges from a field of 243 entrants) will pitch their proposals for how the benefits of innovations can be more widely enjoyed. Winners in four different categories — from how to “re-skill” workers, to how technology can help better match jobseekers with opportunities — will share a total of $1 million in prizes presented during an evening awards ceremony open to the public. Some of the winners will later attend Solve at MIT.

The idea for the IIC emerged at Solve last year and was launched in March by Solve and the MIT Initiative on the Digital Economy. The competition is being funded with support from Joseph Eastin, Eric and Wendy Schmidt, The Rockefeller Foundation, The Joyce Foundation, and The NASDAQ Educational Foundation. Eric Schmidt attended Solve in 2015.

Making the digital economy work for more workers is just one of several daunting global problems that Solve is tackling through its distinctive crowdsourcing approach, which brings together a wide range of participants from industry, civil society, academia, and grassroots organizations to identify and implement the most promising ideas for progress.

“Solve is a natural outgrowth of the collaborative problem-solving culture we embrace at MIT,” President L. Rafael Reif says. “As an institution, we see our role as helping to make a better world. But in this work, we are intensely aware that we need brilliant, dedicated partners from many different sectors and every corner of the world. With Solve, our goal is to galvanize unexpected teams to deliver solutions with global consequences.”

Solve’s new executive director, Alex Amouyel, who will take up the reins officially on Sept. 25, says that while Solve began as a collection of illuminating panel discussions, over the past year it has evolved into a robust platform for solving problems. New this year are five challenges across Solve’s four signature pillars — Make, Learn, Fuel, and Cure — which together have generated more than 100 proposed solutions from a diverse range of organizations.

On Sept. 28 at the MIT Media Lab, for example, participants in the two challenges for the Fuel pillar will present their ideas for how to remove and sequester carbon from the atmosphere, and how new digital technologies can be used to help put a price on emissions of carbon dioxide and other greenhouse gases.

“Semifinalists will pitch their ideas at Solve at HUBweek, and the very best of those will then move up to the next phase, at ‘Solve at MIT’ in May,” Amouyel says. “At that point, we will assess what’s needed and take steps to make those solutions a reality.”

Also on Sept. 28, semifinalists in the Learn pillar challenge will present their solutions for how to improve education for children in refugee camps. The challenge leader is Admir Masic, the Esther and Harold E. Edgerton Career Development Assistant Professor in MIT’s Department of Civil and Environmental Engineering.

“One of civil engineering’s grand challenges today goes beyond securing shelter, food, and transportation, to improving the infrastructure for and access to education,” Masic says. “Education is not only a basic human right, it is an underestimated component of restoring long-term stability and prosperity in regions of conflict. Thanks to the focus that Solve has brought to this issue, there is a community building quickly, determined to rise to this challenge.”

Masic and his fellow judges reviewed 62 proposals. Some address the unique pedagogical challenge of how children learn best in refugee settings, while others focus on developing new platforms for digital education to reach them from afar.

“One project pairs volunteer teachers from around the world with refugee students, to do one-on-one lectures,” Masic says. “It’s a crowdsourced education platform for refugees around the world, harnessing the power of e-learning. It is one example of many that we received, that shows how technology can help refugees directly and give humans around the world the opportunity to express the highest aspects of their humanity.”

Masic spent his early teen years in a refugee camp in Croatia, after his family fled the Bosnian War. He knows the power of both education and reaching out across boundaries: A director of a local school changed Masic’s life trajectory by letting him attend classes, despite legislation that prevented him from officially enrolling due to his refugee status.

“I was able to occupy my time by solving chemistry problems,” Masic recalls. “I became one of the best chemists of Croatia because this man gave me that opportunity. To keep these children out of trouble and guarantee them a future, we need to act quickly, with efficient, deliverable solutions.”

Masic is optimistic that Solve can help create more stories like his, by identifying scalable solutions to benefit millions of displaced children languishing without education in camps around the world today. He cites innovative digital learning platforms such as edX and MITx as examples of approaches that could be leveraged. “The essential challenge,” Masic says, “is to overcome the physical constraints of not being able to go to school.”

From plausible proposal to real-world action

Those attending the pitches at HUBweek will quickly appreciate Solve’s two core premises: The best ideas can come from anywhere, and identifying and celebrating them is just one step on a journey.

For the Learn challenge, a group of finalists will be chosen to continue working with Masic and others at Solve and MIT, through the spring. “Our aim is to arrive in May with a handful of finalists, a couple of which will already be developed to the point that they are ready to be implemented as a pilot project,” Masic says.

By drawing on MIT’s in-house expertise and broad convening power, and providing technological and organizational guidance, Solve will provide sustained support to the challenge finalists in bringing their ideas to reality. “The real prize is the connection to people with the resources to help you pilot, fund, and implement your solution,” Amouyel says.

Going forward, her goal is to generate the widest possible participation. “We’re starting off with the premise that anyone around the world can have a good idea to solve one of these challenges,” she says. “At Solve, we can play a role in solving big world problems by bringing people with fresh ideas together with people who have the resources and influence to help bring them to life.”

She envisions Solve tapping into networks to find solutions in places such as co-working spaces in Cambodia and youth tech entrepreneurship forums in East Africa. It is to tap global reservoirs of creative thinking that MIT created Solve, a platform for collecting and sharing ideas and a springboard for implementing and disseminating them. The coming events at HUBweek offer members of the public a chance to engage with these challenges themselves and watch the solutions coalesce and spring to life.

Solve 1 took place during the inaugural edition of HUBweek last fall, which was jointly launched by MIT, Harvard University, The Boston Globe, and Massachusetts General Hospital. HUBweek, billed as a “festival for the future,” takes place again from Sept. 25 to Oct. 1. Its program of more than 115 events across the Boston area will include hands-on workshops, interactive art exhibits, documentary film festivals, competitions, and curated conversations on topics such as entrepreneurship and emerging technology, life sciences, and the arts.

In addition, some of HUBweek’s many other marquee events include a Sept. 26 civic forum at Faneuil Hall hosted by Harvard professor Michael Sandel; a Sept. 29 panel discussion on the hype and promise of Blockchain, the technology that underlies Bitcoin; and the Sept. 30 Demo Day, showcasing more than 100 of the highest impact startups and companies in Greater Boston’s innovation ecosystem, including more than 15 MIT-affiliated groups.

Much of HUBweek’s programming on Tuesday, Sept. 27, will take place in Kendall Square, with MIT contributions such as “Getting MIT on Your Team,” hosted by the School of Engineering, and “How to Scale Your Big Idea in a Complex World,” hosted by the System Design and Management Program. On Sept. 28 and 29, MIT and its Climate CoLab will host its annual Crowds and Climate conference.