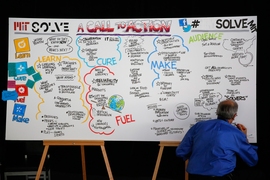 How can we use information technology to improve health care outcomes? How can we make the Internet accessible to people everywhere? How will we provide a secure food supply for 9.6 billion people?

These were a few of the challenges posed by MIT’s inaugural Solve conference, which took place last week. The four-day program brought more than 350 leaders in technology, philanthropy, business, and policy to campus for four days of talks, workshops, and discussions on pressing global problems.

“It was an extraordinary success, with many memorable moments,” says Jason Pontin, editor-in-chief and publisher of MIT Technology Review, which produced the program. “A lot of things went amazingly well. I think a lot of people are surprised and pleased, and there is a strong commitment at MIT to coming back next year. It was also an experiment, and Solve II will inevitably evolve from the lessons we’ve learned from Solve I.”

The foundational event was based around four key “pillars” — Learn, Cure, Fuel, and Make — that categorized issues and questions around education, health care, resources, and infrastructure. Participants split into moderated working sessions over the four days, where they had the chance to discuss, debate, and exchange viewpoints.

Though notes from the sessions have not yet been compiled, a few central ideas have already emerged from each of Solve’s four pillars.

“One of the takeaways was that there are vast inequalities and differences in health care outcomes based not just on income, but on geographic location — not just between the U.S. and the developing world, but even in the U.S., within 100 miles between Boston and smaller towns in the Northeast,” Pontin says. “Information technology could be a powerful contribution to managing better health outcomes more affordably.”

“In Make, [we were] struck by the enormous challenge of how we will physically manufacture the world of 2050,” Pontin says. “We will have to build as much as we have ever built in all of history again. Hundred of new cities and many existing cities either have to be removed or strengthened against rising sea levels. We’ll need to develop new mechanisms of manufacturing to build cities sustainably.”

Learn sessions addressed preparing students to become lifelong learners; transforming universities to become partners in that pursuit; supporting teachers and transforming teaching; and bringing the benefits of in-person education to digital learning. In addition to the workshops, a “fireside chat” on the future of American education was led by Laurene Powell Jobs, founder and president of the Emerson Collective, which supports innovative initiatives in education.

“How we teach you how to learn, and how you learn how to learn, were the great themes,” Pontin says. “The world moves very quickly; 65 percent of jobs that people will occupy in the course of their lives, if they’re graduating now, don’t yet exist. It’s important to give people the tools for lifelong learning and to remake educational institutions so they can provide lifelong learning.”

“In Fuel, perhaps one of the takeaways was that we don’t lack for technical proposals for how to address climate, energy, and resources challenges,” Pontin says. “What we don’t possess, arguably, are many of the overarching policies and mechanisms of global coordination and cooperation that can make a difference.”

Pontin moderated the session on new nuclear reactor designs. “There were people in the room who had been working on those problems for decades; former regulators who were asking for assurances of safety; investors who wanted to change the world; the Union of Concerned Scientists, deeply skeptical of nuclear energy at all,” Pontin says. “It was a conversation where we reached no conclusion, but crucially, we agreed to come back and keep working.”

Solve gave rise to less-formal conversations as well. “There were dinners and fireside chats with philanthropist and technologists where people passionately argued around issues like: How do you wish to be remembered? How do we address inequality? How do people change their minds?” Pontin says.

Thursday afternoon, attendees heard from members of the MIT and Harvard University communities at an event, open to the public, called “Dissolve.”

“We opened the Solve pavilion to Dissolve, where students and faculty who felt that issues of inequality had been inadequately addressed at Solve expressed their views about how best to decrease inequality,” Pontin says. “They were very candid with us about a path forward for thinking about inequality in our society.”

“In a very MIT fashion, having run the experiment, we’ll consider how to refine the next stage,” Pontin adds regarding planning for the next Solve conference. “I think there is a strong desire amongst the participants for more participation next year — to really roll up their sleeves and work on problems.”

Dissolve unconference, a summit on inequality, will coincide with SOLVE and HUBWeek