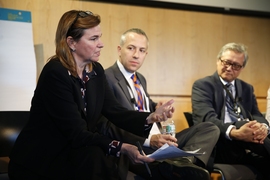 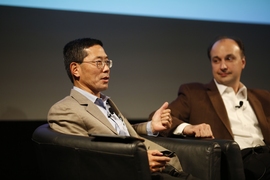 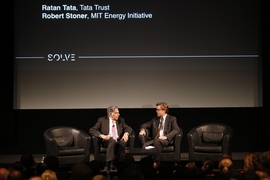 ↓ Download Image
Caption: A panel on energy in the developing world featured Ratan Tata, chairman of Tata Trust (left), and Robert Stoner, deputy director for Science and Technology for the MIT Energy Initiative.

The challenges of providing clean, reliable energy, water, and food to people everywhere — and especially in parts of the developing world — is a key focus of Solve, a four-day conference taking place this week at MIT. A full day of talks, workshops, and discussions was devoted to the topic on Tuesday.

“The developing world is where growth in energy demand is going to be occurring,” said Robert Armstrong, director of the MIT Energy Initiative (MITEI) and the Chevron Professor in Chemical Engineering, in introducing the day’s final event: a public discussion between Ratan Tata, chairman emeritus of India’s Tata Group, and Robert Stoner, MITEI’s deputy director and director of MIT’s Tata Center for Technology and Design. Armstrong stressed that delivering clean energy in South America, Africa, and India carries great challenges — but also great opportunities to dramatically improve the quality of life for people there.

Making such progress is the aim of the Tata Center, which has carried out a series of pilot programs involving teams of MIT students working with non-governmental organizations in India. These projects have aimed to create microgrids so those in rural off-grid villages can sell electricity to their neighbors; to improve pumps for agricultural irrigation; and to develop inexpensive artificial limbs that are appropriate for local conditions.

Tata served for 21 years as chairman of Tata Sons, which controls one of India’s largest industrial conglomerates. Two philanthropic trusts established by his great-grandfather, the company’s founder, distribute about $100 million a year to support such projects, he said.

“In India, about 50 percent of the population is in the rural parts, but they are under pressure to move to urban areas,” Tata said: Those rural areas represent only 15 percent of India’s GDP. “Prosperity is moving to the cities, and rural India is lagging.”

Providing basic services such as reliable electricity could enable significant improvements in rural education, health, and agriculture. “You can’t have growth unless you have electric power,” Tata said.

India aims to electrify the entire country, but progress has been slow — in some cases amounting to “one bulb in the middle of a village,” Tata said. But really, he said, each home needs enough electricity enough to power a few lights, so schoolchildren can study after dark, and small pumps to support agriculture.

One group of MIT students sponsored by the Tata Center has worked on a project that would enable village-scale microgrids, where one resident who could afford solar panels or a diesel generator could sell excess power to neighbors. This would require power controllers that can both deliver power to devices that need it and monitor usage for billing purposes. Tests of the system last summer in one rural village “gave us a lot of confidence” that the project can move forward and have significant impact, Stoner said, adding: “We’ll try it on a very large scale in a larger village in the spring.”

Stoner added that the Tata Center’s work, while initially based in India, is intended to develop solutions that may be useful throughout the developing world. It has begun doing some work in Rwanda, also geared at improving access to power. But Stoner pointed out that solutions need to be geared to local needs and conditions. For example, he said, Rwanda “has a completely different way of handling electricity.”

The Tata Center has also worked to develop solar-powered pumps for small farms. Such pumps have tended to be much larger than is needed, since they were designed for larger agricultural operations. Making more appropriately sized pumps available — small enough to be powered by a few portable solar panels — could make irrigation much more widely available, Stoner said.

Another project has addressed the need to deal with boiler ash, a waste product from industrial boilers. Researchers are working to chemically modify this abundant material so that it could be made into bricks and other building materials, Stoner said.

Another priority is developing devices for rural health care: “I’m very excited about the work the Tata Center has done on medical devices and diagnostics,” Tata said. Simple and inexpensive diagnostic tools could go a long way toward ensuring that patients who live far from health care facilities can get appropriate and timely care, he added.

Tata said that a new culture of entrepreneurship is rapidly growing in India. “It’s a great new startup culture in India, almost reminiscent of what you saw in the U.S. in the ’70s,” he said. And it’s serious business: “It’s not about charity, it’s about doing it for profit. I think a great opportunity is there,” Tata said.

“We are at the beginning of something, and we’re looking for opportunities,” Stoner said. Given the ingenuity of the students and faculty associated with the Tata Center, he said, “There’s no end to what we can do.”