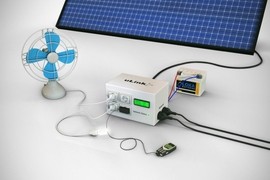 ↓ Download Image
Caption: The key element of the new microgrid system is the power management unit, seen at the center in this rendering. Various devices — shown here as a fan, a light, and a cellphone charger — can be plugged directly into the unit, along with lines to supply power to other houses. The unit manages the power coming in from solar panels (shown at top), and sends the power either to the devices or, if not needed immediately, to storage batteries (right of center). The display panel can provide information about usage.

Credits: Courtesy of the MIT team 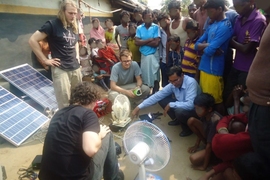 ↓ Download Image
Caption: In one of the team’s visits to a village in India, they demonstrated the elements of the system to local people interested in taking part in the pilot program.
Credits: Courtesy of the MIT team

Caption:
The key element of the new microgrid system is the power management unit, seen at the center in this rendering. Various devices — shown here as a fan, a light, and a cellphone charger — can be plugged directly into the unit, along with lines to supply power to other houses. The unit manages the power coming in from solar panels (shown at top), and sends the power either to the devices or, if not needed immediately, to storage batteries (right of center). The display panel can provide information about usage.
Credits:
Courtesy of the MIT team

Caption:
In one of the team’s visits to a village in India, they demonstrated the elements of the system to local people interested in taking part in the pilot program.
Credits:
Courtesy of the MIT team

An estimated 1.3 billion people around the world lack access to electricity, and as a result spend scarce resources on kerosene and other fuels for lighting. Now MIT researchers have developed a system to enable those in rural villages who can afford solar panels to share power with their neighbors, providing both income for the owners and much-needed power for the neighbors.

The key to the system, developed over two years of research and numerous trips to India, lies in a simple device the team developed that is smaller than a shoebox. The power management unit (PMU) performs a variety of tasks, regulating how electricity from solar panels or other sources gets directed to immediate uses — such as powering lights and cellphones — or to batteries for later use. At the same time, the PMU monitors how much power is going to each user, providing a record that can be used for billing without a need for individual meters.

MIT doctoral students Wardah Inam and Daniel Strawser, under the guidance of electrical engineering professors Rajeev Ram and David Perreault, will head to India next week, along with several other team members, to spend the summer doing field tests of the system. Along the way, they will stop off in Seoul, South Korea, to present an account of their work at the International Conference on Power Electronics.

Test installations will take place in two villages in the Jamshedpur area in northeastern India — one of which has no outside power source at all, and one of which is connected to the grid, but gets only intermittent access, averaging two to three hours of electricity a day.

Some people in these villages “have never interacted with this kind of technology before,” Inam says of the findings from their previous trips, where they met with village leaders and residents to discuss their needs.

A few of the villages’ houses already have small, simple solar-power systems set up to power a few low-power LED lights and charge cellphones. These early solar installations, Inam explains, will now provide their owners with an opportunity to earn revenue by selling excess power to neighbors who lack any source of electricity.

Unlike typical solar installations in the area — where every lamp, fan, or charger is hard-wired to the system — the new MIT-designed systems will allow for flexibility in adding or removing lights or other devices; adding extra power sources, including more solar panels or other sources such as diesel generators; and adding connections for additional users over time.

While most of the world’s electric grid systems use AC (alternating current), the new MIT systems operate entirely on DC (direct current), which greatly simplifies setup, lowers costs, and is safer for users to operate. Since the typical uses of electricity in these settings — lighting, charging phones, and powering fans — are all either inherently DC systems or can easily be converted to DC, and solar panels by their nature produce DC, this simplification eliminates the need for multiple devices to convert DC to AC, and back again. And because it is designed to operate at less than 50 volts, the systems are not capable of delivering life-threatening shocks even if wiring gets damaged and people are accidentally exposed to bare wires, the researchers say.

Rather than bringing in a system designed by outsiders, Inam says, the idea is for locals to develop a system to meet their own specific needs and preferences. “We want to empower the people to build a grid,” she explains. Already, some in these villages can afford to pay for solar installations at their homes, or can obtain a loan to finance it. But being able to sell some of that power to other nearby homes through a “microgrid” could enable users to buy larger systems, with some of the cost defrayed by power sales.

Meanwhile, those neighbors, without having to pay any upfront installation costs, would get the benefit of power for lights and charging for an estimated cost of $2 to $5 a month — “less than what they pay now for lighting, using kerosene or candles,” Inam says. “For the same amount, they’ll get better, safer lighting, as well as other services.”

Phone charging is one high-demand service that would be met by such a system. Cellphone service is widespread in India and other developing nations, but people often have to travel to a nearby city, or pay steep prices locally, to charge their phones. In addition, the solar power would enable them to use electric fans, a serious need in this very hot region. “A lot of solar home systems now don’t have that capability,” Inam says.

“We think this is really scalable,” Strawser says, adding that it could be profitable at many stages — for companies that provide the components, local workers who do the installations, solar panel owners who get revenue from the power, and end users who get power that not only facilitates reading and working after dark, but can also power water pumps for irrigation and other uses.

“It’s a bottom-up approach,” he says, in which local users — who have already contributed to the design choices through their interactions with the team — get to decide what gets installed where and when.

Saurabh H. Mehta, an energy professional in India who is not associated with this project, says that in seven years of looking at solar installations in that country, it has always bothered him “how all of the expensive power produced is not fully utilized. With this technology this certainly can change, as the owners of the system can easily supply surplus power to their neighbors. This can ultimately make the system more affordable and thus should encourage more uptake of off-grid renewable energy systems.”

The team also includes research associate Reja Amatya, undergraduates Ahmet Musabeyoglu and Erik Johnson, and graduate student Varun Mehra, who will all be working on the project in India this summer. Graduate students Szymon Sidor and Victor Lesniewski and former visiting professor Khurram Afridi also contributed to the team. The work was supported by the MIT Tata Center for Technology and Design.