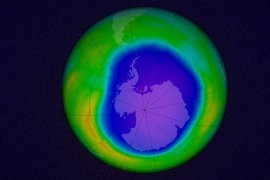 ↓ Download Image
Caption: A simulation of the Antarctic ozone hole, made from data taken on October 22, 2015.

Scientists at MIT and elsewhere have identified the “first fingerprints of healing” of the Antarctic ozone layer, published today in the journal Science.

The team found that the September ozone hole has shrunk by more than 4 million square kilometers — about half the area of the contiguous United States — since 2000, when ozone depletion was at its peak. The team also showed for the first time that this recovery has slowed somewhat at times, due to the effects of volcanic eruptions from year to year. Overall, however, the ozone hole appears to be on a healing path.

The authors used “fingerprints” of the ozone changes with season and altitude to attribute the ozone’s recovery to the continuing decline of atmospheric chlorine originating from chlorofluorocarbons (CFCs). These chemical compounds were once emitted by dry cleaning processes, old refrigerators, and aerosols such as hairspray. In 1987, virtually every country in the world signed on to the Montreal Protocol in a concerted effort to ban the use of CFCs and repair the ozone hole.

“We can now be confident that the things we’ve done have put the planet on a path to heal,” says lead author Susan Solomon, the Ellen Swallow Richards Professor of Atmospheric Chemistry and Climate Science at MIT. “Which is pretty good for us, isn’t it? Aren’t we amazing humans, that we did something that created a situation that we decided collectively, as a world, ‘Let’s get rid of these molecules’? We got rid of them, and now we’re seeing the planet respond.”

Solomon’s co-authors include Diane Ivy, research scientist in the Department of Earth, Atmospheric and Planetary Sciences, along with researchers at the National Center for Atmospheric Research in Boulder, Colorado, and the University of Leeds in the U.K.

The ozone hole was first discovered using ground-based data that began in the 1950s. Around the mid-1980s, scientists from the British Antarctic survey noticed that the October total ozone was dropping. From then on, scientists worldwide typically tracked ozone depletion using October measurements of Antarctic ozone.

Ozone is sensitive not just to chlorine, but also to temperature and sunlight. Chlorine eats away at ozone, but only if light is present and if the atmosphere is cold enough to create polar stratospheric clouds on which chlorine chemistry can occur — a relationship that Solomon was first to characterize in 1986. Measurements have shown that ozone depletion starts each year in late August, as Antarctica emerges from its dark winter, and the hole is fully formed by early October.

Solomon and her colleagues believed they would get a clearer picture of chlorine’s effects by looking earlier in the year, at ozone levels in September, when cold winter temperatures still prevail and the ozone hole is opening up. The team showed that as the chlorine has decreased, the rate at which the hole opens up in September has slowed down.

“I think people, myself included, had been too focused on October, because that’s when the ozone hole is enormous, in its full glory,” Solomon says. “But October is also subject to the slings and arrows of other things that vary, like slight changes in meteorology. September is a better time to look because chlorine chemistry is firmly in control of the rate at which the hole forms at that time of year.  That point hasn’t really been made strongly in the past.”

The researchers tracked the yearly opening of the Antarctic ozone hole in the month of September, from 2000 to 2015. They analyzed ozone measurements taken from weather balloons and satellites, as well as satellite measurements of sulfur dioxide emitted by volcanoes, which can also enhance ozone depletion. And, they tracked meteorological changes, such as temperature and wind, which can shift the ozone hole back and forth.

They then compared their yearly September ozone measurements with model simulations that predict ozone levels based on the amount of chlorine that scientists have estimated to be present in the atmosphere from year to year. The researchers found that the ozone hole has declined compared to its peak size in 2000, shrinking by more than 4 million square kilometers by 2015. They further found that this decline matched the model’s predictions, and that more than half the shrinkage was due solely to the reduction in atmospheric chlorine.

“It’s been interesting to think about this in a different month, and looking in September was a novel way,” Ivy says. “It showed we can actually see a chemical fingerprint, which is sensitive to the levels of chlorine, finally emerging as a sign of recovery.”

The team did observe an important outlier in the trend: In 2015, the ozone hole reached a record size, despite the fact that atmospheric chlorine continued to drop. In response, scientists had questioned whether any healing could be determined. Going through the data, however, Solomon and her colleagues realized that the 2015 spike in ozone depletion was due primarily to the eruption of the Chilean volcano Calbuco. Volcanoes don’t inject significant chlorine into the stratosphere but they do increase small particles, which increase the amount of polar stratospheric clouds with which the human-made chlorine reacts.

“Why I like this paper so much is, nature threw us a curveball in 2015,” says Ross Salawitch, professor of chemistry and biochemistry at the University of Maryland. “People thought we set a record for the depth of the ozone hole in October 2015. The Solomon paper explains it was due to a specific volcanic eruption. So without this paper, if all we had was the data, we would be scratching our heads — what was going on in 2015?”

As chlorine levels continue to dissipate from the atmosphere, Solomon sees no reason why, barring future volcanic eruptions, the ozone hole shouldn’t shrink and eventually close permanently by midcentury.

“What’s exciting for me personally is, this brings so much of my own work over 30 years full circle,” says Solomon, whose research into chlorine and ozone spurred the Montreal Protocol. “Science was helpful in showing the path, diplomats and countries and industry were incredibly able in charting a pathway out of these molecules, and now we’ve actually seen the planet starting to get better. It’s a wonderful thing.”

This research was supported, in part, by the National Science Foundation and the U.S. Department of Energy.

In their round up of the top science stories of 2016, Science News highlighted several MIT research breakthroughs. The top story of the year was the successful detection of gravitational waves by researchers from MIT, Caltech and the LIGO Scientific Collaboration. Another highlight was the discovery by Prof. Susan Solomon that the hole in the ozone layer over Antarctica is shrinking.

New research from Prof. Susan Solomon has found that while banning the use of CFCs caused the ozone hole to shrink by 1.5 million square miles, carbon dioxide is still a major problem. “The chemicals responsible for the ozone problem break down in the atmosphere much more quickly than carbon dioxide connected to global warming does,” writes Faye Flam of Bloomberg View.

A recent study shows that the ozone hole has shrunk by more than 4 million square kilometers since the Montreal Protocol banned the use of CFCs, writes David Abel for The Boston Globe. “This shows that international cooperation on environmental problems can work and be effective,” says lead author Prof. Susan Solomon.

A new study co-authored by Prof. Susan Solomon provides evidence that the hole in the ozone layer over Antarctica is starting to heal, reports Pilita Clark for the Financial Times.  Clark explains that the findings suggest that “more than half the shrinkage in the ozone hole is due to the reduction in atmospheric chlorine coming from CFCs.”

Scientists have found that the Antarctica ozone hole is showing signs of healing and is forming at a slower rate, writes Megan Daley for The Los Angeles Times. Prof. Susan Solomon explains that the findings show that the Montreal Protocol, which banned the use of ozone-destroying chloroflourocarbons, “produced the positive result that we hoped for.”

Eric Hand writes for Science that a recent study led by Prof. Susan Solomon shows the effectiveness of the Montreal Protocol, which banned the production of CFCs. The study also explains that the record-sized ozone hole in October 2015 was caused by a volcano eruption in Chile, writes Hand.

USA Today reporter Doyle Rice reports that a team of researchers led by MIT Prof. Susan Solomon has found that the Antarctica ozone heal is beginning to heal. “The discovery shows global attempts to improve Earth's environment can work, providing a template for how humanity could tackle the exponentially larger issue of climate change,” Doyle writes.

Researchers from MIT and other institutions have found that the Antarctic ozone hole has begun to heal, reports Chris Mooney for The Washington Post. “If you use the medical analogy, first the patient was getting worse and worse, and then the patient is stabilized, and now, “explains Prof. Susan Solomon, “the patient is really starting to get better.”

Scientists have found evidence that the ozone hole over Antarctica is getting smaller and forming later in the year, reports Seth Bornstein for the Associated Press. Prof. Susan Solomon, lead author of the study, says the findings are a "tremendous cause for hope" for fixing other environmental problems.

Research by MIT scientists shows that 30 years after banning CFCs the ozone hole is shrinking, writes Aaron Sidder for National Geographic. “These findings suggest that ozone healing is right on pace with the expected timeline,” explains Sidder.

New York Times reporter Henry Fountain writes that researchers have found evidence that the ozone hole over Antarctica is getting smaller. “We are seeing the planet respond as expected to the actions of people,” says Prof. Susan Solomon. “It’s really a story of the public getting engaged, policy makers taking action, and business getting engaged.”