MIT researchers find that the extremes in Antarctic ozone holes have not been matched in the Arctic.
Audrey Resutek | Joint Program on the Science and Policy of Global Change
Publication Date:
Press Inquiries 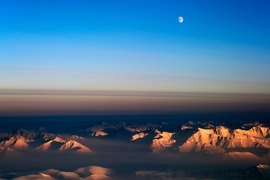 Caption:
An aerial view of clouds over a mountain range in Greenland.
Credits:
Courtesy of Michael Studinger/NASA Earth Observatory

Since the discovery of the Antarctic ozone hole, scientists, policymakers, and the public have wondered whether we might someday see a similarly extreme depletion of ozone over the Arctic.

But a new MIT study finds some cause for optimism: Ozone levels in the Arctic haven’t yet sunk to the extreme lows seen in Antarctica, in part because international efforts to limit ozone-depleting chemicals have been successful.

“While there is certainly some depletion of Arctic ozone, the extremes of Antarctica so far are very different from what we find in the Arctic, even in the coldest years,” says Susan Solomon, the Ellen Swallow Richards Professor of Atmospheric Chemistry and Climate Science at MIT, and lead author of a paper published this week in the Proceedings of the National Academy of Sciences.

Frigid temperatures can spur ozone loss because they create prime conditions for the formation of polar stratospheric clouds. When sunlight hits these clouds, it sparks a reaction between chlorine from chlorofluorocarbons (CFCs), human-made chemicals once used for refrigerants, foam blowing, and other applications — ultimately destroying ozone.

After the ozone-attacking properties of CFCs were discovered in the 1980s, countries across the world agreed to phase out their use as part of the 1987 Montreal Protocol treaty. While CFCs are no longer in use, those emitted years ago remain in the atmosphere. As a result, atmospheric concentrations have peaked and are now slowly declining, but it will be several decades before CFCs are totally eliminated from the environment — meaning there is still some risk of ozone depletion caused by CFCs.

“It’s really a success story of science and policy, where the right things were done just in time to avoid broader environmental damage,” says Solomon, who made some of the first measurements in Antarctica that pointed toward CFCs as the primary cause of the ozone hole.

To obtain their findings, the researchers used balloon and satellite data from the heart of the ozone layer over both polar regions. They found that Arctic ozone levels did drop significantly during an extended period of unusual cold in the spring of 2011. While this dip did depress ozone levels, the decrease was nowhere near as drastic as the nearly complete loss of ozone in the heart of the layer seen in many years in Antarctica.

The MIT team’s work also helps to show chemical reasons for the differences, demonstrating that ozone loss in Antarctica is closely associated with reduced levels of nitric acid in air that is colder than that in the Arctic.

“We’ll continue to have cold years with extreme Antarctic ozone holes for a long time to come,” Solomon says. “We can’t be sure that there will never be extreme Arctic ozone losses in an unusually cold future year, but so far, so good — and that’s good news.”

The paper is the first to use observational evidence to confirm the chemical processes in polar stratospheric clouds that lead to ozone loss, says Brian Toon, a professor of atmospheric and oceanic sciences at the University of Colorado at Boulder and an expert on stratospheric ozone loss. Previous studies have used computer models or theories to explain the connection between nitric acid in these clouds and ozone depletion.

“It is an excellent example of the relatively rare paper that is clever and insightful,” says Toon, who was not involved in this most recent study. “[It] goes beyond complex computer calculations to demonstrate from observations an important process occurring in the atmosphere.”