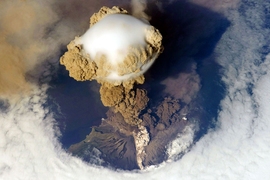 New research shows that relatively small volcanic eruptions can increase aerosol particles in the atmosphere, temporarily mitigating the global warming caused by greenhouse gases. The impact of such smaller eruptions has been underestimated in climate models, the researchers say, and helps to account for a discrepancy between those models and the actual temperatures observed over the last 15 years.

The findings are reported in a paper in the journal Geophysical Review Letters, co-authored by MIT Professor Susan Solomon, postdoc David Ridley, and 15 others. They help to explain the apparent slowdown in the pace of global warming recorded over the last 10 to 15 years — possibly explaining as much as half of that slowdown, the researchers say.

“We’ve learned a lot of new things about how the Earth’s climate changes, not just from year to year but from decade to decade, as a result of recent research,” says Solomon, the Ellen Swallow Richards Professor of Atmospheric Chemistry and Climate Science at MIT. “Several independent sets of observations show that relatively modest volcanic eruptions are important.”

For the last several years, “It’s been quite clear that the observed trends are not following what the models say,” Ridley adds: While the overall warming trend continues, its rate is slower than projected. Previous research has suggested that some of that discrepancy can be accounted for by an increase in the amount of warm water being carried down to the deep ocean, but other processes can also contribute.

The cooling effect of large volcanic eruptions, such as that of Mount Pinatubo in the Philippines in 1991, was already widely recognized; the new work shows that smaller eruptions can have a significant cooling effect as well, and provides a better estimate of how much of the recent reduction in warming could be explained by such eruptions: about 30 to 50 percent of the discrepancy, the team found.

The team found that small eruptions produce a significant amount of aerosol particles, which reflect sunlight, in a region of the upper atmosphere that is relatively poorly monitored: Satellites can provide good data about the atmosphere down to around 15 kilometers above ground level, below which clouds interfere. The team filled in the missing region using multiple balloon, laser radar (lidar), and ground-based measurements.

Aerosols in that intermediate zone, from about a dozen modest eruptions around the world during the last 15 years, may double previous estimates of the cooling effect of eruptions, Ridley says.

“It’s always exciting in science when you can find multiple measurements that lead to a common conclusion,” Solomon adds. “Several independent sets of observations now show that relatively modest volcanic eruptions are more important for global climate than previously thought.”

Overall, these smaller eruptions have lowered the increase of global temperature since 2000 by 0.05 to 0.12 degrees Celsius, counteracting some of the warming that would otherwise have occurred. Now, using this new information, groups that carry out climate modeling can update their models to more accurately project global climate change over the coming decades, Ridley says.

Alan Robock, a professor of environmental sciences at Rutgers University, says, “This work helps to better quantify the impacts of the most important natural cause of climate change, volcanic eruptions. We have an imperfect observational system for volcanic aerosols, and this work exploits some previously unused sources of information to better quantify the effects of small eruptions for the past decade.”

Robock, who was not involved in this research, adds that in light of these findings, “We need a more robust observing system for volcanic aerosols, to do a better job of measuring future small eruptions.”

Ridley and Solomon were the lead authors of this paper, joining authors from Wyoming, Russia, Germany, Japan, California, New York, Virginia, Colorado, and the U.K. The work was supported by the National Science Foundation, the Ministry of Science and Education of the Russian Federation, and the Russian Science Foundation.