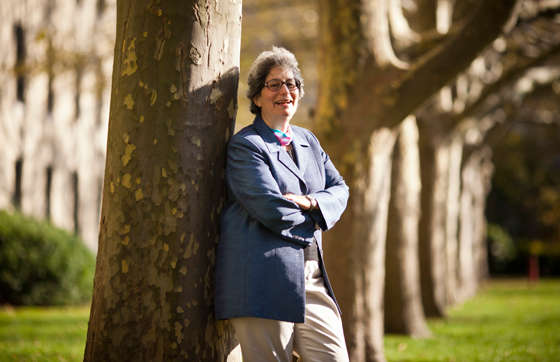 In looking for ways to combat climate change and minimize the planet’s warming, atmospheric chemist Susan Solomon says it’s often helpful — and heartening — to look to the past.

Solomon points out that recent decades have seen major environmental progress: In the 1970s, the United States banned indoor leaded paint following evidence that it was poisoning children. In the 1990s, the United States put in place regulations to reduce emissions of sulfur dioxide — a move that significantly reduced acid rain. Beginning in the 1970s, countries around the world began to phase out leaded gasoline; blood lead levels in children dropped dramatically in response.

During this period, Solomon herself contributed to a milestone in environmental protection: In 1985, scientists discovered that the Earth’s protective ozone layer was thinning over Antarctica. In response, Solomon led an expedition whose atmospheric measurements helped show that chlorofluorocarbons (CFCs) — chemicals then used in aerosols and as coolants in refrigerators and air conditioners — were to blame for ozone depletion. Her discovery ultimately contributed to the basis for the United Nations’ Montreal Protocol, an international treaty designed to protect the ozone layer by phasing out CFCs and other ozone-depleting chemicals.

“I find it tremendously uplifting to look back at how our world has changed,” says Solomon, now the Ellen Swallow Richards Professor of Atmospheric Chemistry and Climate Science at MIT.

Solomon, a renowned atmospheric chemist who worked for 30 years in Boulder, Colo., at the National Oceanic and Atmospheric Administration (NOAA) and as an adjunct professor at the University of Colorado, is continuing her work in climate research at MIT, where she joined the Department of Earth, Atmospheric and Planetary Sciences in January. In addition to her research, Solomon is teaching a course, 12.085/12.885 (Environmental Science and Society), exploring how society has tackled a range of past environmental challenges through science, engineering, policy, public engagement and politics.

“I think young people today are growing up at a time when they don’t know that we actually have made tremendous progress on a whole series of past environmental challenges,” Solomon says. “Climate change has been called the mother of all environmental issues … and I think our approach to this problem can only be better informed if we understand better what we’ve done in the past.”

Born in Chicago, Solomon was completely taken, from a young age, with “The Undersea World of Jacques Cousteau,” a documentary series that followed the legendary marine explorer on his seafaring expeditions. “I pretty much never wavered from the decision right then that I was going to be a scientist,” she recalls.

After high school, Solomon enrolled at the Illinois Institute of Technology, where she received a bachelor’s degree in chemistry. Continuing her studies in atmospheric chemistry, Solomon moved west, to the University of California at Berkeley. “I had a 1977 Gremlin,” Solomon recalls. “It was one of the most awful cars, I think, ever made, but it was really cheap, and I was young and poor. I remember listening to … ‘California Dreamin’’ as I drove out west.”

Solomon received her PhD in chemistry from Berkeley in 1981, and went to work as a research scientist at NOAA. In 1985, scientists with the British Antarctic Survey discovered the ozone hole above Antarctica, prompting Solomon to lead expeditions to the icy continent in 1986 and 1987.

“It’s the next-best thing to going to another planet,” Solomon says of the harsh yet exhilarating experience. “It is the place on our planet that is the most unexplored, the most remote, the most hostile in terms of what the weather and climate is. It is so viciously cold. I just thought it was fantastic exploration, and it’s that spirit of exploration that I think is so endemic to science, and is fundamental to everything about Antarctica.”

In 2001, Solomon chronicled perhaps the most dramatic exploration of that continent in a bestselling book, “The Coldest March”: She used scientific data to examine long-held myths about Robert Falcon Scott, an early-20th-century English explorer who trekked more than 1,000 miles on foot in an effort to become the first to reach the South Pole. But Roald Amundsen, a rival explorer, beat him to the pole by a month, and Scott, along with several team members, perished on the long trek back.

While Scott’s expedition had been ridiculed — for example, by some who painted him as a “dyed-in-the-wool Englishman who only wanted to eat tinned mutton,” and therefore died of scurvy — letters and diaries from his crew told a different story. Many members of the team described eating fresh seal meat and seal liver, which have been shown to be a good source of the vitamins that ward off the disease. Solomon also analyzed weather data from 1912, and discovered that the crew likely would have survived had they not encountered extreme and unpredictable weather conditions.

“It just seemed to me that somebody needed to go back and take a closer look, with all the diaries of all the guys, and what we know from modern science,” Solomon says.

In 2002, Solomon took on another monumental task: leading an international assessment of the scientific work related to climate change. Over six years, she served as co-chair of Working Group 1 of the Intergovernmental Panel on Climate Change (IPCC). In 2007, the group released a comprehensive report on the scientific basis of climate change. Later that year, based in part on the report, the IPCC and former vice president Al Gore received the Nobel Peace Prize.

Solomon continues to seek answers to the most pressing climate challenges. In a widely cited 2009 paper published in the journal Proceedings of the National Academy of Sciences, Solomon and her co-authors determined that, even if humans were to immediately and completely stop emitting carbon dioxide, it would take more than 1,000 years to undo existing changes in Earth’s surface temperatures, rainfall and sea levels.

This news, while sobering, has not deterred the chemist in her scientific goals. Solomon is currently probing which places on the planet are likely to be the most affected by anthropogenic warming in the near future. In addition to her climate research, she also continues to study the stratosphere — the layer of the atmosphere in which the ozone layer is found.

“There are still fantastic surprises in the stratosphere, as there are in any field, no matter how much has been done on it,” Solomon says. “There’s always something to discover, and I love that feeling.”