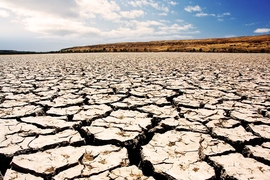 For the past two summers, Australians have sweated through record heat waves, with thermometers climbing as high as 118 degrees Fahrenheit in parts of the country. In January, officials were forced to halt tennis matches during the Australian Open due to extreme heat — a decision made following several days of sizzling temperatures.

Now MIT researchers have found that the intensity of summer temperatures in Australia and elsewhere in the Southern Hemisphere may be better predicted as early as the previous spring by an unlikely indicator: ozone.

From their study, published in the Journal of Climate, the scientists found that as the springtime ozone hole’s severity varies from year to year, the temperatures in Australia and southern regions of Africa and South America reveal correlations: Years with higher springtime ozone experience hotter summers, and vice versa.

The results suggest that ozone levels may help meteorologists predict the severity of summertime temperatures months in advance.

“No one has actually looked at the variation of ozone as a way to forecast or predict the climate or the next summer’s temperature,” says lead author Justin Bandoro, a graduate student in MIT’s Department of Earth, Atmospheric and Planetary Sciences. “This could be especially important for farmers, and for areas like southeastern Australia, where most of that nation’s population resides.”

A spring forecast for summer temperatures

In 1987, countries around the world signed the Montreal Protocol, an international treaty that established a global phase-out of chemicals that cause ozone depletion.   Because of the long lifetime of the chemicals, the ozone hole will continue to occur for many years, but it is expected to slowly begin to become less severe in the next several decades.

Bandoro and his colleagues analyzed annual ozone measurements, from 1979 through the most recent heat wave in 2013.

The team combined data from various sources, including a station in Antarctica that has measured total ozone levels in the same atmospheric column since the 1950s. The team performed a correlation analysis to identify links between ozone levels and variables such as temperature, precipitation, and wind patterns.

Although the ozone hole won’t close for many years, its intensity does vary somewhat from one year to another, and the depth of the hole affects an atmospheric phenomenon known as the Southern Annular Mode, which describes the wind patterns that circle Antarctica and influence the strength and position of fronts and storm systems in the Southern Hemisphere.

In years with high springtime ozone, the researchers found that winds shifted, bringing hotter summer temperatures to much of Australia and parts of southern Africa and South America. Lower ozone levels reversed this behavior, with winds leading to cooler summertime temperatures to these same regions.

The link between springtime ozone and summertime temperatures is particularly strong for the present period, while ozone is still in a recovery phase. When the researchers examined this link from a period before the ozone hole had begun to form, they observed a much weaker correlation.

The implication, Bandoro says, is that as ozone levels likely rise in the coming decades, these parts of the Southern Hemisphere will probably experience systematically hotter summers.

“We can expect that these types of summers are going to be more frequent as the ozone hole recovers in coming decades,” Bandoro says. “When the ozone hole is deep, it essentially holds back climate change from showing its face, and Australia is just starting to feel this effect in the summertime in years with shallower ozone holes.”

David Karoly, a professor of earth sciences at the University of Melbourne, says the MIT group has shown, for the first time, a strong relationship between the severity of summer temperatures in Australia and the strength of the ozone hole the previous spring. The results, he says, point to a long-term warming trend in the Southern Hemisphere.

“As the ozone hole recovers this century, the masking effects of ozone depletion causing reduced summer warming over the Southern Hemisphere will disappear,” says Karoly, who did not participate in the study. “Then there will be an acceleration of the summer warming trends over Australia and South Africa, as the ozone hole recovers and the masking influence disappears.”