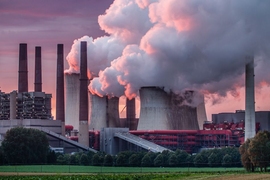 Over two weeks in December, delegates from virtually every country in the world will gather in Paris for the 21st annual United Nations Climate Change Conference. Their ambitious goal: to hammer out a binding international agreement on climate action.

In advance of the conference, organizers have requested that countries submit Intended Nationally Determined Contributions — pledges to reduce greenhouse gas emissions, by an amount that should be “fair and ambitious,” in order to limit global warming to no more than 2 degrees Celsius above pre-industrial levels.

Now a new study by researchers at MIT and the Center for International Climate and Environmental Research in Oslo, Norway, has found that pledges by the three largest emitters — the United States, the European Union, and China — leave very little room for the rest of the world to emit.

Based on the pledges submitted, the U.S. plans to reduce emissions by 28 percent by 2025, and 83 percent by 2050, while the EU will work toward reductions of 40 percent by 2030, and 80 percent by 2050. China has not pledged a reduction, but has indicated that its emissions will peak by 2030; China also aims to improve its energy efficiency by 60 to 65 percent.

Despite these substantial commitments, the researchers found that the rest of the world’s nations would be forced to adopt per capita emissions 7 to 14 times lower than the EU, U.S., or China, by 2030, in order to keep global temperatures from rising higher than 2 C.

“The challenge of this problem is, we have about 7 billion people on the planet, and about 1 billion of us live pretty well,” says Susan Solomon, the Ellen Swallow Richards Professor of Atmospheric Chemistry and Climate Science at MIT. “The other 6 billion are struggling to develop, and if they develop using carbon as we did, the planet is going to get quite hot. And hot is, of course, just the beginning of the story in terms of what climate change actually means.”

Solomon and her colleagues have published their results in the journal Environmental Research Letters.

While countries were asked to demonstrate that their pledges were fair and ambitious, conference organizers provided no framework with which to make such an assessment.

In the new study, the MIT and Norwegian scientists gauged the fairness and ambition of the top three emitters’ pledges using a “cumulative emissions” approach developed by the Fifth Assessment Report of the Intergovernmental Panel on Climate Change.

The cumulative emissions approach finds that a best estimate of 3.7 trillion tons of carbon dioxide can be emitted globally before temperatures rise 2 C above pre-industrial levels. Given the amount of carbon dioxide emitted thus far, and accounting for other greenhouse gases, land-use change, and other factors, the remaining amount is about 1 trillion tons — about 30 years’ worth of current emissions.

How to fairly allocate the remaining allowable emissions among the world’s nations is a complex and contentious issue. Solomon and her colleagues examined two scenarios for fairly reducing emissions by the EU, U.S., and China: an equity approach, which divides the global quota of emissions among all nations based on population; and an inertia approach, which divides the quota based on the current shares of global emissions.

Based on their calculations, they found all three emitters’ pledges fall short of fair: The U.S. and EU pledges may be considered in line with keeping global warming at 2 C only under the inertia scenario, in which the high emitters continue to emit based on their current shares. If, however, both were to adopt an equity scenario, they would have to pledge significantly more emissions reductions, to account for their relatively small share of the world’s population.

China’s pledge deviates significantly from both scenarios, as both would require the country to immediately begin drastic reductions. Instead, China has pledged to begin reducing its emissions in 2030, so as to improve the quality of living for its millions of citizens now living under the poverty line.

“The environment we ask for”

In sum, Solomon and her colleagues conclude that even if the three largest emitters fulfill their pledges, they would “lock the world into a higher long-term temperature increase” of around 3 C.

“People don’t realize that 2 degrees Celsius is a big change,” Solomon says. For instance, she points to the summer of 2003, in which an unprecedented hot summer killed more than 10,000 people throughout Europe.

“That summer was about 2 degrees Celsius hotter than an average European summer,” Solomon says. “By 2050, every summer in Europe will probably be 2 degrees hotter than average, if we keep going the way we’re going right now. Three degrees, in my opinion, is a really frightening change.”

To stave off additional warming, Solomon says countries will need to significantly ramp up efforts to decarbonize. In the short term, she says, international climate talks must integrate discussions on research and development, to spur technological innovation.

“We have to decarbonize the energy system via research and development, changes in technologies and policies, and we need to encourage those to happen,” Solomon says.  “We’ll get the environment we ask for. History has proven time and again that public engagement is essential in making anything change on this planet.”