The head of MIT’s Department of Chemical Engineering will serve on the President’s Council of Advisors on Science and Technology.
Anne Trafton | MIT News Office
Publication Date:
Press Inquiries 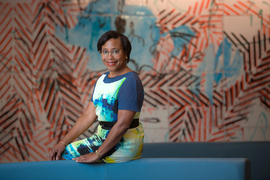 ↓ Download Image
Caption: Professor Paula Hammond, the head of MIT’s Department of Chemical Engineering, will serve on the President’s Council of Advisors on Science and Technology.
Credits: Image: Gretchen Ertl

Caption:
Professor Paula Hammond, the head of MIT’s Department of Chemical Engineering, will serve on the President’s Council of Advisors on Science and Technology.
Credits:
Image: Gretchen Ertl

Paula Hammond, an MIT Institute Professor and head of MIT’s Department of Chemical Engineering, has been chosen to serve on the President’s Council of Advisors on Science and Technology (PCAST), the White House announced today.

The council advises the president on matters involving science, technology, education, and innovation policy. It also provides the White House with scientific and technical information that is needed to inform public policy relating to the U.S. economy, U.S. workers, and national security.

“For me, this is an exciting opportunity,” Hammond says. “I have always been interested in considering how science can solve important problems in our community, in our country, and globally. It’s very meaningful for me to have a chance to have an advisory role at that level.”

Hammond is one of 30 members named to the council, which is co-chaired by Eric Lander, the President's Science Advisor and an MIT professor of biology, Frances Arnold, a professor at Caltech, and Maria Zuber, MIT’s vice president for research.

“Paula is an extraordinary engineer, teacher, and colleague, and President Biden’s decision to appoint her to the council is an excellent one,” Zuber says. “I think about the work ahead of us — not just to restore science and technology to their proper place in policymaking, but also to make sure that they lead to real improvements in the lives of everyone in our country — and I can’t think of anyone better suited to the challenge than Paula.”

Hammond, whose research as a chemical engineer touches on the fields of both medicine and energy, said she hopes to help address critical issues such as equal access to health care and efforts to mitigate climate change.

“I’m very excited about the opportunities presented at the interface of engineering and health, and in particular, how we might be able to expand the benefits that we gain from our work to a broader set of communities, so that we're able to address some of the disparities we see in health, which have been so obvious during the pandemic,” says Hammond, who is also a member of MIT’s Koch Institute for Integrative Cancer Research. “How we might be able to use everything from computational modeling and data science to technological innovation to equalize access to health is one area that I care a lot about.”

Hammond’s research focuses on developing novel polymers and nanomaterials for a variety of applications in drug delivery, noninvasive imaging, solar cells, and battery technology. Using techniques for building polymers with highly controlled architectures, she has designed drug-delivering nanoparticles that can home in on tumors, as well as polymer films that dramatically improve the efficiency of methanol fuel cells.

As an MIT faculty member and mentor to graduate students, Hammond has worked to increase opportunities for underrepresented minorities in science and engineering fields. That is a goal she also hopes to pursue in her new role.

“There’s a lot of work to be done when we look at the low numbers of students of color who are actually going on to science and engineering fields,” she says. “When I think about my work related to increasing diversity in those areas, part of the reason I do it is because that’s where we gain excellence, and where we gain solutions and the foresight to work on the right problems. I also think that it’s important for there to be broad access to the power that science brings.”

Hammond, who earned both her bachelor’s degree and PhD from MIT, has been a member of the faculty since 1995. She has been a full professor since 2006 and has chaired the Department of Chemical Engineering since 2015. Earlier this year, she was named an Institute Professor, MIT’s highest faculty honor. She is also one of only 25 people who have been elected to all three National Academies — Engineering, Science, and Medicine.

She has previously served on the U.S. Secretary of Energy Scientific Advisory Board, the NIH Center for Scientific Review Advisory Council, and the Board of Directors of the American Institute of Chemical Engineers. She also chaired or co-chaired two committees that contributed landmark reports on gender and race at MIT: the Initiative for Faculty Race and Diversity, and the Academic and Organizational Relationships Working Group.

Institute Professor Paula Hammond, head of MIT’s Department of Chemical Engineering, has been selected to serve on the President's Council of Advisors on Science and Technology, “a group of external advisers tasked with making science, technology and innovation policy recommendations to the White House and the president,” reports Alexis Gravely for Inside Higher Ed. Professors Maria Zuber, MIT vice president for research, and Eric Lander, the president’s science adviser and director of the White House Office of Science and Technology Policy, are two of the co-chairs for the council.