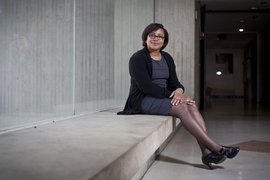 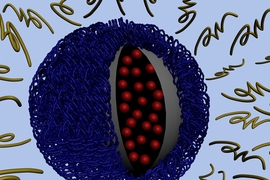 ↓ Download Image
Caption: The outer layer of this nanoparticle (in yellow) falls off in an acidic environment.
Credits: Image: Stephen Morton

Caption:
The outer layer of this nanoparticle (in yellow) falls off in an acidic environment.
Credits:
Image: Stephen Morton
MIT chemical engineers have designed a new type of drug-delivery nanoparticle that exploits a trait shared by almost all tumors: They are more acidic than healthy tissues.

Such particles could target nearly any type of tumor, and can be designed to carry virtually any type of drug, says Paula Hammond, a member of the David H. Koch Institute for Integrative Cancer Research at MIT and senior author of a paper describing the particles in the journal ACS Nano.

Like most other drug-delivering nanoparticles, the new MIT particles are cloaked in a polymer layer that protects them from being degraded by the bloodstream. However, the MIT team, including lead author and postdoctoral associate Zhiyong Poon, designed this outer layer to fall off after entering the slightly more acidic environment near a tumor. That reveals another layer that is able to penetrate individual tumor cells.

In the ACS Nano paper, which went online April 23, the researchers reported that, in mice, their particles can survive in the bloodstream for up to 24 hours, accumulate at tumor sites and enter tumor cells.

The new MIT approach differs from that taken by most nanoparticle designers. Typically, researchers try to target their particles to a tumor by decorating them with molecules that bind specifically to proteins found on the surface of cancer cells. The problem with that strategy is that it’s difficult to find the right target — a molecule found on all of the cancer cells in a particular tumor, but not on healthy cells. Also, a target that works for one type of cancer might not work for another.

Hammond and her colleagues decided to take advantage of tumor acidity, which is a byproduct of its revved-up metabolism. Tumor cells grow and divide much more rapidly than normal cells, and that metabolic activity uses up a lot of oxygen, which increases acidity. As the tumor grows, the tissue becomes more and more acidic.

To build their targeted particles, the researchers used a technique called “layer-by-layer assembly.” This means each layer can be tailored to perform a specific function.

When the outer layer (made of polyethylene glycol, or PEG) breaks down in the tumor’s acidic environment, a positively charged middle layer is revealed. That positive charge helps to overcome another obstacle to nanoparticle drug delivery: Once the particles reach a tumor, it’s difficult to get them to enter the cells. Particles with a positive charge can penetrate the negatively charged cell membrane, but such particles can’t be injected into the body without a “cloak” of some kind because they would also destroy healthy tissues.

The polymer coating (light blue) is shed as the particle approaches a tumor, exposing positive charges. Those charges help the particle be absorbed through the tumor cell membrane.
Image: Stephen Morton

The nanoparticles’ innermost layer can be a polymer that carries a cancer drug, or a quantum dot that could be used for imaging, or virtually anything else that the designer might want to deliver, says Hammond, who is the Bayer Professor of Chemical Engineering at MIT.

Other researchers have tried to design nanoparticles that take advantage of tumors’ acidity, but Hammond’s particles are the first that have been successfully tested in living animals.

Jinming Gao, professor of oncology and pharmacology at the University of Texas Southwestern Medical Center, says it is “quite clever” to use layer-by-layer assembly to create particles with a protective layer that can be shed when the particles reach their targets. “It is a nice proof of concept,” says Gao, who was not part of the research team. “This could serve as a general strategy to target acidic tumor microenvironment for improved drug delivery.”

The researchers are planning to further develop these particles and test their ability to deliver drugs in animals. Hammond says she expects it could take five to 10 years of development before human clinical trials could begin.

Hammond’s team is also working on nanoparticles that can carry multiple payloads. For example, the outer PEG layer might carry a drug or a gene that would “prime” the tumor cells to be susceptible to another drug carried in the particle’s core.