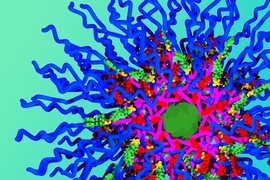 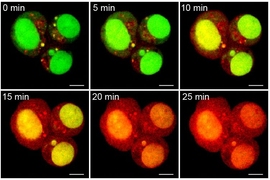 Caption:
The particles were designed to release doxorubicin when exposed to ultraviolet light. Here, ovarian cancer cells turn red as the doxorubicin is released over time.
Credits:
Image courtesy of Erik Dreaden and Kevin Shopsowitz

Now MIT chemists have devised a new way to build such nanoparticles, making it much easier to include three or more different drugs. In a paper published in the Journal of the American Chemical Society, the researchers showed that they could load their particles with three drugs commonly used to treat ovarian cancer.

“We think it’s the first example of a nanoparticle that carries a precise ratio of three drugs and can release those drugs in response to three distinct triggering mechanisms,” says Jeremiah Johnson, an assistant professor of chemistry at MIT and the senior author of the new paper.

Such particles could be designed to carry even more drugs, allowing researchers to develop new treatment regimens that could better kill cancer cells while avoiding the side effects of traditional chemotherapy. In the JACS paper, Johnson and colleagues demonstrated that the triple-threat nanoparticles could kill ovarian cancer cells more effectively than particles carrying only one or two drugs, and they have begun testing the particles against tumors in animals.

Longyan Liao, a postdoc in Johnson’s lab, is the paper’s lead author.

Putting the pieces together

Johnson’s new approach overcomes the inherent limitations of the two methods most often used to produce drug-delivering nanoparticles: encapsulating small drug molecules inside the particles or chemically attaching them to the particle. With both of these techniques, the reactions required to assemble the particles become increasingly difficult with each new drug that is added.

Combining these two approaches — encapsulating one drug inside a particle and attaching a different one to the surface — has had some success, but is still limited to two drugs.

Johnson set out to create a new type of particle that would overcome those constraints, enabling the loading of any number of different drugs. Instead of building the particle and then attaching drug molecules, he created building blocks that already include the drug. These building blocks can be joined together in a very specific structure, and the researchers can precisely control how much of each drug is included.

Each building block consists of three components: the drug molecule, a linking unit that can connect to other blocks, and a chain of polyethylene glycol (PEG), which helps protect the particle from being broken down in the body. Hundreds of these blocks can be linked using an approach Johnson developed, called “brush first polymerization.”

“This is a new way to build the particles from the beginning,” Johnson says. “If I want a particle with five drugs, I just take the five building blocks I want and have those assemble into a particle. In principle, there’s no limitation on how many drugs you can add, and the ratio of drugs carried by the particles just depends on how they are mixed together in the beginning.”

For this paper, the researchers created particles that carry the drugs cisplatin, doxorubicin, and camptothecin, which are often used alone or in combination to treat ovarian cancer.

Each particle carries the three drugs in a specific ratio that matches the maximum tolerated dose of each drug, and each drug has its own release mechanism. Cisplatin is freed as soon as the particle enters a cell, as the bonds holding it to the particle break down on exposure to glutathione, an antioxidant present in cells. Camptothecin is also released quickly when it encounters cellular enzymes called esterases.

The third drug, doxorubicin, was designed so that it would be released only when ultraviolet light shines on the particle. Once all three drugs are released, all that is left behind is PEG, which is easily biodegradable.

This approach “represents a clever new breakthrough in multidrug release through the simultaneous inclusion of different drugs, through distinct chemistries, within the same … platform,” says Todd Emrick, a professor of polymer science and engineering at the University of Massachusetts at Amherst who was not involved in the study.

Working with researchers in the lab of Paula Hammond, the David H. Koch Professor of Engineering and a member of MIT’s Koch Institute for Integrative Cancer Research, the team tested the particles against ovarian cancer cells grown in the lab. Particles carrying all three drugs killed the cancer cells at a higher rate than those that delivered only one or two drugs.

Johnson’s lab is now working on particles that carry four drugs, and the researchers are also planning to tag the particles with molecules that will allow them to home to tumor cells by interacting with proteins found on the cell surfaces.

Johnson also envisions that the ability to reliably produce large quantities of multidrug-carrying nanoparticles will enable large-scale testing of possible new cancer treatments. “It’s important to be able to rapidly and efficiently make particles with different ratios of multiple drugs, so that you can test them for their activity,” he says. “We can’t just make one particle, we need to be able to make different ratios, which our method can easily do.”

Other authors of the paper are graduate students Jenny Liu and Stephen Morton, and postdocs Erik Dreaden and Kevin Shopsowitz.

The research was funded by the MIT Research Support Committee, the Department of Defense Ovarian Cancer Research Program Teal Innovator Award, the National Institutes of Health, the National Sciences and Engineering Research Council, and the Koch Institute Support Grant from the National Cancer Institute.