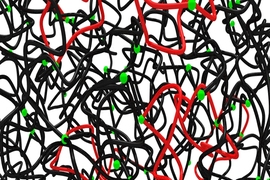 ↓ Download Image
Caption: In this simulation of a polymer network, the red segments represent polymers that have looped onto themselves.
Credits: Image: Jeremiah A. Johnson and Mitchell Wang

Caption:
In this simulation of a polymer network, the red segments represent polymers that have looped onto themselves.
Credits:
Image: Jeremiah A. Johnson and Mitchell Wang
Many of the objects we encounter are made of polymers — long chains of repeating molecules. Networks of polymers form manmade materials such as plastics, as well as natural products such as rubber and cellulose.

Within all of these polymeric materials, there are structural flaws at the molecular level. To form an ideal network, each polymer chain would bind only to another chain. However, in any real polymeric material, a significant fraction of the chains instead bind to themselves, forming floppy loops.

“If your material properties depend on having polymers connected to each other to form a network, but you have polymers folded around and connected to themselves, then those polymers are not part of the network. They weaken it,” says Jeremiah A. Johnson, an assistant professor of chemistry at MIT.

Johnson and his colleagues have now developed, for the first time, a way to measure how many loops are present in a given polymer network, an advance they believe is the first step toward creating better materials that don’t contain those weak spots.

Huaxing Zhou, an MIT postdoc, is the lead author of a paper describing the new technique in this week’s issue of the Proceedings of the National Academy of Sciences. Other authors are visiting researcher Jiyeon Woo, chemistry graduate student Alexandra Cok, chemical engineering graduate student Muzhou Wang, and Bradley Olsen, an assistant professor of chemical engineering.

Although polymer chemists have known about these loops since the 1940s, they have had no way to count them until now. In the new paper, the researchers measured the percentage of loops in a gel, but their approach could be used for nearly any type of polymer network, Johnson says.

To measure the number of loops, the researchers first design polymer chains that incorporate a chemical bond, in a specific location, that can be broken using hydrolysis. Once the polymer crosslinks into a gel network, the researchers treat it with a base that cleaves this chemical bond, known as an ester. (Other degradation methods, such as enzymes or light, could also be used.)

Because they know where the break points are, the researchers can predict the percentages of the four different degradation products they should expect to find in an ideal, no-loop network. By measuring the quantity of each degradation product and comparing it with the ideal, they can figure out what fraction of the polymer formed loops.

They found that the percentage of polymer loops ranges from about 9 percent to nearly 100 percent, depending on the concentration of polymers in the starting material and other factors.

“Even in the best material we can make, 9 percent of its junctions are wasted as loops, which tells us that if can figure out a way to reduce loop formation, we’d have a 9 percent improvement in material properties,” Johnson says.

Christopher Bielawski, a professor of chemistry at the University of Texas at Austin, says the new technique overcomes longstanding limitations in chemists’ understanding of the exact structures of polymers.

“The technique is a beautiful combination of experiment, theory and state-of-the-art analytics that takes the field a giant step toward sorting out a problem of tremendous importance,” says Bielawski, who was not part of the research team.

The researchers are now looking for ways to reduce the number of loops by altering the mixture of polymers used to produce a material, as well as the reaction conditions. They are also planning to use their method to study interactions between cells and biological materials. It has already been shown that at the micron scale, cells behave differently depending on the mechanical properties of their environment, such as stiffness.

The research was funded by the MIT Department of Chemistry, MIT’s Institute for Soldier Nanotechnologies, and a National Defense Science and Engineering Graduate Fellowship.