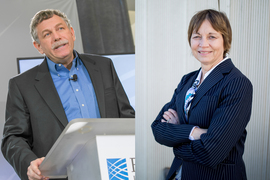 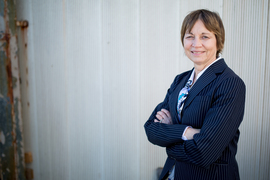 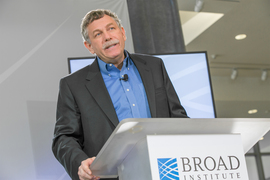 Lander has been named Presidential Science Advisor, a position he will assume soon after Biden’s inauguration on Jan. 20. He has also been nominated as director of the Office of Science and Technology Policy (OSTP), a position that requires Senate confirmation.

Biden intends to elevate the Presidential Science Advisor, for the first time in history, to be a member of his Cabinet.

Zuber has been named co-chair of the President’s Council of Advisors on Science and Technology (PCAST), along with Caltech chemical engineer Frances Arnold, a 2018 winner of the Nobel Prize in chemistry. Zuber and Arnold will be the first women ever to co-chair PCAST.

Lander, Zuber, Arnold, and other appointees will join Biden in Wilmington, Delaware, on Saturday afternoon, where the president-elect will introduce his team of top advisors on science and technology, domains he has declared as crucial to America’s future. Biden has charged this team with recommending strategies and actions to ensure that the nation maximizes the benefits of science and technology for America’s welfare in the 21st century, including addressing health needs, climate change, national security, and economic prosperity.

“From Covid-19 to climate change, cybersecurity to U.S. competitiveness in innovation, the nation faces urgent challenges whose solutions depend on a broad and deep understanding of the frontiers of science and technology. In that context, it is enormously meaningful that science is being raised to a Cabinet-level position for the first time,” MIT President L. Rafael Reif says. “With his piercing intelligence and remarkable record as scientific pioneer, Eric Lander is a superb choice for this new role. And given her leadership of immensely complex NASA missions and her deep engagement with the leading edge of dozens of scientific domains as MIT’s vice president for research, it is difficult to imagine someone more qualified to co-chair PCAST than Maria Zuber. This is a banner day for science, and for the nation.”

Lander will take a leave of absence from MIT, where he is a professor of biology, and the Broad Institute, which he has led since its 2004 founding. The Broad Institute announced today that Todd Golub, currently its chief scientific officer as well as a faculty member at Harvard Medical School and an investigator at the Dana-Farber Cancer Institute, will succeed Lander as director.

Zuber, the E.A. Griswold Professor of Geophysics in MIT’s Department of Earth, Atmospheric, and Planetary Sciences, will continue to serve as the Institute’s vice president for research, a position she has held since 2013.

Eric S. Lander, 63, has served since 2004 as founding director of the Broad Institute of MIT and Harvard. A geneticist, molecular biologist, and mathematician, he was one of the principal leaders of the international Human Genome Project from 1990 to 2003, and is committed to attracting, teaching, and mentoring a new generation of scientists to fulfill the promise of genomic insights to benefit human health.

From 2009 to 2017, Lander informed federal policy on science and technology as co-chair of PCAST throughout the two terms of President Barack Obama.

Trained as a mathematician, Lander earned a BA in mathematics from Princeton University in 1978. As a Rhodes Scholar from 1978 to 1981, he attended Oxford University, where he earned his doctorate in mathematics. Lander served on the Harvard Business School faculty from 1981 to 1990, teaching courses on managerial economics, decision analysis, and bargaining.

In 1983, his younger brother, Arthur, a developmental neurobiologist, suggested that, with his interest in coding theory, Lander might be interested in how biological systems, including the brain, encode and process information. Lander began to audit courses at Harvard and to moonlight in laboratories around Harvard and MIT, learning about molecular biology and genetics.

Lander’s honors and awards include the MacArthur Fellowship, the Breakthrough Prize in Life Sciences, the Albany Prize in Medicine and Biological Research, the Gairdner Foundation International Award of Canada, and MIT’s Killian Faculty Achievement Award. He was elected as a member of the U.S. National Academy of Sciences in 1997 and of the U.S. Institute of Medicine in 1999.

The daughter of a Pennsylvania state trooper and the granddaughter of coal miners, Maria T. Zuber, 62, has been a member of the MIT faculty since 1995 and MIT’s vice president for research since 2013. She has served since 2012 on the 24-member National Science Board (NSB), the governing body of the National Science Foundation, serving as NSB chair from 2016 to 2019.

Zuber’s own research bridges planetary geophysics and the technology of space-based laser and radio systems. She was the first woman to lead a NASA spacecraft mission, serving as principal investigator of the space agency’s Gravity Recovery and Interior Laboratory (GRAIL) mission, an effort launched in 2008 to map the moon’s gravitational field to answer fundamental questions about the moon’s evolution and internal composition. In all, Zuber has held leadership roles associated with scientific experiments or instrumentation on nine NASA missions since 1990.

As MIT’s vice president for research, Zuber is responsible for research administration and policy. She oversees more than a dozen interdisciplinary research centers, including the David H. Koch Institute for Integrative Cancer Research, the Plasma Science and Fusion Center, the Research Laboratory of Electronics, the Institute for Soldier Nanotechnologies, the MIT Energy Initiative (MITEI), and the Haystack Observatory. She is also responsible for MIT’s research integrity and compliance, and plays a central role in research relationships with the federal government.

“Many of the most pressing challenges facing the nation and the world will require breakthroughs in science and technology,” Zuber says. “An essential element of any solution must be rebuilding trust in science, and I’m thrilled to have the opportunity to work with President-elect Biden and his team to drive positive change.”

Zuber holds a BA in astronomy and geology from the University of Pennsylvania, awarded in 1980, and an ScM and PhD in geophysics from Brown University, awarded in 1983 and 1986, respectively. She has received awards and honors including MIT’s Killian Faculty Achievement Award; the American Geophysical Union’s Harry H. Hess Medal; and numerous NASA awards, including the Distinguished Public Service Medal and the Outstanding Public Leadership Medal. She was elected as a member of the National Academy of Sciences in 2004.

Golub served as a leader of the Whitehead Institute/MIT Center for Genome Research, the precursor to the Broad Institute. He has also been an investigator with the Howard Hughes Medical Institute, and has served as chair of numerous scientific advisory boards, including at St. Jude Children’s Research Hospital and the National Cancer Institute’s Board of Scientific Advisors.

Golub is also an entrepreneur, having co-founded several biotechnology companies to develop diagnostic and therapeutic products. He has created and applied genomic tools to understand the basis of disease, and to develop new approaches to drug discovery. He has made fundamental discoveries in the molecular basis of human cancer, and has helped develop new approaches to precision medicine.

“Broad is in a stronger scientific and cultural position today than at any point in our 16-year history,” Golub says. “Moreover, the pandemic has pushed us to think differently about nearly every aspect of how we collaborate and deliver on our scientific mission. We are well-positioned to work with the larger scientific community to confront some of the most urgent challenges in biomedicine: from developing novel diagnostics and therapeutics for infectious diseases and cancer, to understanding the genetic basis of cardiovascular disease and mental illness. I am honored to serve as director of this remarkable institution.”

Members of the Broad Institute’s Board of Directors thanked Lander for his lengthy service and expressed optimism in Golub’s ability to build upon that foundation.

“Todd’s deep knowledge of the Broad Institute community, its science, and its mission to propel the understanding and treatment of disease make him the perfect choice for the Institute’s next director,” says Louis Gerstner, Jr., chair of the Broad Institute Board of Directors. “Todd is well-positioned to lead the Institute and our key scientific collaborations forward, and the board is highly confident he will continue the Broad's culture of innovation, collegiality, and constant renewal.”

Broad board member Shirley Tilghman, professor of molecular biology and public policy and president emerita of Princeton University, adds: “In its 16 years, the Broad has become one of the most unique institutions in the biomedical ecosystem. Under Eric’s and Todd’s leadership, it has developed powerful new methods and made many contributions to genomic medicine that will benefit human health.”

CBS News spotlights how two MIT researchers have been named to key roles on the Biden administration’s science team. Prof. Eric Lander, president and founding director of the Broad Institute, has been nominated to lead the Office of Science and Technology Policy, and Maria Zuber, MIT’s vice president for research, will co-chair the President's Council of Advisors on Science and Technology. Zuber said she hopes to "restore trust in science, and pursue breakthroughs that benefit all people."

Prof. Eric Lander, president and founding director of the Broad Institute, and Maria Zuber, MIT’s vice president for research, have been nominated to leading roles on the Biden administration's science team, report Nidhi Subbaraman and Alexandra Witze for Nature. “These are excellent appointments, highly qualified and experienced, and well grounded in science,” says Rita Colwell, a professor at University of Maryland at College Park and former director of the National Science Foundation

Prof. Eric Lander, president and founding director of the Broad Institute, has been nominated by President-elect Joe Biden to lead the Office of Science and Technology Policy, which Biden will make a Cabinet-level position, reports Sarah Kaplan for The Washington Post. Maria Zuber, MIT’s vice president for research, will co-chair the President’s Council of Advisors on Science and Technology.

New York Times reporter Carl Zimmer writes that Prof. Eric Lander, president and founding director of the Broad Institute, has been nominated to serve as director of the Office of Science and Technology Policy and to serve as a presidential science advisor. MIT Vice President for Research Maria Zuber will co-chair the President’s Council of Advisors on Science and Technology.

AP reporter Seth Borenstein writes about how President-elect Joe Biden is nominating Prof. Eric Lander of the Broad Institute to serve as his chief science officer and lead the Office of Science and Technology Policy, and has selected Maria Zuber, vice president for research at MIT, to co-chair the President’s Council of Advisors on Science and Technology. Francis Collins, director of the NIH, called Lander, “brilliant, visionary, exceptionally creative and highly effective in aspiring others. I predict he will have a profound transformational effect on American science.”

Chronicling the rapid pace of genomics