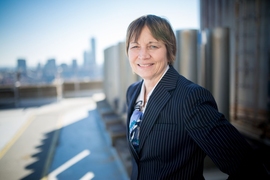 Maria T. Zuber, vice president for research and the E.A. Griswold Professor of Geophysics within the Department of Earth, Atmospheric and Planetary Sciences, recently published an op-ed in The Washington Post that described her personal history growing up in eastern Pennsylvania’s coal country and argued for a strategy to support coal industry workers as the world transitions to new, clean energy sources. Zuber spoke with MIT News to share her thoughts on how we can address climate change while also improving the economic fortunes of coal communities.

Q: You grew up in Carbon County, Pennsylvania, a place that got its name because of the discovery of anthracite coal there in the late 18th century. Can you tell us about your experience growing up in coal country and what inspired you to write about it?

A: Both of my grandfathers were coal miners. They both contracted black lung disease, one dying much too young and the other living longer but suffering mightily from both health problems and underemployment. My grandfathers worked in the mines at a time when the coal industry in eastern Pennsylvania was in the midst of a long decline. My home town, Summit Hill, Pennsylvania, was a place where prosperity and economic opportunity vanished with the decline of the anthracite industry.

During the recent presidential campaign and subsequent to the election, I’ve read a lot about how the intellectual elite doesn’t understand the plight of blue collar workers who have lost well-paying jobs and, with that, their hope for the future. And I thought, “Wait a minute, that’s the story of my family.” The more I thought about it, the more I realized that I was in a position to shine a light on this issue and maybe even contribute to improving the situation.

Q: How does this personal history you’ve described affect the way that you think about climate change?

A: On the one hand, I can really understand why we hear so much about the “war on coal.” That’s a product of the deep anxiety that people feel when they experience such seismic changes caused by things like changes in the global supply and demand for coal, or automation in mining that makes it possible to get more coal with fewer workers. People do feel like they are under attack, that their way of life is under attack. We need to really try to recognize that.

On the other hand, my life’s passion, and my career focus, has been science. And as I’ve said many times, the scientific evidence is overwhelming: If we keep emitting carbon dioxide into the atmosphere, then global temperatures are going to continue to rise, and that carries with it unacceptable risks — disruptions to food and water supplies, rising sea levels that could put coastal cities at risk, and so on.

So the way I look at it is that we have two responsibilities: We need to take urgent action to address climate change by moving to clean energy, and we also need to take care of the people who do difficult and dangerous work so that we can power our modern economy and enjoy our standard of living.

Q: With this dual challenge in mind, what do you think we should we do for coal communities?

A: The good news is that, in the long run, transforming our energy system so that it emits zero carbon will create more jobs than it destroys. But if we don’t plan this transformation in an orderly way, then we will see avoidable negative economic impacts on coal communities.

As a start, I propose three things we can do. First, we should aggressively pursue carbon capture and storage technology, which catches carbon dioxide from coal power plants before it is released into the atmosphere and stores it underground. We’ll need to improve capture efficiency, lower the deployment costs, and better understand the environmental impacts. The MIT Energy Initiative has launched a low-carbon energy center focused on these challenges.

Second, we should expand the use of coal for things that, unlike combustion and steel production, do not produce significant carbon emissions. About nine-tenths of coal production is used for electric power. But researchers here at MIT and at other research institutions around the country are exploring whether coal can be used more widely as a material for the production of carbon fiber, batteries, electronics, and even solar panels.

Third, though, we have to recognize that even if carbon capture becomes practicable and we expand other uses for coal, the industry’s fortunes will never fully revive, because of factors like cheap natural gas and the rapidly declining costs of wind and solar energy. So we need to support policies that would promote economic development; help coal workers find employment in other industries, including renewables; and preserve healthcare and retirement benefits for retired coal miners. Fortunately, these are all policies with bipartisan support.

The risks of climate change make it clear that we have to stop burning fossil fuels, especially without the use of carbon capture and storage technologies. But we do have choices to make about how we transition to clean energy. We can choose to do it fast enough to head off some of the worst risks of climate change, and we can choose to do it as fairly as possible for communities that have long depended on fossil fuels. These are not impossible challenges, but they do require that we all work together. I think this is the kind of problem that we at MIT are attracted to tackle. We won’t solve the climate change problem without solving the jobs problem.

Writing for The Washington Post, Prof. Maria Zuber, MIT’s vice president for research, outlines how the U.S. can reduce coal emissions without “declaring war on coal communities.” Zuber argues that the U.S. must “commit to helping the workers and communities that are hurt when coal mines and coal plants reduce their operations or shut down.”